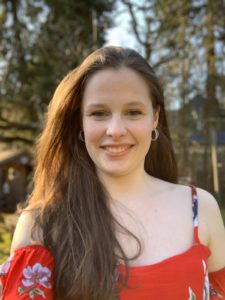 Julie is a current European Studies student with a focus on Political Science and Spanish Studies at the University of Passau. She has spent two semesters in Madrid studying International Relations. As a student of European Studies, she is highly interested in bringing the European Union closer to its citizens, especially to young people. That is why she has been working for Equipo Europa, a pro-European student organization in Spain during her semesters abroad. She has participated in many events of the organization in order to learn more about the EU in a more practical way than in her studies, and to discuss current topics of the EU with other young people. She was one of two Ambassadors of Madrid of #UnÁrbolPorEuropa (A Tree for Europe), an initiative promoting the protection of the environment at a local level, aiming to convince mayors all over Spain to plant a tree in their town, to give visibility to sustainable development at the local level, and to involve young people in decision-making processes regarding local sustainability. Moreover, she was a member of a student organization in Passau in which she learned more about the political situation in different countries from Hispanic America, listening to and debating the presentations held by international students from these countries. Since a couple of months, she is also taking online classes of the Global Campus for Human Rights. In 2018, she worked as a fundraiser for Amnesty International.

With her work at the European Student Think Tank, Julie hopes to bring young European citizens closer to one another and to encourage them to listen to each other and to talk about problems in our societies. Also, she would like to provide a platform for discussions about the chances of and criticism towards the EU. In addition, she would like to promote the exchange between young Europeans and young people from other parts of the world about urgent global topics.