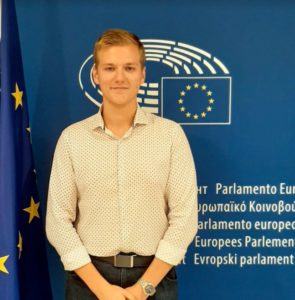 Aleksandar Karatosho is an undergraduate student at the Faculty of Economics at the University of Ss. Cyril and Methodius in Skopje. He has extensive experience in multiple national & international civil society organizations, through which he took part in more than 35 international programs & organized numerous events, workshops & projects. In the past years, Aleksandar has been a scholar of the German political think tank foundation Konrad Adenauer, where he also held the position of Coordinator of Konrad Adenauer Alumni & Scholars – KAAS Macedonia, a member of the Presidency of the Student Parliament at the University of Ss. Cyril and Methodius & a Secretary of People to People International – PTPI Skopje Community Chapter.

Currently, he is one of the Young European Ambassadors from the Western Balkans appointed by the European Union, but also a member of European Democracy Youth Network (EDYN) & the Euro-Atlantic Council of Macedonia. Additionally, Aleksandar is a Founder & President of the non-profit civil society organization Youth Empowerment Association – YEA, focused on developing the capacities of the young people on various topics & a Founder & Director of the Karatosho Foundation, which is working on active citizenship, environmental protection & cultural heritage. Furthermore, he is the creator of KaraPlast, which is a green & social startup that became the first Macedonian semifinalist of the European Social Innovation Competition organized by the European Commission.

Feel free to reach out to him for additional information, involvement or collaboration