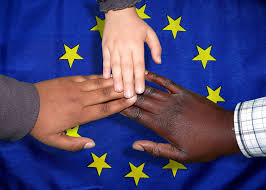 As part of my traineeship at the European Parliament, I was afforded the opportunity to organise a panel event on refugee integration with the support of the Schuman Traineeship Committee.

In the last few years, Europe has become a home for many people fleeing conflict and war from countries such as Syria and Iraq. This has led to the springing up of grassroots’ movements aimed at fostering integration and inclusion between locals and these newcomers. Last Thursday, a number of organisations gathered in the European Parliament to discuss these initiatives in Brussels.

Representatives from Tandem, SINGA, Refugees Got Talent (RGT) and SB Overseas participated in the panel. Chloé Overlau from SINGA opened the panel by outlining the asylum procedure and SINGA’s work to foster integration by linking locals to those with a refugee background through its buddy program, workshops and events.

This formal introduction was brought to life in the form of Zaid Aleefo, a musician from Iraq, who used his own life experiences to demonstrate how integration occurs. He explained how he connected with locals in Brussels through his activities with Refugees Got Talent (RGT) after fleeing conflict in Iraq. He recounted the story of when arriving in Park Maximilian, the first thing he looked for was a guitar. He, furthermore, stressed that the isolated locations of the refugee camps such as the camp he stayed in for ten months in Liège, as well as the lack of funds prevented early integration. Between a weekly allowance of €7.40 and receiving two single travel tickets once-a-month, it proved difficult to meet locals. Through getting involved with RGT, an organisation which facilitates the integration of refugees and asylum-seekers through art and music, he was able to travel to Brussels as his travel costs were covered by the organisation. This gave him the opportunity to not only meet new people and expand his social network, but also allowed him to follow his passion by playing in a number of venues such as Bozar and Ancienne Belgique.

Veronica Lari, from SB Overseas, an organisation which facilitates refugee and asylum-seeker integration through weekend programmes run at reception centres in Brussels, highlighted a different aspect of the importance of art and music: as a medium for expressing emotions and as a type of therapy. She drew attention to the importance of creating opportunities for the refugee youth and the host community to meet and participate actively in society, thus promoting integration through intercultural dialogue and active citizenship. SB OverSeas aimed to achieve this through running volunteer programmes in the refugee centres, thereby linking locals in Brussels with refugees and asylum-seekers.

Abdulmajid Abdulrahim, respresented Tandem, an organisation which facilitates refugee and asylum-seeker integration through short-term internship placements with European-level NGOs. After fleeing Syria, Abdulmajid’s first concern on arrival in Belgium was securing employment. He highlighted the barriers he faced in this regard, including the non-recognition of university degrees and language barriers. He emphasised that there needs to be a shift in focus, as with the majority of the basic needs of refugees and asylum-seekers being cared for, there needs to be a greater focus on their inclusion into the labour market. He emphasised that refugees are people ‘with skills and talent’ who require only ‘a little support’ in order to integrate. By providing more opportunities to enter the labour market, we will be fostering further integration.

There were a number of questions taken from the floor, one of them asking how integration does not go on to mean assimilation in practice. According to Zaid Aleefo, each culture can bring the best aspects of their own cultures and create an even richer society. This is especially relevant in a society such as Brussels, as highlighted by Chloé Overlau and Veronica Lari, as it is such an open and multicultural society. Veronica Lari further emphasised the importance of intercultural dialogue and the importance of understanding the different social and cultural codes.

The ongoing work of these organisations as well as the personal testimonies from Zaid and Abdulmajid showed that although there is a significant amount of work done by these and other organisations, there is an increased call for a shift of conversation towards inclusion and integration. This integration needs to begin as at an early stage. Fostering links between locals and refugee and asylum-seekers is an important step in integration and can be fostered through the platforms as offered by these organisations.They are leading the way of integration and there is a need for policies and actions to follow this on a greater scale.