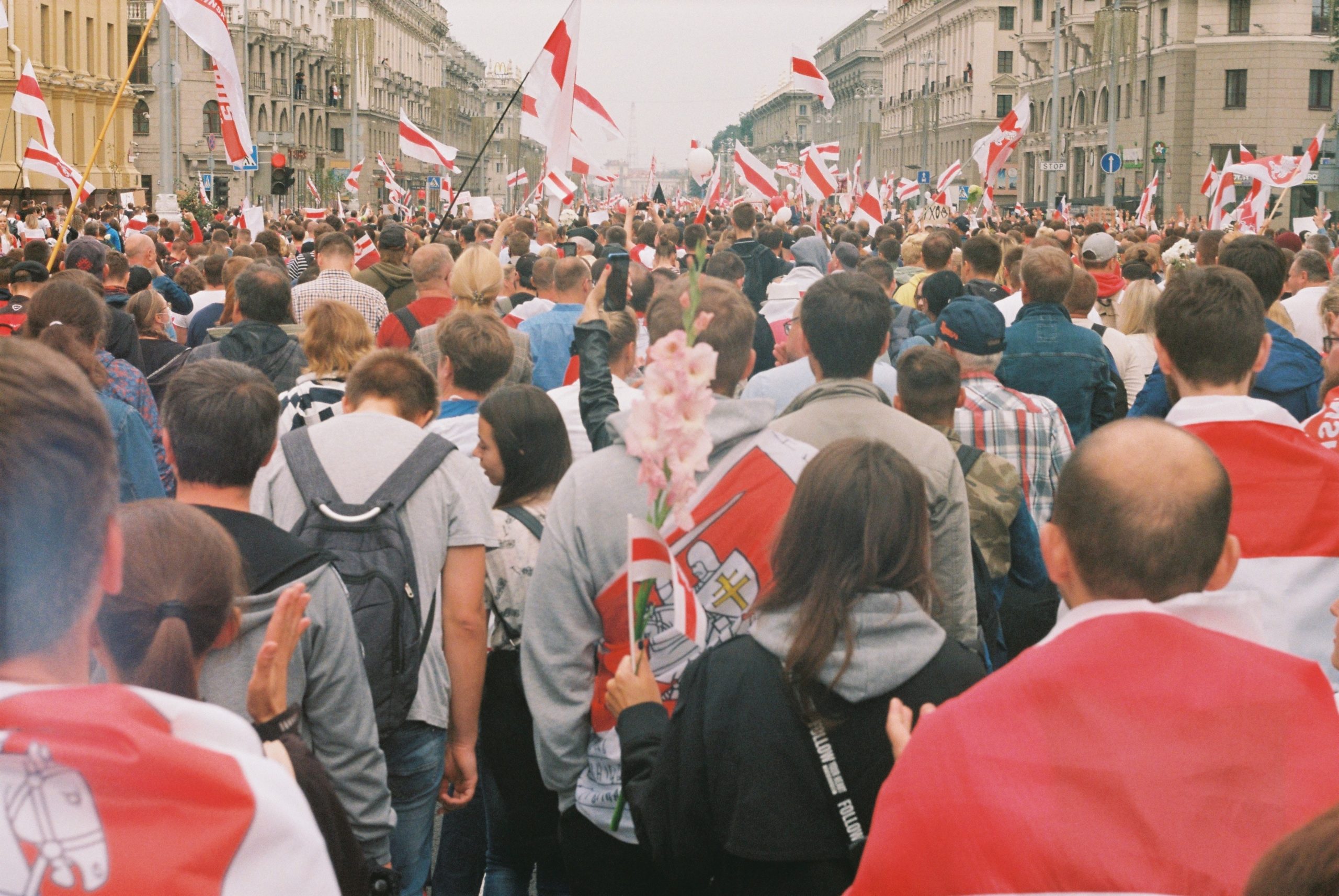 Does democracy lead to chaos? The answer to this widely disputed question stems from Alexander Lukashenko’s perspective as he was a person who took the lead of Belarus over a quarter of the century ago.  To date,  he neglects the ferocity and demands of his own people, who came out into the streets since the Presidential Elections after Lukashenko pulled the wool over people’s eyes declaring himself the winner.

To date, protests in Belarus have been following a foreseeable storyline of rigged elections followed by protests with brutalized civilians. “Bittersweet” might appropriately define the essence of these protests as it is sweet in the sense that it unified Belarusian people to an extent the world had never seen before and bitter because of the use of force where rights were violated  and people imprisoned. Lukashenko’s response to the situation in Belarus is alarming: no will for dialogue, nationwide arrests, kidnappings and intimidation of the opposition leaders, financial and legal pressure, grave human rights violations and blackmailing of all age groups.

From the start of this crisis, the European Union has been clear: “we do not recognise the results of the presidential elections and we consider Lukashenko an illegitimate President”, “we reject his use of violence and the repression of fundamental and democratic rights” and “we see an inclusive political dialogue with new elections that must be free and fair, as the only way forward” (“Belarusians courageously demand”, 2020).

EU leaders have made announcements ever since civil unrest started in Belarus.- European Council President, Charles Michel stated that “violence has to stop and a peaceful and inclusive dialogue has to be launched”. EU Commission President, Ursula Von der Leyen emphasized that “the people of Belarus want change and they want it now” further explaining the EU’s approach by stating that  “Belarusian people want democracy and new presidential elections as these elections were neither fair nor free.” (“The threat of new crackdown”, 2020)

Worried about appearances, the EU tried to back the protestors but whether the means justifying their action was enough or not remains a question for debate. Meanwhile, protests in Belarus continue for the 13th consecutive Sunday with the hope that one day it will finally lead to victory.

As of today, due to the second wave of COVID-19, American presidential elections and the Nagorno-Karabakh conflict, the Belarusian case joined the list of non-urgent issues.

Belarus with 9.5 million inhabitants, shares 1,250 kilometres of land bordering the EU. It  is a key element of the EU Neighbourhood Policy. The Eastern Partnership however is considered to be one of the most important instruments of the European Union’s eastern policy, involving Belarus alongside Armenia, Azerbaijan, Georgia, the Republic of Moldova and Ukraine.

EU-Belarus relations have been inconsistent over the years after Lukashenko came to power in 1994. Fundamental freedoms and democratic principles were openly ignored and violated, which later on after the 2010 elections led the EU to enforce restrictive measures against the regime (“Belarus: violence must stop”, 2020). The situation seemed to improve after 2015 when the Belarusian government showed a tendency to release  political prisoners. In February 2016, the EU lifted most of the restrictive measures against Belarus until  2020  where it supported measures to help the country further its economy, governance, environment and society. Over the past three years, Belarus has been participating actively in the multilateral formats of the Eastern Partnership and has also strengthened the bilateral relationship with the EU in line with the EU-Belarus Partnership Priorities. (“Facts and figures”, 2020)

As for the EU’s reaction to Belarus protests, four implementations occured:

1) Sanctions, intended to punish 40 people/entities responsible for the electoral fraud, the repression of peaceful protests and state-run brutality. The sanctions have not been adopted on the first voting day thanks to unanimity procedure, in particular because Cyprus refused to join the consensus (“Belarusians courageously demand”, 2020).  This scenario changed  on 2nd October 2020 when the EU offered a good deal to Cyprus;

2) National dialogue and the role of the Organisation for Security and Cooperation in Europe (OSCE) in which Lukashenko refused to engage with the European Union at any level;

3) Full review of the EU-Belarus relations;

4) EU support (€53 million of immediate support) to the Belarusian population which was the first action in line to be implemented. (“Belarusians courageously demand”, 2020)

EU 27 countries have had a different approach towards Belarus. More specifically, the Eastern part of the EU cares and stands for Belarus more openly. Lithuania for example gave refuge to Tsikhanouskaya as the protests unfolded while Estonia, Latvia and Poland are deeply involved in diplomatic efforts. Also, the Visegrad four countries (Czech Republic, Hungary, Poland and Slovakia) are actively calling for a political solution. (“The threat of new crackdown” , 2020)

From the Belarusian perspective the EU is capable of settling the situation in the country. That’s why Svetlana Tikhanovskaya, the main opposition leader, visited Brussels on the 21st of September 2020 and asked the EU to be “harsher and braver” after Cyprus blocked the sanctions (“Belarus: Opposition”, 2020).  Later, on 29 September, 2020 she met Emanuel Macron in Lithuania, where she was  promised by the French president to act as a mediator (Momtaz, 2020). Angela Merkel was met on 6 October, 2020, however information about the promises between the two leaders are unheard of to the wider public.(Opposition Leader Svetlana Tikhanovskaya Meets Angela Merkel In Berlin, 2020)

Belarus opposition leaders are still calling on the EU to act as they consider the sanctions to be just the beginning. Whether the EU intends to make any vital decisions continues to remain an open-ended question for debate.

Limitations of the EU today

The Belarus case once again made it clear that the scope of the EU’s action is limited due to lack of solidarity and cohesion.

Every country within the EU is driven by their national interests. The Cyprus action on the 21st of September this year is the perfect embodiment of it. The country used the sanctions issue as leverage and vetoed the EU decision on sanctioning certain entities in Belarus, stating that it would have continued keeping this standpoint until the similar move was made against Turkey for its energy exploration in the Mediterranean.  We might all notice that the case of Turkey wasn’t anyhow related to Belarus, but Cyrus had a different approach to it. Many EU  states were angered by what they saw as political “hostage-taking” by Cyprus (Rankin, 2020). Cyprus’s veto put the EU in a very challenging situation as they didn’t want to impose sanctions on Turkey. It would backfire and upset negotiations over energy reserves in the Eastern Mediterranean. Moreover, Turkey was also involved as Azerbaijan’s supporter in the Nagorno-Karabakh conflict, which is one of the hot spots today. The EU had to find an ideal medium in this situation and as a result of several hours of negotiations, EU leaders agreed on a statement of support for Cyprus and Greece, stating that if Turkey continued to react positively in talks with Cyprus and Greece, the bloc would “launch a positive political EU–Turkey agenda” with trade and customs incentives, more money and benefits for continued cooperation on migrant flows. Thus, the text, where the EU “strongly condemn[ed] violations of the sovereign rights of the Republic of Cyprus”, unlocked the Cypriot veto on Belarus. (Rankin, 2020)

These later developments disclosed some of the challenges the EU is facing today namely, failed clarity on the domestic agenda of its Member States, of their national interests and also an urgent reassessment of the decision-making procedures, at least on the sanctions section.

The main reasons of  the limitations of the Union are separation, different approaches and the unwillingness of exchange for Member States’ votes. These very limitations question the EU’s credibility because when quick action is needed, the EU is unable to react accordingly.

The Role of Russia in Belarus

Belarus protests and Lukashenko’s negligence cannot be discussed without mentioning Vladimir Vladimirovich Putin, who after meeting Lukashenko in Sochi on September 14 2020, announced that “Russian police force is ready to intervene if the protests get out of control”. (Rainsford, 2020)  Putin’s threat alerted the western world – High Representative of the Union for Foreign Affairs and Security Policy Josep Borrell and NATO Secretary-General Jens Stoltenberg responded to possible Russian interference, the first one called on Moscow to refrain from intervening in Belarus and to “respect the democratic choices” of the people of Belarus, while the second one insisted that Belarus must be allowed to decide its future without interference from Russia. (“Belarus crises”, 2020)

In order to assess the role of Russia in Belarus we should  answer to following questions:

How solid is Russian influence in Belarus?

Vladimir Putin openly supported Lukashenko motivated by the country’s desire to  take greater control over Belarus, and to have a say in Belarus’s affairs more similar to “soft-power annexation”. (“EU weighs Lukashenko”, 2020)

As we might already know, Putin and Lukashenko have had their disagreements, the greatest of these has been Belarus’s wariness towards Russian plans for deeper integration between both countries under the auspices of the “Union State” created by a 1999 treaty. Over the years, there have been speculations about Russia invading Belarus, for instance during the large-scale Zapad military exercise in 2017. For Russia, a familiar strongman is a much safer option than a democratically elected leader who might pursue a pro-European course and receive a warmer welcome from European leaders. (Järviniemi, 2020) That’s why Russia tries to always have an eye on what is happening in its immediate neighbour Belarus.

How strong is Belarus’ dependence on Russia?

We cannot neglect Belarus’s dependency on Russia for energy, and the economy. Besides, Russia accounts for nearly 40% of Belarusian exports and some 60% of imports as well (Järviniemi, 2020). Energy is a manipulative tool,  quite effectively used on separate occasions with different countries.

What if the dictatorship in Belarus survives?

Given Future scenarios, a weakened Lukashenko will become an easy target for Russian pressure as Belarus’s economic dependence and Russia’s preparedness for hybrid and military operations, paves way for a  much stronger set of carrots and sticks to offer Belarus than what the EU can hope for. (Järviniemi, 2020)

As such the EU is expected to confront  Russia about changes to its  “Near Abroad” countries.

Even though Belarus protests are not a  representation of a geopolitical issue, ideological turn or anti-Russian sentiment, they still instil fear both in the EU and in Russia. The former is afraid that the Ukraine scenario will be repeated, while the latter fears that protests will pivot the country from Russia towards Europe.

Strengthening the EU’s ability to act in world politics seems essential if Europe is to manage any future crisis of this nature better. Furthermore,  balancing is  important in order to  normalize the situation in Belarus as it  is an  opportunity for the EU to prove itself  as a meaningful player in Eastern Europe.

In terms of more agility in EU foreign policy, efforts should be made to expand the range of decisions that can be made without unanimity. This is a longstanding issue and was also referred by European Commission President, Ursula von der Leyen during her State of the Union speech where she demanded EU national leaders to set aside the unanimity requirement for foreign-policy decisions, at least on human rights and sanctions.(Herszenhorn et. al., 2020)

Most likely, changing unanimity to a qualified and simple majority would make EU foreign policy more effective. Questions on EU credibility and how Brussels functions are already quite often discussed, especially since migration and the COVID-19 crisis. An assessment for organization and changes within the EU in terms of the decision-making process is well needed as it allows the EU to  react more effectively to upcoming foreign policy challenges.