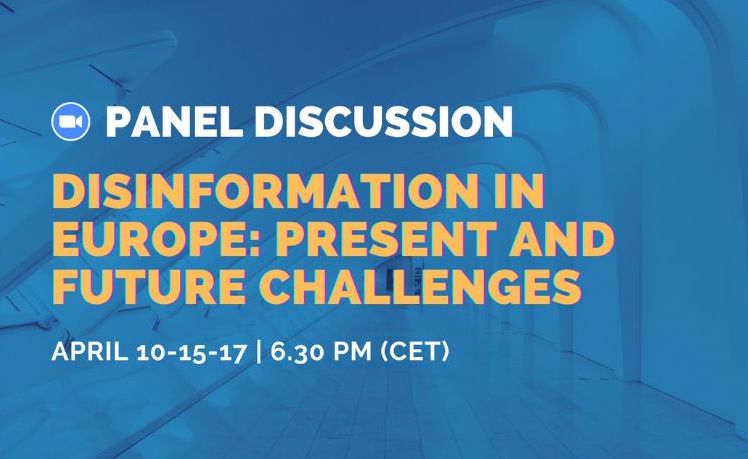 Throughout the event, the EST was indeed privileged to host a range of experts from across the globe. Each event was moderated by a member of the European Student Think Tank. The participation of over 40 people from diverse backgrounds illustrated the importance of this event. Throughout the event, the invited guest speakers were unanimous in their assertion that Disinformation is indeed a topic of importance today, and its understanding is central to combatting the challenges faced by Europe today. It was the belief of all speakers that disinformation poses a unique risk to the democratic values of the European Union.

Speaking at the first event, Professor Michela Ceccorulli, Senior Researcher at the University of Bologna, illustrated that disinformation used by political parties to further anti-immigrant sentiment exploited the inherent anti-migration stance built into the political conversation not just in Italy but across the EU. From the use of false data and statistics, and the reframing of anti-asylum sentiment not as an issue of human rights violations, but an issue of “combatting human trafficking”, disinformation has been used as  a tool to shift the conversation away from the core reasons behind migration to being used as a scaffolding for anti-immigrant rhetoric and bias.

The build-up of Russian troops on Ukraine’s Border, a matter of urgency across the EU and indeed the world, was the subject of some discussion at the second event entitled “Disinformation and Geopolitics”. We were joined by Professor Taras Kuzio, Professor at the National University Of Kiev, who was of the opinion that the current use of Disinformation by Russia stemmed from its Soviet past. He also demonstrated that the use of Disinformation goes beyond the sharing of false news, but that it generates hatred, xenophobia, and othering which then leads to gross violations of human rights, war and immense loss of life. This sentiment was supported by Mr. Jurgis Vilcinkas, Deputy of Division, Strategic Communications and information analysis of the European External Action Service. He demonstrated that disinformation is an essential tool in hybrid warfare and is indeed being used in the conventional military escalation pathways. Mr Vilcinkas emphasised that disinformation is much more common than we perceive and that the general public is, indeed, aware of being exposed to disinformation, and variations among member states of the EU could be explained by people not knowing that they are being exposed to disinformation.

No conversation around Disinformation is complete without a discussion around Social Media regulation. Our final session addressed the interplay between Disinformation and Social media, and it was our privilege to host MEP Maria Manuel Marques. Social Media, she stated clearly, needs regulation to protect democractic values, not regulation aimed towards curbing the right to free speech. She was clear in her speech and in the questions that followed that the regulation of social media centered on the idea of illegal content which aimed towards harming democratic values of the European Union.

For those in attendance, and indeed for the European Student Think Tank at large, the importance of understanding Disinformation is crucial to supporting the democratic principles that have shaped the EU. Throughout this event, it was clear that we must emphasise on the nefarious nature of disinformation and that combating disinformation, whether it is utilized by countries, or by private corporations, should be a pan-European effort. Some solutions were proposed throughout this event, such as the use of technology in combating disinformation through the use of peer-reviewed processes and crowdfunding as suggested by Mr Dmytro Potekhin, founder of Factology systems, to educating the public through debates and factual data as suggested by Diogo Andrade, Journalist and Specialist in Politics and Technology.