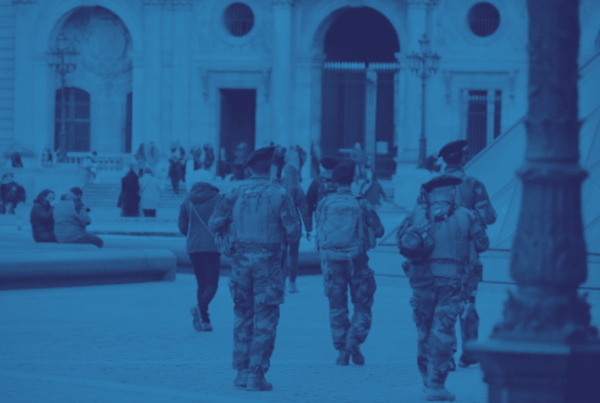 According to the 2021 Europol Report on the European Union (EU) Terrorism Situation, in 2020 a total of 57 terrorist attacks were reported in six member states, compared to 55 in 2019 and 69 in 2018 (Europol, 2021). Although Jihadi terrorism is one of the more widely discussed forms of terrorism, primarily due to the media’s high coverage of events related to it, other terrorist forms sometimes pose an even higher level of threat. According to the report, in 2020 Jihadi terrorism was only responsible for 14 out of all the attacks, while left-wing and anarchist-inspired attacks came first with 25 attacks. Ethno-nationalist and separatist-inspired groups were also responsible for 14 attacks, while the remaining four were attributed to right-wing militants(Europol, 2021). This article  examines the different sources of terrorism operating in Europe, mainly by Jihadist, far-left, far-right and nationalist- separatist terrorist groups, as well as  provides an overview on the EU’s main counter-terrorism measures as part of its strategy to combat external and internal threats.

A high number of terrorist attacks inspired by jihadist groups like Al Qaeda and the Islamic State were carried out in Europe since the 1990s. Here, the concept of jihadi terrorism was initially underestimated since events as influential as the 9/11 attacks were considered a foreign threat, or something that was unlikely to happen on European ground. However, the 2004 and 2005 bombing attacks in Madrid and London, made Europeans aware of the of the Jihadi presence. According to Zawahiri, the leader of Al-Qaeda since 2011, fighting this war against the West was necessary to avenge the Muslim community and stop the occidental forces from fighting Islam (Kagan, F. W et al., 2016). The attacks are usually committed by lone actors and groups, aiming to cause as many casualties as possible. Even if single-actor attacks are less likely to be detected by security services and more likely to succeed, group terrorist acts are more likely to bring about more casualties. As an example, the November 2015 Paris attack, and the one which targeted Brussels in March 2016, were carried out by rather large groups, causing the death of 130 and 32 people respectively (Nesser et al., 2016).

A big part of the recruiting and indoctrination processes preceding the attacks take place online, through social media, facilitating the draft of the aforementioned lone actors (Nesser et al., 2016). Despite what one could initially imagine, bombs were not the most used weapon to carry out recent attacks. Instead, nowadays, typical weaponry would consist of homemade explosives, knives, and vehicles. Moreover, there seems to be a preference over random crowds of people instead of specific targets, allowing the attackers to maximize casualties (Nesser et al., 2016).

As mentioned before, left-wing and anarchism-related terrorist acts account for the highest number of attacks in Europe in 2020. Europol defines left-wing terrorist groups as “groups seeking to trigger violent revolution against the political, social and economic system of a state, to introduce socialism and eventually establish a communist and a classless society, being their ideology is often Marxist-Leninist”(Europol, 2021, p.94). Anarchist terrorism is a term “used to describe violent acts committed by groups or, to a lesser extent, individuals, promoting the absence of authority as a societal model (Europol, 2021, p.94). They pursue a revolutionary, anti-capitalist, anti-authoritarian agenda” (Europol, 2021, p.94). In Europe, left-wing and anarchist terrorist organizations have had a strong presence mainly in Italy, France, Spain, Greece, and Germany. Such organizations are the Informal Anarchist Federation in Italy and the Conspiracy of Fire Nuclei in Greece. Although traditionally these groups deal with anti-fascism, anti-racism, and state repression ideas, they have also added to their agenda topics such as environmental issues, distrust towards technological and scientific developments, and COVID-19 restriction measures (Europol, 2021). Like Jihadi attacks, this type of terrorism also uses social media to communicate, recruit and claim responsibility for their acts. However, left-wing and anarchist terrorist groups, unlike Jihadi terrorists, are unstructured and act against specific and symbolic targets like office buildings, companies, banks, and high-ranking people like politicians and businessmen.

According to an Europol Report, “right-wing terrorism seeks to change the entire political, social and economic system to a right-wing extremist model” (Europol, 2021, p.80). This type of terrorism fights against minorities and diverse social groups, such as immigrants, Muslims, and the LGBTQ+ community. Indeed, following the 2015 refugee crisis, there has been an increase in xenophobic and anti-immigration movements all over Europe. This could likely explain why deadly far-right attacks rose from one in 2015 to ten in 2016, in Sweden, Germany, the UK, and Spain (Bjørgo and Ravndal, 2019). Examples of these ethno-driven attacks are the Hanau shootings on 19 February 2020 by a far-right extremist causing the death of nine people (Oltermann and Connolly, 2020), and the Halle synagogue shooting on 9 October 2019. There, even though the far-right attacker failed to enter the synagogue, he later turned to local targets, killing two people (BBC, 2020). Far-right extremists also have a strong presence on the Internet, using social media platforms to hold meetings, radicalize target crowds, publish manifestos, pre-announce attacks, and even live-stream them or upload their videos afterward. An example of this would be the Halle terrorist, who recorded the attack from a camera strapped to his helmet and posted his manifesto online just before the onslaught, stating that he chose to attack Jews, instead of Muslims, as “they posed a greater threat” (Schuetze & Eddy, 2019). Like in other instances of terrorism, far-right terrorist acts also come mainly from lone wolves, who set a “role model” for other aspiring attackers. During his trial, the Halle attacker said that Brenton Tarrant, the far-right terrorist responsible for the death of 51 Muslims in 2019 in Christchurch, New Zealand (BBC, 2020), inspired him, while Tarrant himself, was said to be inspired by Andres Behring Breivik (Bjørgo and Ravndal, 2019). The latter committed two attacks in Norway in 2011 killing 77 people (Bjørgo and Ravndal, 2019).

In 2020, France and Spain reported a total of 14 ethno-nationalist and separatist terrorist attacks, while 39 individuals were arrested in seven EU member states due to suspicion of involvement in such activities (Europol, 2021). Nationalist groups seek to gain autonomy or separate themselves from an existing state, establishing independent and sovereign states. Thus, their actions focus mainly on the areas that they seek to ‘liberate’. Such nationalist groups in Europe were ETA (Euskadi Ta Askatasuna) in Spain and IRA (Irish Republican Army) in the UK and Ireland. They act in groups and choose targets related to their ideological aim, which are mainly political and governmental figures. For example, in 1973 Luis Carrero Blanco, Franco’s successor was assassinated by ETA in a bomb attack. In 1995, the organization attempted to assassinate the leader of the opposition Populist Party with a car bomb. Despite ETA announcing its dissolution and disarmament in 2018 and despite being inactive since 2009, different types of weapons and explosives linked to the group were found in France in 2020, while 12 people were arrested for separatist terrorism, four of which are related to the organization (Europol, 2021).

The EU’s role in combating the threat

Since 9/11, and especially after the 2004 and 2005 attacks on European ground, fighting terrorism has been one of the EU’s top priorities. Even though security is mainly a responsibility of the European member states, collective effort and action are required to push back this threat successfully. In response to the 9/11 attacks, the EU established a list of individuals, groups, and entities actively involved in terrorism within and outside the EU (Common Position 2001/931/CFSP). According to this terrorist list, both external and internal suspects are subject to the freezing of funds and financial assets. At the same time, external terrorists are also subject to measures related to police and judicial cooperation. In 2005, a Counter-Terrorism Strategy was adopted, according to which EU’s strategy would focus on prevention, protection, pursuit, and response (14469/4/05 REV 4); while in 2004, a coordinator was appointed to monitor the implementation of this strategy (European Council, 7906/04). Furthermore, in an effort to prevent radicalization, the EU launched in 2011 the Radicalization Awareness Network (RAN), consisting of 6000 practitioners engaged in preventing and countering violent extremism.

In April 2021, the EU adopted a regulation to prevent the dissemination of terrorist content online by allowing competent authorities of the Member States to require hosting service providers to remove terrorist content (Regulation 2021/784). In terms of exchanging data information, a Directive was adopted in 2016 on passenger name record (PNR) data during flights as a countermeasure to the foreign fighters phenomenon (Directive 2016/681). Lastly, combating the financing of terrorism has been one of the EU’s top priorities. EU’s efforts on cutting terrorist financing include additional legal measures with non-EU countries lacking an efficient anti-money laundering prevention system (Directive 2015/849) and the fifth anti-money laundry directive adopted in 2018 aiming to improve transparency, the cooperation between financial intelligence units, and transaction checks on high-risk third countries (Directive 2018/843).

Terrorism’s multidimensional and volatile face represents a constant, persistent, and critical threat. Nowadays, all types of terrorism have a strong presence and activity on social media, where they organize attacks and recruit members, especially among younger audiences. The attacks are also seemingly getting more and more simplified. Attackers use easily accessible weapons and target crowded locations to take away as many lives as possible. Terrorism’s ever-changing nature makes it necessary to act collectively and swiftly; however, more emphasis should be given to preventing this phenomenon. The EU organizations and its member states work closely to, if not completely eradicate the threat, to minimize it as much as possible, focusing on the prevention of terrorist’s online presence, data exchange between members of the aforementioned groups, and the financing of terrorism itself. The EU needs to encourage its member states to improve their internal ability to respond effectively to terrorist attacks, but it is also crucial to work closely and strengthen the cooperation with other extra-EU countries, so as to tackle a global-wide phenomenone most efficient way.