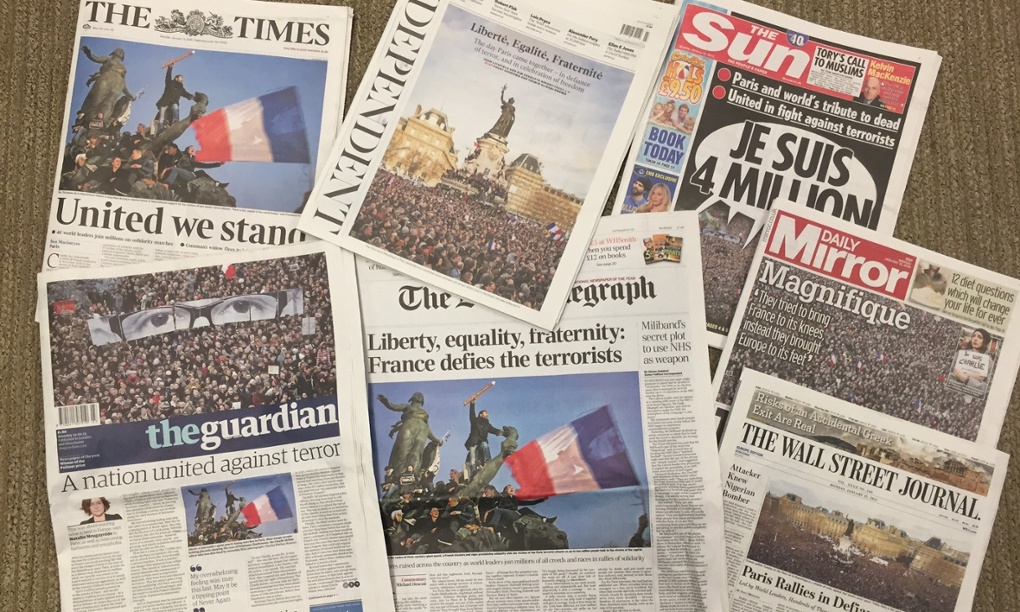 Almost four months have passed since the horrific terrorist attack on the French satirical magazine Charlie Hebdo in Paris. The incidents triggered an avalanche of different (sometimes highly emotional) accounts in the digital public sphere offering a wide range of perspectives and opinions on the topic (e.g. Markha Valenta1 or Teju Cole2). The global and especially European sympathy was overwhelming: hundreds of thousands of people went on the streets to show their sympathy, Facebook and Twitter users changed their profile pictures to the French flag or “je suis Charlie”, the hashtag #jesuischarlie was trending for weeks and political leaders joined in Paris for a somewhat controversial “solidarity march”. Rather than adding another opinion-based blog post to the mix, we want to discuss the implications of the Charlie Hebdo attacks on European identity on a data-based foundation. For that, we conducted a short online survey in the weeks following the events in Paris.

Before we present the key results of our empirical study, let us first take a look at the different theoretical arguments for possible effects of the Charlie Hebdo attacks on European identity. In a second step we introduce some descriptive as well as explanative results of our study. Subsequently we conclude by discussing the implications of our findings.

The relationship between the public sphere and collective identity

The events in Paris undeniably reached global awareness whether in news media, social media or personal communication. Social science literature provides a wide range of theoretical arguments on how the public sphere can impact people’s collective (in this case European) identity. First, we need to address the question if there is such a thing as a European public sphere. The word public sphere might still activate associations with actual public places in which people debate important political and social issues (e.g. a market place, central square or Agora). Yet nowadays, the term public sphere mainly refers to mediated public communication via mass media channels. With regard to Europe, the existence of a transnational public sphere is highly debated due to (1) the multitude of different media systems, (2) the lack of European media and (3) the abundance of different languages in Europe (Kielmansegg 2003). However scholars point out that national public spheres become increasingly europeanized (both on a vertical and horizontal level3) and that this development contributes to forming a European identity (Kaina 2012).

Soffer (2013: 51) argues that the simultaneous consumption of similar media content “contributes to, or even creates, an imagined community”. An event of this magnitude reaches almost everybody across borders and people expect each other to have at least basic knowledge about the topic no matter whether they live in Portugal, Greece, Ireland or Estonia.

Another way for the news media to foster European identity is to highlight cultural, economic and political similarities and to focus on the common historical European heritage. A brief glance at the international press review for this particular time period shows that indeed many media outlets claimed that “European values and norms such as press freedom and freedom of opinion are under attack”:

This brings us to the next arguments supported by many scholars across different disciplines: the integrating effect of having a common enemy. The French philosopher Jacques Derrida describes this phenomenon as “otherness”. With regard to Europe the concept of this “constitutive other” has mainly been interpreted in terms of nation states (e.g. USA, Russia or China), but in light of the Charlie Hebdo incidents and the shockingly popular islamophobic PEGIDA movement (patriotic Europeans against the Islamization of the Western world) in Dresden (Germany) it might be time to reconsider this thesis. It seems that the whole religion of Islam is more and more considered to be the “other”. But what does this assumption mean for European identity? Does European identity necessarily come at the cost of increased islamophobia in Europe? Should we reconsider the desirability of European identity? How can we foster European identity without creating islamophobic resentments?

What does the data say?

In order to shed some light on these questions, we conducted a short online survey in the two weeks following the attacks in Paris. In total, 219 respondents from 19 European countries recruited through online social media platforms took part. Our study was explorative in nature and thus makes no claim to being representative for the population of Europe, but still offers some interesting insights. Our sample was quite young (M=28.7 years), highly educated, predominantly Christian (45.6%) or unaffiliated with any religion (37%) and placed itself rather “left” on the political spectrum (M=32.5, on a 100 point scale ranging from 1 = extremely left to 100 = extremely right). Respondents were asked about their political actions with regard to the Charlie Hebdo incidents and their general European identity and islamophobia.

First, we looked at some descriptive empirical findings with regard to political action. We asked participants whether they engaged in some form of political action in response to the Charlie Hebdo attacks. Three out of four respondents (75.0 %) indicated to have done so. The most popular activities included sharing (31%) or liking (42%) political information via Social Media or showing sympathy by posting #jesuischarlie (16%) on social networking sites. All those actions, however, do not require a lot of effort. Activities that require more personal resources were less common, but also carry more political weight: 13 percent of the respondents attended a demonstration, 8 percent signed a petition, 9 percent mobilized others to engage in political actions and 11 percent bought or subscribed to a satirical magazine.

And what about these demographics as predictors? Are older people more Islamophobic than the younger ones? And do we find the expected effect for political orientation – i.e. more right-wing political ideology being related to Islamophobia? Here our data says yes. We did indeed find that both age (beta= -0.199, p=.003) and political orientation (beta= -0.444, p=.000) significantly impact islamophobia. The older and the more politically “right-wing” respondents are, the more negative are their attitudes towards Muslims.

First, the outcry after the Charlie Hebdo attacks was immense. People all across Europe saw the same images which led them to participate in this media firestorm. They shared stories, changed their Facebook profile pictures and tweeted hashtags of “solidarity” – in line with this impression we find high levels of such activism in our sample. Yet, when it came to the more strenuous types of activism our sample showed an old and well-known pattern: only a small part engage in this kind of high cost activism. Now people might argue that our generation (remember our sample was relatively young) is politically alienated but since sharing content etc. is a form of political activism this criticism is not justified. What our results show is that our generation is very politically active when it comes to low cost activism (Gladwell 2010) yet less willing to engage in classical political activism like demonstrations. Whether this might be a sign of resignation – they might think that this form of activism is outdated and ineffective – or laziness – they might feel like going on the streets is too much of a hassle – is an interesting point for discussion (Let us know what you think in the comments below).

Second, our data supported some of the commonly held beliefs about the correlates of Islamophobia. Older respondents and those that identify themselves with being more right-wing in their political ideology show higher levels of Islamophobia. What is it that drives these effects? Indeed the fear of the constructed other, the unknown? Our data does not allow to draw final conclusions on these questions but we hope to spur fruitful debate about this. As a positive note we show that European identity is not automatically linked to Islamophobia. People in our sample who identified with the supra-national identity were not more islamophobic.