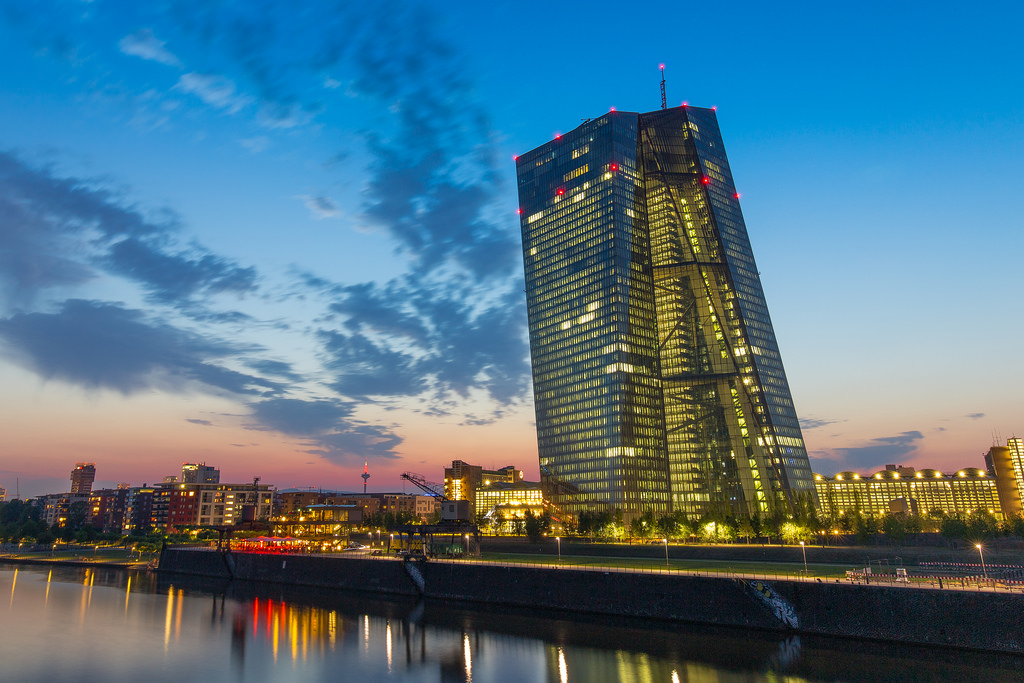 On 13th December 2017, the US Federal Reserve Bank raised interest rates by 0.25%, the third rate rise in 2017  and the fifth raise since the financial crisis[1]. The European Central Bank (ECB) on the other hand announced its monetary policy for the upcoming months not long ago, on 26th October 2017[2]. In this decision, the ECB decided to keep the central interest rate at 0.00% and to reduce only the monthly volume of bonds purchases. But the pressure leveled on the ECB is mounting. Will it follow the examples of the Fed soon?

Prior to the decision, JPMorgan Asset Management had made a Forecast assumption for the ECB to keep purchases at EUR 60bn per month from Oct 2017 to Dec 2017 and then reduce monthly purchases to EUR 40bn in Jan 2018, then to EUR 20bn in July 2018 and to zero asset purchases at the end of 2018[3].

This prediction came very close: the ECB decided to reduce the buys to €30 billion ($35 billion) per month from January 2018 on[4]. The central bank indicated that the purchases would continue at that pace deep into 2018 until at least September – but longer if needed[5]. Moreover, ECB President Mario Draghi refused to announce an end date for the crisis measures yet[6]; it is believed that this refusal is of strategic nature in order not to seeing the euro appreciate or bond yields increase[7].

Launched in March 2015, the ECB has been purchasing government bonds worth €60 billion ($71 billion) and other assets each month[8]. At times, the purchases reached €80 billion ($94 billion) per month[9].

If we put the ECB’s decision in a broader context and look at how the ECB acted in the course of the financial crisis peaking in 2008 and the following period of cheap money for EU Member States, we can observe that in 2017 assets on the ECB balance sheet reached an all-time high of more than €4 trillion. This result is very similar to the result in the US, where the Federal Reserve purchased assets worth $4.5 trillion over the years[10].

Earlier this year, when speculations about who is going to succeed ECB President Mario Draghi arose, German Bundesbank head Jens Weidmann strongly criticised the ECB’s reluctance to quickly phase out its bond-buying programm[11]. The two central bankers already had different stances on the ECB’s OMT programme that was suggested to be implemented in the course the discussions on the government debts of several Member States of the Eurozone.

Looking at the G4 central bank (i.e. European Central Bank, US Federal Reserve, Bank of England and Bank of Japan) asset purchases from 2009 until today, we can observe that asset purchases peaked again in 2017 and almost reached the all-time high of 2009[12]. As the situation on financial markets worldwide is currently improving, JP Morgan Asset Management has forecasted a further decrease until 2020[13].

Predicting the future regarding key interest rates, we can expect that the ECB will be one of the last central banks in the western hemisphere to raise interest rates again since the worldwide financial crisis. It is believed that an increase of key interest rates will not happen before the end of 2018[14], but rather a further decrease in asset purchases can be expected first in order to enable a smooth transition in monetary policy.

Actually, according to the so-called Taylor Rule, the interest rates in the US should be even higher than those currently in place. The Taylor Rule, first proposed by economics professor John B. Taylor, is a formula-based approach for determining the ideal interest rate to be enacted by the Fed. It is based on the deviation between inflation, inflation target and economic output. Although John Taylor had been shortlisted, Jerome Powell and not John Taylor was nominated to serve as the next Chairman of the Federal Reserve as successor to the incumbent  Janet Yellen, whose term ends on February 3, 2018. Therefore, a stronger adherence to the Taylor Rule cannot be expected in the future, with the result that key interest rates will probably not get as high as they could otherwise. Nevertheless: at the Senate confirmation hearing, Powell reiterated the intention of the Fed to increase key interest rates[18]. And at least in the statement given on 13th December, three further rate raises were flagged for each of 2018 and 2019[19]. He also voiced his support for reducing the Fed’s $4.5 trillion balance sheet and said that as a result of moving away from asset purchases, it would eventually settle between $2.5 to $3 trillion[20].

Regarding the ECB, we can expect that it will follow the examples of the Fed sooner or later. The longer the ECB stays one of the exceptions in terms of key interest rates and asset purchases, the more pressure it will face. Another instance underpinning this development is the Swiss National Bank (SNB). According to the head of the department Global Investment Themes at the Swiss bank UBS, Philippe Müller, the SNB could go a first step towards a raise of key interest rates in late 2018[21]. Additionally, it was reported in the end of November this year that the South-Korean central bank raised its key interest rate to 1.50% from a record low of 1.25%[22].

All those instances show changing winds in the worldwide financial markets: interest rates are increasing and asset purchases are decreasing. The ECB will have to follow; otherwise, it will face massive problems of justification.

Jan Fleischmann is the 2017-18 EST Ambassador to Germany.