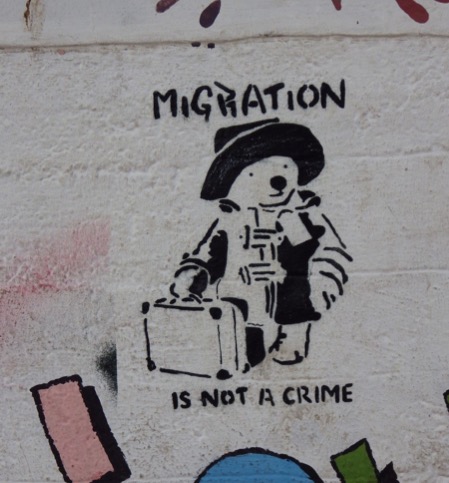 “Waves of refugees” – what sounds like an innocent metaphor demonstrates a naturalized portrayal of the millions of people who have fled their homes in search for safety; namely that of a security and economic threat comparable to a natural catastrophe (Abid, Manan, & Rahman, 2017). Not only do narratives like these “shift blame from historical, political-economic structures to the displaced people themselves” (Holmes & Castañeda, 2016), but the continuous ‘us-versus-them’ mentality is also dehumanizing. It is therefore not much of a surprise that an already difficult challenge like facilitating integration (without assimilation) is currently facing a true trial in Europe. While politicians on the national and EU-level have yet to provide an adequate and humane response to the ongoing humanitarian crisis, locals and refugees have started to use a new medium to exchange stories and bridge existing language barriers: art. While many think of art as a luxury – which it often is – art can also be a medium for the masses to transcend boundaries such as those drawn by language or culture. It can range from being a form of demonstration or political commentary to an expression of emotions or the sharing of stories; and anything in between. In this article, I present three examples of refugees and locals who use art to communicate their thoughts on migration.

The first art piece I would like to share is a charcoal drawing by a Libyan teenager entitled “Inshallah” (original: إنشالله). It shows the time when the boy fled the war in his country in an overcrowded pick-up truck. A young boy fell out of the truck but the driver kept going in order to safe the rest on board (BBC, 2017). The title “Inshallah” translates to “if God wills” and refers to both the words of the driver when the child fell off the vehicle as well as an important phrase of hope for the young artist on his way to Europe. This picture is a prime example of how a teenager’s own personal journey can be understood universally thanks to a sheet of paper and a few strokes of charcoal.

Another example of a teenager who shared her own journey through art is Amineh Abou Kerech.

After learning to speak English for only one year, the thirteen-year-old managed to win the British Betjeman Poetry Prize of 2017 with her poem called “Lament for Syria” (Fox, 2017). Initially, the poem was written half in English and half in Arabic before Amineh translated it using only a dictionary and the help of her teacher and her sister (Fox, 2017). It is truly amazing and inspiring to see how this thirteen-year-old has mastered the art of poetry so intuitively, driven by her passion and the wish to share her personal story.

Oh Syria, my love
I hear your moaning
in the cries of the doves.
I hear your screaming cry.
I left your land and merciful soil
And your fragrance of jasmine
My wing is broken like your wing.

I am from Syria
From a land where people pick up a discarded piece of bread
So that it does not get trampled on
From a place where a mother teaches her son not to step on an ant at the end of the day.
From a place where a teenager hides his cigarette from his old brother out of respect.
From a place where old ladies would water jasmine trees at dawn.
From the neighbours’ coffee in the morning
From: after you, aunt; as you wish, uncle; with pleasure, sister…
From a place which endured, which waited, which is still waiting for relief.

Syria.
I will not write poetry for anyone else.

Can anyone teach me
how to make a homeland?
Heartfelt thanks if you can,
heartiest thanks,
from the house-sparrows,
the apple-trees of Syria,
and yours very sincerely.

A third intimate depiction of one’s experience as a refugee can be found in the portraiture “Blue” by the Parmis Vard. The Iranian artist fled three years ago from her home in Iran to Europe for political reasons (MOAS, n.d.). Since then her art has been featured in many exhibitions concerning migration and women. Here is how Parmis describes the meaning behind her pastel portraiture in her own words:

Once I saw a photo that reminded me of myself, so I just thought I would paint a face like my own, and for me blue is the colour of peace and calm. Darker blue shows inner turmoil; my dreams, my soul are blue. And [in this piece] I just want to say to another person ‘just give me peace instead’. I think this painting represents me and all of the people who are looking for peace, and with this painting I wanted to tell the world ‘listen to the silence of the human: don’t become this colour blue that is darkness.

Her message of peace is not only reflected in the words Parmis uses to explain her painting; it is also mirrored in the way the woman in it peacefully closes her eyes with her mouth left open ever so slightly as though she was trying to let go of all negative experiences in her life. As such, with and without the artist’s words Parmis has created a dazzling portrayal of both her personal experience as a refugee searching for safety as well as a universal message of peace.

But migrants are not the only ones who have started to use art as a way to communicate their thoughts in connection to refugees and migration. Take for instance the photograph of a train in Germany with the graffiti “أهلاً وسهلاً”, the Arabic phrase for “Welcome”, on it. While this would be a kind gesture in any part of Germany towards refugees, what makes it almost iconic is the fact that the city in question is Dresden (Tulke, 2015). In 2014, Dresden became the birthplace of PEGIDA, short for ‘Patriotic Europeans Against the Islamisation of the West’, which is an openly xenophobic and racist political movement and organization (Focus, 2016). In this context, this red train with its welcoming message is a way for locals against PEGIDA to show their solidarity with refugees in Dresden.

In a similar vain, Bern O’Donoghue has made it his task to counter the dehumanizing narrative and misinformation about refugees and migrants by the “unethical position the UK government has taken on the refugee crisis” (Stevens, 2015). Through his paper boat art project ‘Refugees Crossing’, the British artist asks people to put paper boats with facts about refugees in places where people congregate or travel “to remind people that refugees need and deserve our help” (Stevens, 2015). Through simple paper boats individuals in the UK but also in Hungary, Spain and the US seek to raise awareness and solidarity for migrants and refugees.

Finally, some artists have addressed EU politics on migration more directly through their work as these two photographs illustrate. On the left, the famous street artist Banksy, who is usually known for his graffities, showcases his criticism towards the lack of action by the EU in the Mediterranean with this art work, in which yellow floating bodies form the European flag (Tulke, 2015). The picture does not need a caption to explain the message it conveys. Similarly, the Italian street artist Blu has created “The Walls of Shame”, impressive paintings in Morocco and Spain which can seen on the right (rebloggy.com, n.d.). The painting also features the European flag, this time as barbed wire keeping out people in need.

Migration to and from the European continent is not a new phenomenon; in fact, it is an integral part of Europe’s history and a pillar without which the EU as we know it today would not exist. With “85% of the world’s refugees [being] hosted by developing regions” (European Parliament, 2017), it is an embarrassment how one of the richest continents, one that owes its success to these regions, one that has done whatever it takes to overcome economic crises has failed to solve this ongoing humanitarian disaster. But, as we all know, after difficulty comes ease and so the works of the artists I introduced – as well as of countless others – all ease the difficulty of integration in their own way. They may not speak the same language but together, refugees, migrants and locals have used art to bridge their barriers, share personal stories or political views, and spread messages of peace and hope for a brighter future.

By Cindy Langer, Editor in Chief of the European Student Think Tank – EST Board of 2017-18 and co-founder of the EUrArt Working Group.