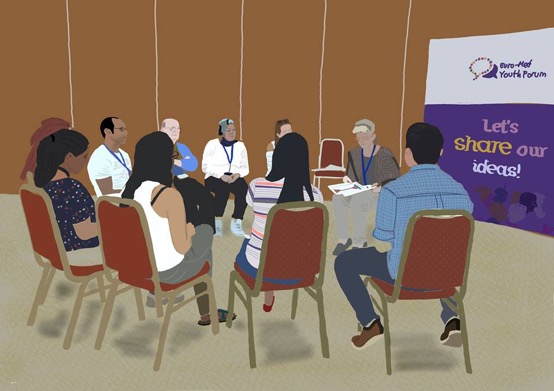 A very special gathering took place between the 18th and the 22nd of  April 2018 in Larnaca, Cyprus. The Euro-Med Youth Forum with the title “Sustainable Participation and Active Citizenship” really lived up to its expectations. 120 delegates, youth workers, youth leaders, policy-makers, students and researchers from Europe and Southern Mediterranean countries were brought together in order to unite their knowledge, interests and creativity under one goal: to discover ways to render Youth an active stakeholder in all the aspects of social life. The Forum was implemented in the framework of the “Erasmus+” programme by the National Agency of Cyprus, in collaboration with the National Agencies of Italy, Portugal and Greece, SALTO EuroMed and Good Practices, Larnaca Municipality, Europe Direct Larnaca and the European Parliament Information Office in Cyprus.

Apart from strengthening youth participation, the Forum aimed to foster the concepts of citizenship and democracy, to create bridges between young people coming from the Euro-Med area, and to motivate the participants to take action locally, utilizing good practices that will be communicated between the newly created network of like-minded individuals. Half of the participants were young students from Cyprus and members of the European Parliament Ambassador School programme, who were present in one of the three days of the Forum. In this way, the experienced participants (e.g. youth workers) had the opportunity to receive useful feedback from a younger generation on how to adjust their initiatives in a way that their impact in the Youth is maximized (e.g. new technologies). The Forum’s methodology was based on the non-formal learning approach. There were, of course, speeches and group or panel discussions on a set topic, but there was also plenty of space for collective learning,  sharing of tools, experiences, resources and capacity building for future actions. The participants originated from the following countries: Greece, Cyprus, Spain, Germany, Bulgaria, Lebanon, Italy, Portugal, Egypt, Tunisia, Palestine*, Austria, Morocco, Norway, Jordan, France, which lead to a harmonious and fruitful international cooperation.

The first day begun with the facilitators stating their intentions and the desirable outcome of the Forum. In addition, they introduced the definition of youth participation, asking the bystanders to formulate solid ideas on how to involve more young people to building a better society. They also stated clearly that all the efforts carried out during the Forum were devoted – and must be channeled – to the individuals that were not present. After the opening it was time for the first keynote speaker; a representative of Family Planning Association elaborated on their work on promoting sex education and the respect for the difference among youngsters. Furthermore, the participants were informed about how to motivate young people to be part of an organization and fight for a common goal. Having a well-defined strategy is the key to success, since people would put their trust easier into projects that consist of clear steps towards a realistic and well-explained goal. The activities of the first day ended with sharing workshops that were facilitated by some participating youth workers,  who communicated their good practices regarding the youth participation, and actively engaged the rest of the participants in the process.

The second day started with a heated debate among all the aforementioned stakeholders. It was a unique opportunity to see the dynamics and the interests of each group co-existing and sometimes clashing with one another. Everyone was particularly impressed and moved by the passionate speeches of high-school students expressing their concerns about their future. Additionally, the discussion circled around the importance of education and personal contribution to the societal change. Finally, in the afternoon, the participants were welcomed at the premises of “Home for Cooperation”, located in the buffer zone of Nicosia – a space full of creativity and NGOs that aim to create bridges between the two major ethnic groups of the island via cultural, educational and artistic projects –, so that they were informed about the achieved progress and future actions.

The third and final day of the Forum started with two speakers with several years of experience working with youth. The first session utilized the information given during the previous days and focused on the further deconstruction of the youth participation. For instance, there was an effort to specify the age group around the world in which one person is considered young. Moreover, the speaker dived into the emotional gains of being active in the society,  which could act as drivers for further escalation of personal involvement, bringing as an example the voluntary actions. The second keynote speaker of the day brought up the issue of the democratic crisis that many countries around the world face. The term “democratur” was introduced, describing the case of autocratic regimes that are hidden behind a veil of democracy. The above phenomenon was analyzed under the scope of the volume of youth participation, exploring the connection between active citizenship and the political situation of a country. The final session of the day included intensive networking between the participating youth workers, who explored the possibility of creating new alliances that could bring them closer to their desired goals, which aligned with the increase in youth participation.

Overall, the Euro-Med Youth Forum was a well-organized and successful gathering with highly skilled participants. The real impact of the Forum is expected to be seen in the following years, based on the grassroot initiatives that will be created in the communities that the participants are coming from. The hope of continuing the efforts and the possibility of recurrence of the Forum filled both the participants and the organizers with motivation to create a real impact and bring closer the countries of the Euro-Med area.

*not recognized by all UN members.