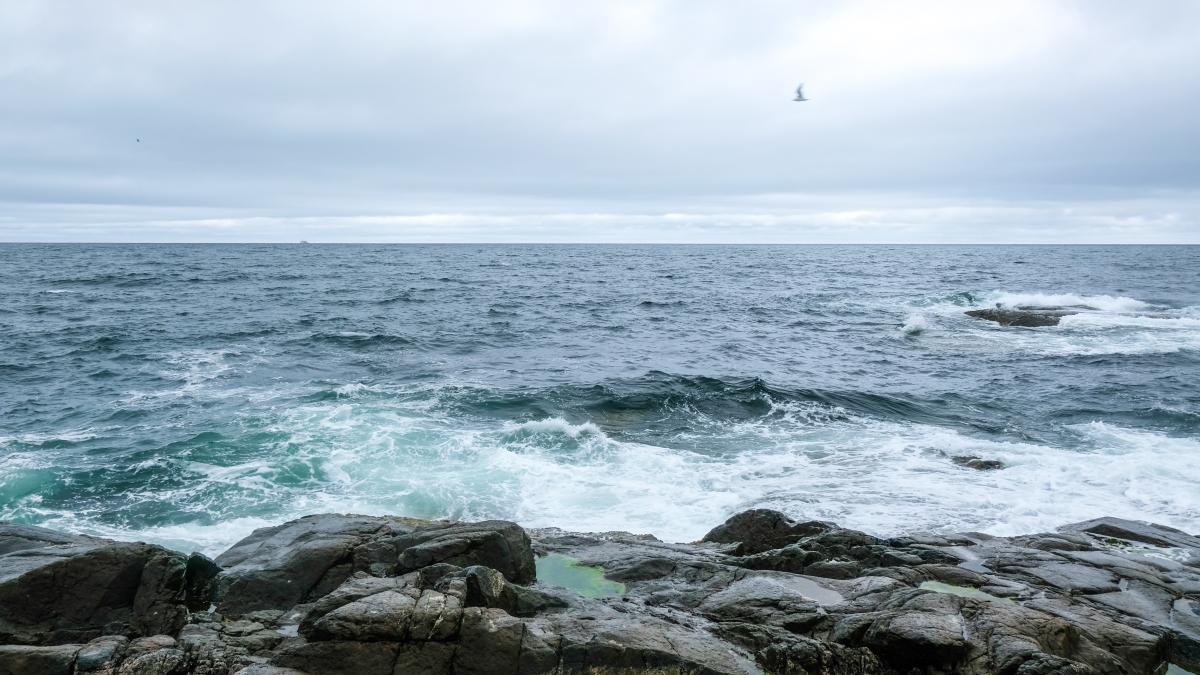 Climate change has created a renewed threat to global security (Galgano, 2019; Koubi, 2019). In particular, it has significant influence over the proximate factors that instigate friction and violence. Food insecurity, mass migration and natural disasters are commonly propagated influences on global and regional instability resulting from climate change (US Army War College, 2019) . However, more saliently, Arctic melting offers a very immediate threat to geopolitical instability and thus, security threats (Saran, 2019; Alvarez, 2019). This article will assess this threat and its implications for EU Security Policy. In the brave new world of the Anthropocene, governments must seriously consider the geopolitical underpinnings of anthropogenic climate change, and accordingly, the pre-emptive policies they must enact (IMCCS, 2020; TCFD, 2017).

In the last decade, the geopolitical tenor surrounding the Arctic has shifted from one of cooperation to one of animosity (IMCCS, 2020; Saran, 2019). The Arctic Council, composed of all 8 Arctic states, is a politically precarious multilateral mechanism (ICMMS, 2020). In May 2019, Michael Pompeo, US Secretary of the State, undermined the assumptions guiding the principles of the Council, by claiming climate change was an economic opportunity rather than a threat for the region, and labelling the Arctic as an arena for conflict rather than cooperation (ICMMS, 2020). Disagreements on this subject have led the Arctic Council to lose policy coherence on climate change in the region, including on the security front. While the European Arctic powers have sought to attenuate a lacklustre focus on climate change, the current geopolitical context will make policy coherence a notable challenge (ICMMS, 2020; Koubi, 2019).

The United States, China and Russia understand the Arctic to be of great geostrategic importance. The abundance of extractive and aquacultural resources, along with shipping routes, creates enormous attraction for world powers to contest (US Army War College, 2019; Scrafton, 2018). Despite this, the United States and the EU have proven somewhat averse to acknowledging the role of climate change in the security dimensions of the Arctic (IMCCS, 2020; Scrafton, 2018).

The Arctic: The Third Frontier?

Saran (2018) propagates the friction of 3 geographies as redefining features of near-future geopolitics. These three geographies are the Indo-Pacific, Eurasia and the Arctic; the geopolitical interests permeating such being the drivers of future multilateral policies and perturbations.

The Arctic poses a unique threat due to its melting. Its melting is merging the geopolitics of the Pacific and Atlantic – two major tension points in the current world order (Scrafton, 2018; Saran, 2019). An analysis of Figure 1 can demonstrate the role new trade routes might have in the distribution of economic wealth and power. This is as new trade routes, and thus geopolitical points of contestation, open up. According to the United States Army War College (2019), by 2050, opportunities for non-modified vessels to traverse the Arctic Ocean will double, and many of these journeys will avoid transit fees by directly crossing the Arctic, creating enormous opportunities for new shipping routes. 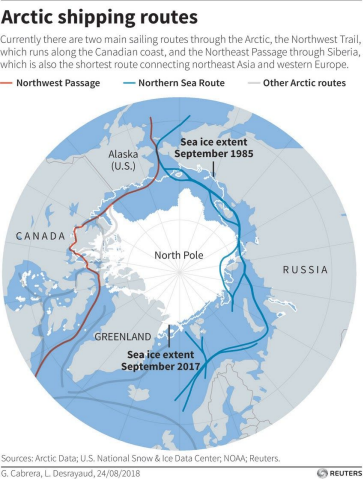 Likewise, the Arctic contains approximately 25% of the world’s undiscovered hydrocarbon reserves and more than one trillion US Dollars worth of gold, platinum and other minerals (US Army War College, 2020; ICCMS, 2020). The melting of the Arctic will reveal many of these untapped reserves, and may create the possibility for conflict over such resources, especially since China, the United States and Russia do not have a strong history of amicability (US Army War College, 2019).

Already, the Chinese and Russian governments are investing in commercial infrastructure and military capabilities in the region, taking advantage of the unprecedented levels of ice melting (Scrafton, 2018; Saran, 2019; Koubi, 2019). This includes the Polar Silk Road strategy; a complementary project to the existing Belt and Road Initiative, aiming to instill economic and social development in the Arctic (Scrafton, 2018). This will create a shipping route that will stretch from Shanghai to Hamburg, eventually using the Northernmost Arctic to avoid Canadian and Russian waterways (ICMMS, 2020).

Accordingly, the Yamal LNG Project on the Kara Sea is being developed. It is half-owned by Russia, 20% owned by the China National Petroleum Corporation, and 10% of the project is funded by China’s ‘Silk Road Fund’ (Scrafton, 2018). The increasing ease of access for LNG shipping to the region as a result of melting is making such a project possible, and is a potential cause of conflict for the future (Scrafton, 2018). This is due to its encroachment on American and Canadian shipping routes, discord over the legalities of such a project and concerns over the bolstered capacity of both nations’ militaries and economies due to increased LNG extraction (Scrafton, 2018; Saran, 2018; Galgano, 2019). China has continuously pursued an engagement in Arctic governance. This includes significant contributions to the Arctic Council and strengthening its relationship with European Arctic Nations, along with coordination mechanisms with Japan and South Korea in the region (Scrafton, 2018). In January 2018, China syndicated its first public Arctic policy. The nation declared itself to be a ‘near Arctic state’. As declared by Li Zhenfu, director of Dalian Maritime University’s Research Centre for Polar Maritime Studies stated, “[w]hoever has control over the Arctic route and will control the new passage of world economics” (ICCMS, 2020, p.29). 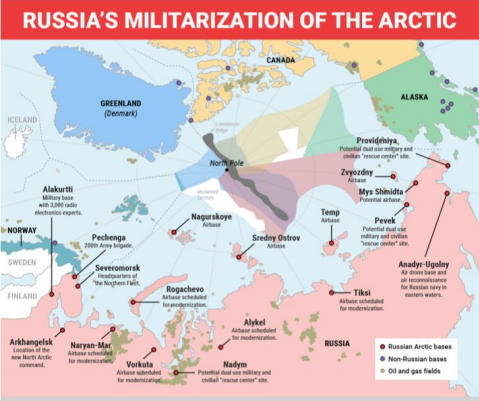 The multifaceted trepidations of the region’s geopolitical stability pertaining to climate change necessitate a reformed approach to regional politics. Some recommendations include:

The efficacy of existing multilateral arctic institutions are waning in the face of the Anthropocene. The traditional collegiality between members of various dialogues is diminishing. This is especially in the wake of discourse moving from common environmental interests to a more acrimonious discussion of trade and security matters (Koubi, 2019; Galgano, 2019). Furthermore, in the current global context, various actors not traditionally involved in certain circles are beginning to do so. For instance, the EU is engaging with the Indian Ocean Rim Association and ASEAN is engaging with the Arctic Council (Scrafton, 2018). This is in the pursuit of new commercial and political interests, and may further the risk of geopolitical tensions and conflict (Scrafton, 2018).

Perhaps collaborative institutions between powers centred around Arctic climate and security risk could catalyse stronger diplomatic outcomes. Additionally, existing institutions, such as NATO, OSCE, the UNSC and even the Arctic Circle could redefine objectives and understandings to better address the emerging security risks present in the Arctic. Likewise, multilateral environmental organisations and political arms could better integrate the environment-security nexus into their objectives, nullifying the silos these matters often find themselves in (see Galgano, 2019; Koubi, 2019).

Risk managers must reconsider the threat posed to their activities and stakeholders in the Arctic. Alvarez et. al (2019) calls on both public and private sector risk managers to do so, both in regards to climate change, security threats, and the nexus between these forces. Figure 3 displays a framework through which these risks can be considered. This is for the sake of fiduciary obligations and managing risks such as credit risk, liquidity risk, political risk, climate risk and operational risk.

Actions firms and governments might want to take to mitigate risks include: 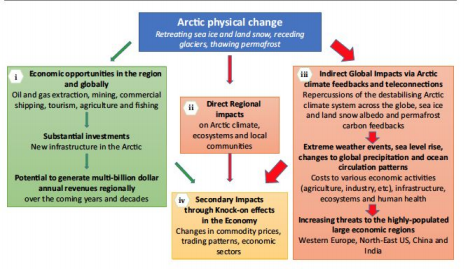