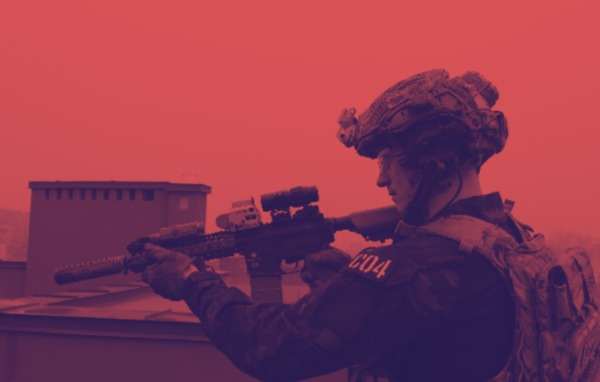 The peculiarity that outlines the special operations forces in connection with other conventional military units is determined by their adaptability to collective actions and to asymmetric warfare. Without overestimating their expertise and features, special operations forces are a cornerstone of global security, through which states manage to control critical circumstances. If an event is threatening the security of the international system, special operations forces not only ensure endurance and direct action, but are the primary apparatus by which states restrain the proliferation of this quandary and the main means by which the event can be ended. What essentially distinguishes special forces is their versatility in the international context of the growing emphasis on the so-called “grey areas” characterised by vagueness, confusion, and irregular, tangled, and hybrid threats (Mattelaer, 2016). According to John F. Kennedy, “Special Forces are the forces which are too unconventional to be called conventional, forces which are growing in number and importance and significance (Kennedy, 1962)”.

Special Units are a multipurpose apparatus that states employ against terrorism and to instruct their partners from abroad on improving their combat capabilities and their competence to withstand attacks. Special Operations Forces are a complementary element to conventional military forces and demand an inborn readiness to bear the risks, but their duty is unquestionably a tactical means that brings honour to a state’s global clout. Not much is heard about this elite component of a country’s army, and this is due to its mission and responsibilities. Special Operations Forces must be understood beyond appearances, they must be perceived as culturally different from what conventional military forces entail (Mattelaer, 2016). As the international system evolves, as the balance of power changes, and as war scenarios become hybrid and asymmetrical, Special Forces continue to play an increasingly pivotal role. The high standards and expectations that the status of Special Forces Operator entails prove that those elected to this military wing are qualified and experienced to be confronted with numerous challenges that may arise and any shift that the security environment may bring (Mattelaer, 2016).

After the post-Cold War period, the threats and enemies of NATO and its member states multiplied, and their power of action diversified and intensified. Currently, the NATO alliance, especially through the NATO member states that are in the Eastern part of Europe, are exposed to permanent threats in terms of collective security, but also the individual security of those countries. States such as Romania or the Baltic republics are considered to be buffer zones in the event of a possible conflict with Russia, and, given that the European Union does not have its own army to deal with a possible attack, the responsibility lies with another confidant, NATO forces. The security dilemma is becoming more and more obvious, as Russia is resorting to different kinds of asymmetrical challenges that endanger the security of the world system (Vesterbye & Fawn, 2017).

In our contemporary geopolitical context, the special forces of the US and its allies follow top-level training, but their opponents, that is the Russian special forces, are as vigorous and as highly trained as they are. Russia manifests its military power through its Spetsnaz branches, which represent the Russian army’s special operations units, and now the GRU, which is the Russian military intelligence service, is the strongest branch of Spetsnaz. Spetsnaz is the elite unit of the Russian army, consisting of highly qualified soldiers, often carrying out irregular operations not only during the war but also in peacetime (Suvorov, 1987). There is not much information about this special unit, only that the number of its members is almost 18,000, and the training of those recruited in this elite unit and the skills developed after to make them comparable to the special forces, such as Special Air Service (SAS) of the United Kingdom, Navy SEALs of The United States or the Shayetet 13 of Israel (Giles & Seaboyer, 2019). Russian special forces are regarded as a fusion of American and British special forces, due to the complexity of the missions they manage to accomplish. In addition to the classic combat role, they are mainly trained to fight in a cyber environment, namely collecting information from the enemy, conducting long-standing spying and reconnaissance tasks. The last few years have been extremely important for the development and adaptation of special forces to the challenges and the advantages of cyber warfare, which Russian forces manage to exploit for their own benefit, based on speed, adaptability, and continuity (Smith, 2018).

The readiness of Special Forces for asymmetrical threats and warfare

As it relates to the 2014 conflict in eastern Ukraine, the Russians have denied direct involvement in the events that hit that area, nor the support they offer to the rebellion movements in Donetsk and Lugansk. Nevertheless, those behind the operations in those areas proved to be the Russian Spetsnaz, who handled the actions clandestinely, recruiting agents from the local population (United States Army Special Operations Command, 2015). The military who led the conflict in eastern Ukraine, called by the West “Little green men”, use Russian vehicles, uniforms, weapons, and ammunition. Even though they were masked, and their green uniforms were devoid of the names that are generally worn on a military uniform, the tactics and modus operandi described them as Russians (Őze, 2020). Following the invasion of Ukraine on February 23, 2022, Russia has violated Ukraine’s national and territorial sovereignty, and now the Ukrainian people are trying to survive the attacks the Russian military is waging on them. Through this invasion, Russia seeks a reunification of the “Russian people”, denying the existence of a Ukrainian people, which it considers in fact “Little Russians” (Kuzio, 2022). Before the invasion, Putin reiterated his goals in relation to this conflict. He wants Ukraine’s aspirations to join NATO and the European Union to be stopped once and for all, with promises from the United States and its allies that this state and other former Soviet states will never be accepted as members of the two alliances, so, consequently, they can reorient their external position from west to east, that is, to Moscow. At the same time, Russia is seeking the international and Ukrainian recognition of the annexation of Crimea and any other territory in Ukraine or any former Soviet state that it may choose to formally reintegrate into the Russian Federation. Given the decision to invade Ukraine in 2022 and to violate the rules of the international system, Putin’s wishes towards the international community will have almost no chance of being fulfilled (Kagan et al., 2021).

Creating a bailiwick over the former member states of the Soviet Union is one of the major and existential goals of Russia and Putin, so the leader of Kremlin attempts through these asymmetric means to limit NATO’s ability to expand and exert influence over states that would normally be under Russian influence, Putin thinks (Kagan et al., 2021). Through the 2014 Crimean conflict and following rebellion in Eastern Ukraine in the same year, Russia has shown new operation techniques that help its forces to be unperceivable. Although the Russian special forces led the military operation and were the main ones ensuring its groundwork and control, its success was guaranteed by the widespread and properly planned deployment of information, psychological warfare, coercion, blackmail, and internet disinformation. This mixture of military and non-military instruments is Russia’s primary threat globally, to which NATO operators continue to prepare and train on all fronts. NATO forces are trained to deal with any hazard that may arise from the so-called “new generation war” of Russia. Once they set out on this ideology of the “new generation war”, the Russians will not back down, since this new means helped them to mislead their enemies (Balasevicius, 2017). The transformation of ways in which conflicts are carried, from a conventional military campaign to an effort manifested both militarily and cybernetically, politically or economically, is the tactical instrument through which Russia has the courage to intimidate certain states, especially those from the former Soviet Union. Although this type of war is arranged on several levels, the essential role remains assigned to the special operations forces, but they will be involved in both military and intelligence operations, information warfare, lawfare, financial warfare, and other complex kinds of conflict. (Balasevicius, 2017).

The initial stage of this hybrid war is considered to be the non-military one, including information gathering with the intention of establishing the appropriate design to carry out the diplomatic, economic, and military objectives. Starting with the secondary stage, special forces are introduced in the scheme, whose role is related to the intimidation and misleading of the political and military leaders of the opposing states, through coordinated efforts conducted by political means, mass communication, and main ministerial and military authorities. Furthermore, the role of the tactical operators is both to frighten and buy off political and military agents, in order to persuade them to give up their obligations and to conduct undercover propaganda aimed at intensifying dissatisfaction among people (Balasevicius, 2017). From the fifth stage, the military character of the operation is embodied, in the sense that blockades are being enforced and widespread reconnaissance and destructive actions are being arranged. Subsequently, after the deployment of the military forces, it comes the junction of cyber operations with aerospace operations, the constant intimidation of the air forces, and, in case of escalating conflict, the last stage would be the use of precision-guided munition, telecommunications, on the ground, air and sea, and in the cyber environment (Balasevicius, 2017).

In recent years, the United States and its allies have trained their special forces to the fullest to meet any new type of challenge. Special forces are qualified to understand indigenous languages, to acquire cultural dimensions, and to establish relationships based on mutual confidence with the forces and troops in the places where they are sent, in order to establish cooperation. The objective of these security partnerships is to expand the skills of local forces in combat, campaign, instruction, control, assistance, safeguard, and maneuvering. Considering the aforementioned “hybrid challenges” on the international scene, special forces are required to enhance the resilience of their partners so that they will be skilled enough to withstand a foreign assault (Watts et al., 2021). The appearance of special forces and the exercises they undertake are addressed by Russia as a threat to its national sovereignty, but through their expertise in acting quickly and effectively, the purpose of these exercises is to discourage and challenge Russia’s efforts to influence its neighbours. The competence of special forces to redirect efforts quickly, to recruit local forces, to work on any type of terrain, and to adapt to any environment, no matter how unpropitious, is treated as a danger by Russian security forces who are trying to cope with this level of training that characterises the elite of NATO armies (Watts et al., 2021).

All things considered, “versatility, interoperability, responsiveness” are indisputable features of special forces that give them the advantage of being able to adapt to changes of the world system and to face major capacity challenges in addition to the challenge of enemy innovation. Special forces are guided by a unique spirit that constantly pushes them to “behave differently” in order to improve their military efficiency and to make the most out of the tools at their disposal (Recalde, 2018). The status of special forces forced them to be truly agile, through a process of rapid integration into any war environment, whether it is a conventional conflict or a hybrid war.