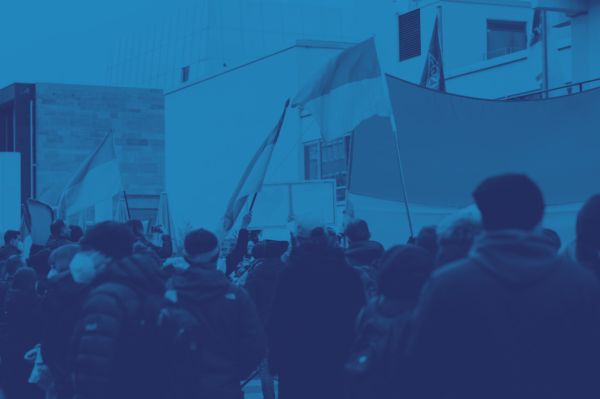 On March 15th 2022, Ambassadors to the UK (London) Niamh Axe and Diane Dupré hosted a conference on the rule of law and democratic backsliding in the EU, featuring a panel from the London School of Economics and Political Science, University College London and King’s College London. Read about the speakers’ insights and Niamh and Diane’s thoughts below.

The devastating war in Ukraine, amidst all the bloodshed, appears to have a silver lining: renewed prospects for the re-democratisation of Europe. In an event co-hosted by the EST and the UCL European Institute, Dr Heather Grabbe, Dr Michael Wilkinson, Dr Ben Jones, Professor Ronan McCrea and Dr Oliver Gerstenberg shared their insights into the legal and political dimensions of democracy in Europe, and how Russia’s invasion of Ukraine could have potentially disastrous effects for Putin’s legitimacy as a leader and international player. The “delegitimisation of Putin-esque values”, a phrase coined by Prof. McCrea, might strengthen European solidarity in the face of war, but ultimately, as Dr Wilkinson pointed out, uniting through fear risks side-lining democracy. Then again, argues Dr Jones, interpreting the EU’s alleged democratic deficit and efforts to uphold rule of law through the “fog of war” might skew the picture …

Since the fall of the Soviet Union, Russian influence in global politics, and particularly in Eastern Europe, has largely been tolerated. In fact, many prominent political figures in the West have expressed sympathy and admiration of the ‘strong man’ at the forefront of an authoritarian regime. Among them was British politician and former UKIP leader Nigel Farage hailing Putin as the world leader he admires most “as an operator, but not as a human being”, or Hungarian Prime Minister Viktor Orbán, considered the closest of Putin’s allies within Europe thanks to his considerable efforts to nurture a ‘special relationship’ with Russia (Press Association, 2014; Krekó 2022). But now, as the country invades Ukraine and wages war against an independent and democratic state, there has been an almost worldwide condemnation of President Putin’s actions, which Dr Jones argues signals the loss of the idea of admiration for authoritarianism. In somewhat of an ideological reversal, the world now looks with admiration to Ukrainian President Volodymyr Zelensky, who, calling for Ukraine’s “immediate accession via a new special procedure”, is at the forefront of a renewed pro-EU, pro-liberal agenda (Jack, 2022). Dr Jones further argued that the fall of Russia as a tolerated and even admired global power signals the end of post-Cold War Europe, with a ‘new Cold War’ emerging between liberalism and authoritarianism. Dr McCrea, on the other hand, alleges that the “delegitimisation of Putin-esque values in Europe, rebounding on Hungary and Poland”, signals that the iron curtain has moved east rather than having been destroyed. Regardless of its implications for conflict in Europe, one thing is clear: Russia will not be tolerated as it once was in international politics.

With Russia no longer being an acceptable ‘role model’ for authoritarians, outliers of democracy – such as Hungary and Poland – are faced with a choice: Putin or Europe? Dr Wilkinson, somewhat of a critic of the European integration project, admitted that a silver lining of the war in Ukraine could be increased solidarity among Europeans, a renewed sense of unity that could be used as an opportunity to bridge the democratic gap between Poland, Hungary and Western Europe. Prior to the invasion, both countries were largely aligned with “Putin-esque values”, where their “disputes with the EU involved their espousal of a worldview that overlapped significantly with that of President Putin” (McCrea, 2022). In the wake of Russia’s invasion of Ukraine, though, the political landscape has shifted. In a recent article, Dr McCrea argued that “EU membership being a key element of Polish security, Warsaw will feel pressure to be more conciliatory in its clashes with Brussels” (Ibid.). Similarly, Dr Grabbe claims that Orbán has thus far experienced the “best of both worlds” between Russia and the EU, and hence now faces a choice between these two models – an issue that will likely sway how Hungarians vote in the parliamentary elections on April 3rd (Bayer, 2022). Yet, Dr Grabbe also notes that these disputes embody the contestation of liberal values, not economic principles: Hungary, for one, does not entirely reject the EU model, exemplified by the fact that it has one of the highest levels of compliance with EU law when it comes to the single market. If the divide between budding authoritarians in Eastern Europe and the rest of the EU is characterised by liberal values, then the fall of Russia as an ideological alternative to Europe could strengthen unity in the EU at long last. The war in Ukraine could see the re-democratisation of Hungary and Poland – if not in the name of endorsing liberal values, then at least in the name of national security.

The Ukrainian war has demonstrated that the EU can act collectively in times of crisis. This is a welcome development, especially in light of the EU’s historical failures to present a united front in relation to the Yugoslav wars, the 2015 financial crisis and the Covid-19 pandemic. As NGO research coordinator Jakub Jaraczewski has remarked, “when we have an external war, we don’t need an internal one”. Poland especially has a lot to be commended for: it has welcomed a great number of Ukrainian refugees, and has led the EU’s response to the conflict as one of the states most concerned with the Russian threat (Cienski, 2022). The EU has a lot to learn from the opening up of its often marginalised central and eastern states. Yet, hope of unity must not extend too far from the specific context from which it has blossomed.

On a global level, the Ukrainian war may have even exacerbated democracy’s vulnerability. 35 states, representing almost half of the world’s population, abstained from the UN General Assembly motion condemning Russia’s invasion of Ukraine (Ferguson, 2022). These included China, India, and a significant number of African states. Whilst autocratic Hungary and Poland may have aligned with the EU’s united front, the outcome of the UN motion highlights that European unity is very much the result of the Western liberal culture, geographical proximity and historical relations. However, one must beware of analogising between the Ukrainian conflict and other sovereign threats. As the US Institute of Peace has said, “China is not Russia. Taiwan is not Ukraine”, pointing out how the Russo-Ukrainian context and Russian aggression is very much unique (Scobell & Stevenson-Yang, 2022). Yet one thing has been made clear from the GA result: there is no global “delegitimization of Putin-esque” values, even if that might be the case in Europe. The past month may have supported positive change in the EU’s backsliding states, but universally, democracy is in a much more vulnerable position than autocratic regimes.

Indeed, Dr Wilkinson warns against associating the EU’s recent actions with any real changes to the democratic credentials of the backsliding states, or the EU’s own institutions for that matter. The Polish member of the European Parliament Patryk Jaki’s demand that the Commission “immediately cease any sanctions against Poland” confuses two separate political behaviours: whilst Poland may have led the EU’s humanitarian response to Ukraine’s exodus, this has not yet altered the damaging hold that Law and Justice, Poland’s governing party, has over the country’s rule of law (Cienski, 2022). In fact, Dr Wilkinson warns, the EU’s new integration through a common defence plan will not steer backsliding states towards democratisation. First, the possible trigger of the rule of law conditionality mechanism against Poland and Hungary may exacerbate the states’ ‘us versus them’ position, leaving them without an authoritarian ideal to the east, and without a helping hand from Western EU states. This is not to say that the Commission should refrain from using this regulation: Dr Grabbe has criticised the need to defend what represents, after all, the embodiment of the EU’s checks and balances. The Ukrainian conflict should have given backsliding states enough incentive to rethink their democratic position and “embrace the EU model of independent courts” (McCrea, 2022). Second, unity through fear will in all likelihood weaken rather than strengthen democracy, both at the state and supranational level. While efficiency and unity may be reinforced, Dr Wilkinson predicts that power given to the executive will side-line the rule of law. This is not necessarily cause for distress: it is generally accepted amongst academics that the rule of law cannot be absolute when other values – including those threatened by the current emergency – outweigh its importance (Waldron, 2016). Democratic states have stronger judicial systems, which can withhold some flexibility and should be quick to bounce back, but this might not be the case for those states whose democratic credentials are already under threat.

Despite Dr Wilkinson’s scepticism towards the prospect of a democratically strengthened Union, all speakers agreed that the Ukrainian conflict has awakened the EU, allowing it, as the popular saying goes in Dutch, to ‘jump over its own shadow’. Unity, cooperation and a new purpose under the auspices of the Versailles Declaration is shaking up the tired status quo. States idolising Russian authoritarianism have had to reconsider their backsliding position and have strengthened their commitment to the European liberal project. It is too early to predict whether internal reform will follow, but their realignment with the EU’s common values should not be dismissed. At the same time, leading states have been forced out of hibernation, ending, for example, Germany’s historically “soft” approach to illiberal regimes (Maihold et al., 2021). This is not just a political awakening but a popular one: EU citizens have had strong reactions against the Ukrainian conflict, and this may prompt stronger demands for internal change. Thus, despite the ongoing internal rule of law crisis, and the external threats of Russia’s authoritarian aggression, the EU – its institutions, its member states and its citizens – may have found its new purpose: to lead political, economic and ecological reform not through ‘soft nudges’ as it had done in the past, but through its transformation into a modern, robust and autonomous power.