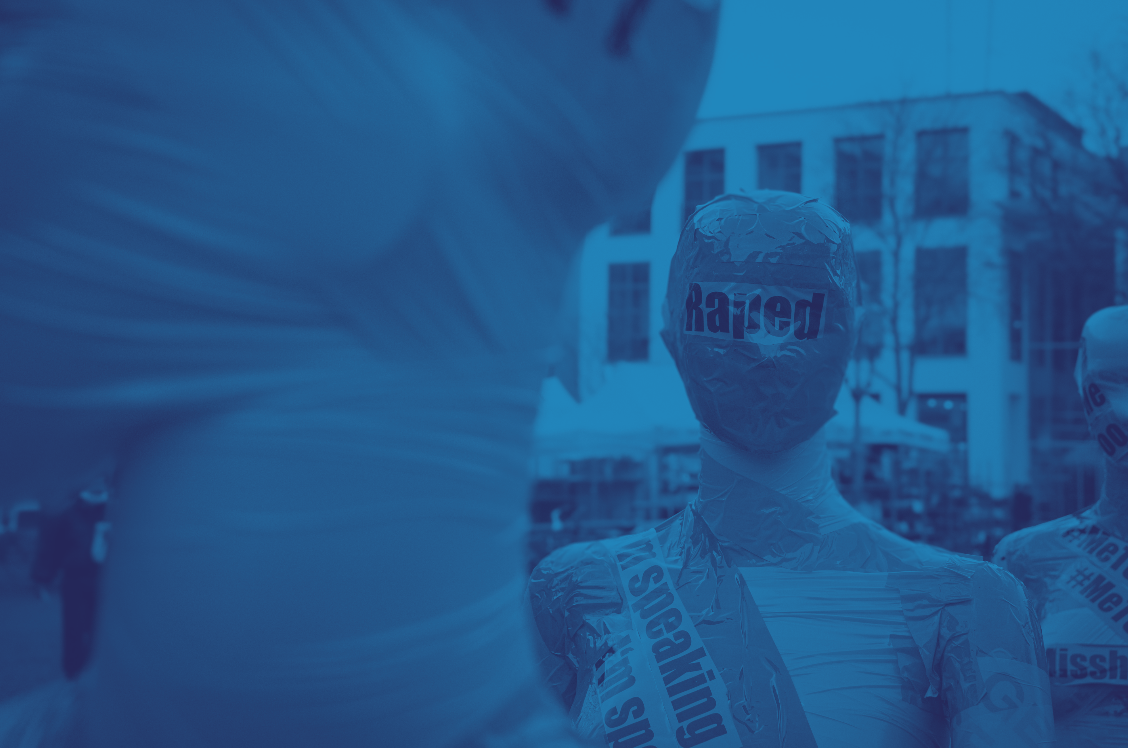 Is rape really a matter for the United Nations? The Security Council has answered that question with a resounding yes by voting unanimously for a resolution describing rape as a tactic of war and a threat to international security.” (Introductory text to Resolution 1820, United Nations Human Rights: Office of the High Commissioner, 2008).

The consequences of rape reverberate through the life of the victim. Surviving rape can entail physical impairments, unwanted pregnancies, social isolation, and long-term psychological traumas. Furthermore, the act of rape arguably violates basic Human Rights to life, privacy, equal treatment, and freedom from persecution and torture (The General Assembly of the United Nations, 1948). Although these seem universally agreed upon Human Rights, the specification of how they are upheld and protected is continuously negotiated by a state actor. Like when the U.S. 2019 contested Resolution 1820 arguing it supported abortion and additionally opposed the usage of ‘gender’ in the resolution, as it was deemed liberal language promoting transgender rights (Borger, 2019). An example that displays the importance of understanding, protecting, and developing our conceptualisations of sexual violence in the international context.

The UN’s final adaptation of Resolution 1820 on Sexual Violence as a Weapon of War in June 2008 was an arguably rather late paradigm shift in how sexual violence and rape is understood in the context of conflict (United Nations Human Rights: Office of the High Commissioner, 2008). Yet it marked an important turn around the perception of rape and seemed to open new opportunities for persecution and highlighting crimes of sexual violence at an international level.

The history of rape in conflict mirrors the history of warring itself, where rape for millennia has figured as the dirty, yet necessary outlet for soldiers far from home and the ‘normal’ company of women, rendering rape inevitable. The framework encompassing this mechanism is commonly known as the ‘Biological Urge/Substitution Theory’. This increasingly criticized ‘pressure cooker’ rationale rests on two legs, where firstly the male soldier’s libido is understood as a deterministic force of nature, which demands sexual satisfaction, ideally through women, framing the biological set-up of men as presenting unavoidable urges (Eriksson Baaz & Professor Stern, 2013). Secondly, the theory defines war as cancelling out male societal restraints, which otherwise regulate men from acting as their ‘natural’ self, where the underlying logic presumes a certain predestined development of boys into civilized men. Hence, the lifting of all social checks shows all men capable of rape, as their ‘natural beast’ is unleashed, thereby depoliticizing rape and closely tying sex with gender (Eriksson Baaz & Professor Stern, 2013).

As this has been the narrative shrouding countless acts of sexual violence committed over centuries, e.g. mass rape taking place during the Holocaust, such crimes have seldom been mentioned in ceasefire agreements, peace agreements or been prosecuted following the end of the conflict. This however changed in the aftermath of the atrocities in so-called rape camps resulting in up to 60.000 women being during the Balkan wars, 1992-1995, and the utilization of rape in the Rwandan genocide, 1994, where between 150.000-200.000 women suffered rape (UN – Prevent Genocide, 2014). These horrific crimes were later prosecuted as crimes against humanity and genocide in the Yugoslavian (1993-2017) and Rwandan post-war Tribunals (1994-2015) (E. Buss, 2009), thus for the first time introducing rape as a tactic and weapon within the legal framework. The confluence of these cruel conflicts reverberated through a historic promise of ‘never again’ made after WWII and the Holocaust, shocking the international community to pass a landmark resolution in 2000 acknowledging the challenges women and girls face in conflict zones, this unprecedented attention given to specific gender dynamics in war, laying the groundwork for the subsequent declaration of rape as a weapon of war (F. Crawford, 2017). This brings us back to the UN’s resolution 1820, of 2008.

The momentum from the gruesome details publicised at post-war tribunals made it possible to put sexual violence on the agenda on an international level and draw attention to this previously perceived ‘by-product’ of war. Yet to gather support at the UN’s general assembly and within the UN’s Security Council it had to be portrayed as a potential threat to peace, national security, and international stability, as is clearly stated in the first and fourth points of the final text of resolution 1820, where the UN Security Council:

1. Stresses that sexual violence, when used or commissioned as a tactic of war in order to deliberately target civilians or as a part of a widespread or systematic attack against civilian populations, can significantly exacerbate situations of armed conflict and may impede the restoration of international peace and security, affirms in this regard that effective steps to prevent and respond to such acts of sexual violence can significantly contribute to the maintenance of international peace and security

4. Notes that rape and other forms of sexual violence can constitute a war crime, a crime against humanity, or a constitutive act with respect to genocide, stresses the need for the exclusion of sexual violence crimes from amnesty provisions in the context of conflict resolution processes, (Resolution 1820, 2008)

This explains the ‘success’ of rape as a weapon of war discourse; by highlighting the issue of sexual violence in a language of international relations, with the nation-state and supranational institutions as actors, it made preventing rape relevant to maintaining world peace (F. Crawford, 2017). The resolution was largely hailed for finally acknowledging gender dynamics within the conflict, initially silencing most criticism around the cost of this perspective on sexual violence and women’s rights, with concerns about the practical follow-up on the resolution’s promises (Mollmann, 2008) (Drakulic, 2008). The discourse managed to shape an otherwise largely invisible aspect of the war in a light, which made it relevant to powerful actors, while still framing rape narrow enough to only require actual intervention when being implemented strategically in war. Thus, walking the line between raising awareness around the topic and simplifying a problem to the point of ignoring important nuances, by adapting the issue to the intended audience.

Rape as a weapon of war – a useful discourse?

However, resolution 1820 is criticized on a number of points. Some feminist scholars contest the high level of securitization of the issue, implied by rape exclusive figuring within a context of national sovereignty and security (Hirschhauer, 2014). The securitization of an issue demands an emergency response above the mechanisms of normal participatory democracy and gives voice to few actors in this process, where such usual emergency responses like intervention and sanctioning might further endanger vulnerable citizens in the conflict (F. Crawford, 2017). This also opens the discourse on rape to utilisation by state powers or other actors, which have ulterior motives to intervene. The framing of sexual violence, not as a gender issue, but rather one of military strategy and international security has thereby split the Woman’s Peace and Security Agenda (WPS), originally founded on the principle of empowering women, leading to a more peaceful and secure world for all genders and ultimately ending conflict (F. Crawford, 2017). Where the rape as a weapon of war discourse removes the agency and experience of the individual and translates it to an international relations setting, where rape only gains attention as a crime within the context of war.

The second point of criticism emerging is related to the language and underlying premise set in resolution 1820 when rape is described as a strategy of war. When a strategy is understood as: “a wider programme or plan designed to implement a (political) goal of warring – in this case often ‘humiliation of the enemy’ – tactic can be seen as the technique (rape) of implementing the strategy: ‘humiliation of the enemy’.” (Eriksson Baaz & Professor Stern, 2013, p. 52). The muddled, interchangeable usage of rape as a tactic, strategy, and weapon of war risks simplifying the problem and bypassing important distinctions to be made, when assessing whether sexual violence actually is systematically implemented in a military and political strategy or used as a less formalised technique within warfare. This point is taken a step further by Maria Ericksson Baaz and Maria stern in their book Sexual Violence As a Weapon of War?, 2013, where they examine the actual implementation of rape as a conscious tactic and diversify the simplified premise set by the UN resolution in showing how sexual violence against civilians often derail the overall political efforts of peace in a conflicted region.  On the other hand, they highlight the promise of change implied by the shift from rape as an unfortunate consequence of war or as spoils of war, to it described as a tool in war, where rape in conflict is characterised as systematic, strategic, and rational. Thus, placing the ‘concept’ within the moral confines of a world we understand and believe to be able to control, reform, and punish, compared to the uncontrollable urges of biology (Eriksson Baaz & Professor Stern, 2013).

This brings about another final aspect lost in the one-dimensional tone of the rape as a weapon of war discourse, because the danger of solely defining rape as a rational strategy of war, not only leaves a very small window for action and ignores the blurred circumstances of conflict and post-conflict in a war-torn country. The discourse disregards sexual violence resulting from wider, pre-existing cultural gender relations, merely exacerbated by a society suspended in conflict, through its focus on the rationale of war dictating the occurrence of rape within a set military strategy. This silences post-colonial concerns regarding the narrative, where local women must be saved from local men, by Western heroes in blue helmets. It silences debates on male victims when women figure as central in the resolution. Furthermore, it does not necessarily change the culture of rape or sexual violence used as a tool of power, against an individual of any gender, if it only gains relevance in the context of a conflict, which threatens international security and peace. This discourse simplifies the diverse narratives of perpetrators as well as victims, without offering much solution to changing a culture that prevents sexual violence overall, past punishing war criminals. Because war also opens opportunities for settling personal scores, it blurs the lines between military and civilian spheres, and past traumas of perpetrators and victims affect their meeting.