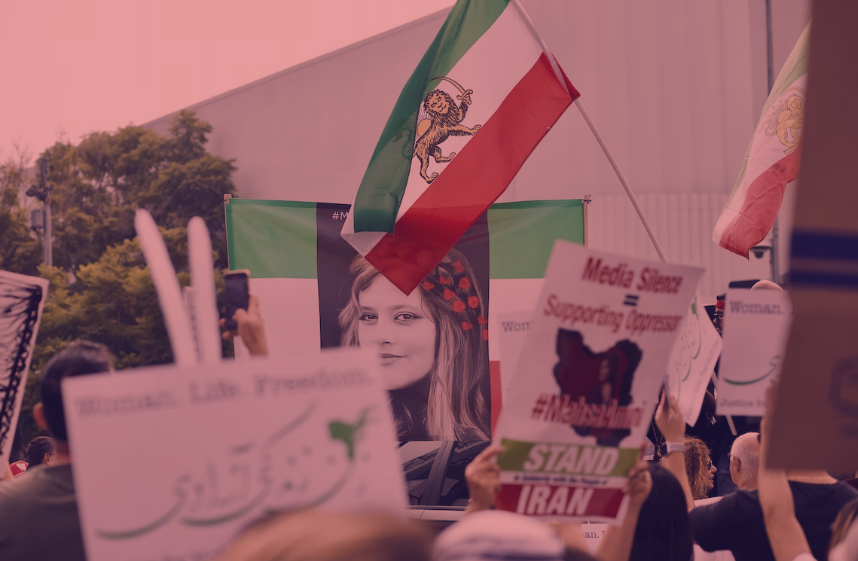 On the 16th of September, Iran once again appeared on the news around the world, but not because of the support provided to Russia’s war (Atwood, 2022)… This time, there was a different reason. Mahsa Amini, a 22-year-old Iranian woman, had died after being detained by the morality police, allegedly for violating Iranian rules which state that women’s hair must be covered by a hijab or a headscarf (BBC News, 2022). Although the police claimed that she died due to a heart attack, the circumstances under which the death occurred were highly suspicious.

The coroner’s report indicated that Mahsa’s cause of death was her pre-existing medical conditions, which would have led to the failure of her organs (Reuters, 2022). However, this raises suspicions for two reasons: on the one hand, there are reports from witnesses stating that Mahsa was attacked during her arrest, which induced bruises on her legs. Having this situation in mind, her father believes that the responsibility for her death lies on the morality police (Reuters, 2022). On the other hand, questions regarding the independence and the impartiality in the report’s preparation arose since the responsible coroner belonged to the Iran Medical Organization, which, although declaring itself independent, is part of the State judiciary (Abbasi, 2022).

Mahsa’s funeral triggered protests by the Iranian population, especially women, which still continue today. They are demanding more freedom, as well as the abolition of the current regime. In order to minimise these protests, the authorities are violently repressing them (BBC News, 2022). According to the Iran Human Rights group website, at least 448 people have been killed by security forces, of which 51 are children (Iran Human Rights, 2022).

Furthermore, on the 14th of November, the Iranian government declared the first death penalty for a protester. Five others were sentenced between 5 to 10 years in prison by another court (Iran International Newsroom, 2022). Five days later, an additional five protesters were sentenced to death and at least three children are now facing death penalty charges (Iran Human Rights, 2022).  It is not known when or where the trials took place, nor whether the accused had the opportunity to exercise their right to defence. What is known, however, is that, in cases like this one, the government generally does not allow the accused to choose their lawyers, and nor is the due process followed (Iran International Newsroom, 2022).

Countermeasures adopted by the EU

On the 12th of April 2011, the Council of the European Union adopted the regulation No 359/2011, concerning restrictive measures implemented against certain persons, entities and bodies due to the situation in Iran. These measures targeted, among others, persons responsible for grave human rights violations in the repression of peaceful demonstrators, journalists, human rights defenders, students or other persons who spoke up in defence of their rights.

On the 14th of November of this year, the EU approved a new round of sanctions against Iran which deal with the brutality of the repression carried out by the regime. These include 29 individuals and 3 entities because of their role in both the death of Mahsa Amini and the violent response to the protests that followed (Tidey, 2022). These sanctions were essentially focused on asset freezing and travel bans. Among the individuals sanctioned are four members of the group that detained Mahsa, the head of the Iranian Cyber ​​Police, who arbitrarily arrested people for criticising the regime online, as well as the Iranian Minister of Interior, who committed serious human rights violations (Council of the European Union, 2022).

The EU also accused the state television station of producing and broadcasting forced confessions of the detainees (Tidey, 2022). European citizens, as well as companies, are prohibited from making funds available to listed individuals and entities. Exports to Iran of equipment that could be used in internal repression and monitoring of telecommunications were also banned (Council of the European Union, 2022).

Finally, the EU demands the end of violence against those who protest peacefully, the release of those who have been unjustly detained, and the guarantee of the free flow of information and access to the internet  (Council of the European Union, 2022).

The position of the United Nations

On the 16th of November, the Third Committee of the United Nations General Assembly, which is responsible for social, humanitarian and cultural issues, adopted a draft resolution on the human rights situation in Iran, approved by a recorded vote of 80 in favour, 28 against and 68 abstentions. The assembly expressed concern regarding the frequency with which the death penalty is being used in the country and called on the Islamic Republic to cease the use of excessive force against those who have protested peacefully since the death of Mahsa Amini, as well as all forms of systematic discrimination (United Nations, 2022).

A landmark resolution has also been passed last week, on the 24th of November, by the UN Human Rights Council to establish a fact-finding mission in order to investigate human rights violations related to the protests in Iran. Amnesty International finds this an important step which “shows that the cries of people in Iran have finally been heard” (Amnesty International, 2022).

As mentioned above, there remain doubts about the cause of Mahsa Amini’s death: was the influence of the morality police on her death direct or indirect? Clarifying what happened through an independent and transparent entity could allow the responsible individuals to be held accountable.

Given the violent repression of protests by the police, the principle of proportionality is being violated: the latter stipulates that violent acts like these must always be necessary, suitable and balanced (Möller, 2012). Thus, the police’s  actions are unjustified and violate the right to peaceful protest, a fundamental right. In the same vein, the police is targeting freedom of expression: Iranian authorities have imposed severe restrictions on Internet access for Iranian people and blocked instant messaging platforms (Council of the European Union, 2022).

Given the violence used by the Iranian authorities, the EU has quickly taken action, expediting the design and implementation of a set of sanctions against the Iranian regime. Nevertheless, in the words of the Greek MEP Anna-Michelle Asimakopoulou, EU sanctions are “a mosquito bite (…) when you need a cobra bite” (Mahon, 2022). The EU’s reluctance may be due to their current focus on the war in Ukraine or to the role played by the EU on coordinating talks aimed at reviving Iran’s nuclear deal with world powers (Al Arabiya, 2022).

While the UN fails to take concrete and effective actions, the number of protesters killed, beaten and condemned to death continues to increase. This failure to act from the UN’s side is due to several reasons. According to Goli Ameri, “Iran is already busy lobbying friendly UN member states (and trade partners) while doing everything possible to block investigations of the regime’s conduct” (Ameri, 2022). In fact, the UN Special Rapporteur on Human Rights in Iran was precluded from entering the country, while another UN Special Rapporteur – this one on the negative impact of unilateral coercive measures on the enjoyment of human rights – was allowed to. The latter concluded that sanctions impact the country’s economy negatively, which leads to the increase in human rights violations (Ameri, 2022).

The fact-finding mission established by the UN – with the aim to gather, analyse and preserve evidence of the violations – was created as a response to the demands to establish an international investigative mechanism, to ensure accountability and to end impunity for these violations in Iran (Article 19, 2022).

Lastly, it is important to highlight the role of Amnesty International, which has been reporting the crimes and the grave human rights violations committed by the Iranian authorities. Besides that, it has also been working on the establishment of an international investigative and accountability system for years, which now seems very pertinent (Amnesty International, 2022).

May the death of Mahsa Amini and the daily persecution suffered by those who fight for their own rights not be just a shocking reminder of the fragility of human rights. It could act as a necessary impulse to alleviate impunity and ensure international accountability to prevent violations like this one from happening any more.