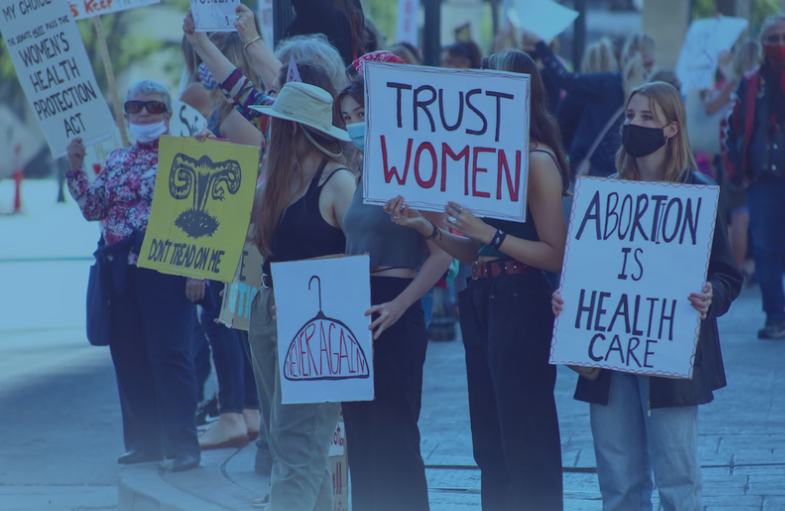 Article 1 of the Universal Declaration of Human Rights begins with the statement that “All human beings are born free and equal in dignity and rights” (United Nations, 1948), therefore intentionally highlighting that human rights emerge at the moment of “birth”, hence, excluding the fetus from application of human rights in any form. As Zampas et al. (2005) argue, “no one has the right to subordinate another, in the way that unwanted pregnancy subordinates a woman by requiring her to risk her own health and life to save her own child” (pp. 120-122). Prohibition of the right to abortion questions the fundamental human right to life and liberty and underlines the legitimacy of the law that explicitly prevents women from exercising their liberty to decide over their health and body. According to Blackstone, the law is “a rule of civil conduct prescribed by the supreme power in a state, commanding what is right and prohibiting what is wrong” (Lewis, 1968, pp.336-38). Drawing from the aforementioned concept, any organ adopting the prohibition of the right to abortion ultimately postulates that the right to abortion is wrong, thus coming into conflict with the Universal Declaration of Human Rights which establishes the right to freedom of choice (217 A (III), 1948). After the U.S Supreme Court overturned the right to abortion, access to abortion is being questioned across the European Union, where conservative activists are presently attempting to chip away at civil rights. This paper aims to analyse the implications that might stem from the de-facto ban on abortion in the US.

The idea of defining human rights and their applicability on issues surrounding the well-being of human beings was first evoked at the International Conference on Population and Development (ICPD) in Cairo in 1994, when the Vatican delegation suggested that “the right to life” be among the guiding principles of the ICPD program (Zampas et al. 2005, p.120). However, negotiations on fetal rights were never formally initiated. On the contrary, it was important not to cede the “right to life” to the Right, but to have internationally recognised that “women’ rights to life are at stake when health and reproductive rights are denied” (Zampas et al. 2005, p.120). The tendency of acknowledging fundamental women’s rights remained the same throughout Europe until recently, as Goldberg (2021) elaborates:  “Although the general trend has been one of progress towards liberalisation, in recent years some countries in Europe have witnessed attempts to roll back existing legal protections for women’s access to abortion” (pp. 1-2). Although the European Parliament declared the right to a safe abortion to be a human right and, in doing so, urged EU Member States to “condemn any attempt to limit access” to any reproductive utilities (De La Baume, 2021), in practice, the access to reproductive utilities varies greatly across Europe (Wanat & Martuscelli, 2021). The epicenter of the Europe’s abortion debate has been Poland since it adopted a near-total ban in 2020, with the Constitutional Tribunal of Poland arguing that pregnancies could not be terminated because of fetal defects. Martuscelli and Bencharif (2022) elucidate that the ban was politically motivated in that it was promoted by dominant Catholic groups within the country, and is not backed up with the legitimate claim of why women should be prevented from making decisions regarding their bodies. Similar to the U.S case of Roe v. Wade, perspectives regarding the issue are divided between conservatives and liberals (Wanat & Martuscelli, 2021). Despite the drawbacks of the already adopted restrictions on abortion, in Poland the government officials are keen on pushing the law to its extremes by establishing a near-total ban on access to abortion (Wanat & Martuscelli, 2021). However, the death of a thirty-year-old woman sparked protests across Poland, following a lawyer representing the victim’s family stating that a decision not to carry out a life-saving abortion was due to Poland’s newly-adopted near-total ban (Wanat & Martuscelli, 2021). The case exemplifies the difficulties women face in countries that on religious or ideological grounds force women to go against their will and bear a child no matter the circumstances (except for cases of rape).

Along with Poland, five European countries – Liechtenstein, Andorra, Malta, San Marino, Hungary, and Monaco – have highly restrictive laws on abortion (Goldberg, 2021). For instance, Liechtenstein permits abortion in case of a woman’s life or health being at risk or the pregnancy being the result of sexual assault (Goldberg, 2021), while Monaco permits it if the pregnancy is a result of sexual assault, or if it involves a severe anomaly (Goldberg, 2021). Six European states (Andorra, Liechtenstein, Malta, San Marino, Monaco, and  Poland) justify ratification of the ban on abortion on account of the Convention on the Rights of the Child (CRC) (A/44/49,1989). Both interpretations made by its expert body of CRC and travaux préparatoires (negotiations) established that CRC does not recognize the right to life until birth. However, the contradictory argument is based on its Preamble’s 9th paragraph, which highlights that ‘‘bearing in mind that, as indicated in the Declaration of the Rights of the Child, ‘the child, by reason of his physical and mental immaturity, needs special safeguards and care, including appropriate legal protection, before as well as after birth’’’ (Preamble, Para.9). What it mirrors, at most, is recognition of a country’s duty to ensure support for the pregnant woman and her child after birth. Hence, travaux préparatoires clarifies that this obligation ought not to impact a woman’s choice to terminate pregnancy (Zampas et al. 2005, p.121). The original draft of the Preamble of the CRC did not envisage reference to a child’s right to protection ‘‘before, as well as, after birth”, although the wording had been put in practice in the earlier CRC (CRC/C/34,1994). The delegation of the Vatican proposed to add this sentence along with a statement ‘‘that the purpose of the amendment was not to preclude the possibility of an abortion’’ (E/CN.4/L/1542,1980). Even though the concept of ‘‘before or after birth’’ was finally accepted, its limited scope was made clear by the statement that ‘‘the Working Group does not intend to prejudice the interpretation of Article 1 or any other provision of the Convention by States Parties’’ (Ibegbu, 2000). Hence, even from the perspective of the CRC, women cannot be made to carry children against their will.

A ban on abortion, along with its moral and legal flaws, brings with it complications in that it provides narrow exceptions for saving the lives of pregnant women. It might augment criminal penalties for those providing abortion services and bring with it a lack of concessions for incest and rape (Glenza, 2022). In addition, according to ODCHR, “it is discriminatory for a state party to refuse to legally provide for the performance of certain reproductive health services for women” (A/54/38/Rev.1, chap. I). The neglect of women’s right to make autonomous decisions regarding their bodies goes beyond discrimination, it undermines their right to privacy and equality, thereby jeopardising the precondition for their enjoyment of other rights (A/HRC/38/46, 2018). The legitimisation of the ban on abortion does not safeguard human rights, but, on the contrary, creates precedence for their violation. Despite the fact that, from a moral perspective, the termination of a pregnancy might be perceived as an “immoral” act, it is a fundamental right of a human being to make decisions regarding their body, be it out of medical necessity or simple unwillingness to bear a child.

To summarise, the Universal Declaration of Human Rights provides human beings with rights forming the basis of life, liberty, and the security of person. Hence, women have the right to make choices regarding their bodies without external constraints, sometimes for the pursuit of happiness, sometimes to save their lives and, sometimes, to liberate themselves from the burdens of being a mother and the societal circumstances this brings with it. The right not to be discriminated against, the right to privacy, life, liberty, and the right to make choices about their own body are violated by restrictions on the right to abortion. The ban on abortion can thus be seen as a judicially “legitimised” violation of human rights.