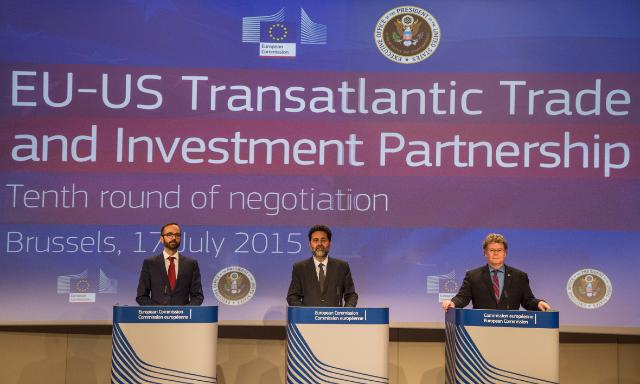 By Melle Scholten, MA student of International Relations in Groningen, having previously completed a BA in European Studies in Maastricht.

Without a whole lot of publicity, Greenpeace released 248 pages of confidential TTIP-negotiation documents this week[i]. Considering TTIP has been the one European Union foreign policy issue that has received plenty of attention in both the media and public sphere, this lack of attention might seem strange. It is, of course, not at all when you consider those 248 pages are full of technical babble, tiny disputes on language and not much else. It’s simply not interesting enough, and hardly anyone will take the time to go through it all. Nevertheless, there are several interesting conclusions to be drawn from these leaks.

1: A final agreement will not be finalised before the summer, but that does not necessarily mean the end of TTIP. This should not come as a shocker, as virtually every EU official involved in TTIP has already hinted at it[ii]. We know that these leaks comprise about half of the entire negotiation document and we know that they originate from the period June 2015 to April 2016. This means that they cover three rounds of negotiation, and are up to date as of the twelfth and latest round in Brussels. Considering how many substantial disagreements remain between the EU and U.S.A., a deal before the end of President Obama’s term in office seems unlikely.

If that will be a deathblow for TTIP remains to be seen. Donald Trump and Bernie Sanders have both professed their disdain for the agreement in their populist message focusing on industrial states scared of losing jobs. However, even they will have to deal with the realities of international relations when they step into office. Who occupies the Oval Office might change, who occupies many of the bureaucratic seats will probably not. If a Trump or Sanders presidency will even happen remains to be seen, as Hillary Clinton very much seems like the prodigal daughter finally stepping into the Oval Office. Sanders has pushed her to be harder on TTIP and other Obama-era Free Trade Agreements (most notably the Trans-Pacific Partnership), but she will most likely see the TTIP-negotiations through to the bitter end.

More interesting is perhaps whether TTIP will be ratified before France and Germany elect new parliaments (which they will do around May and August-October[1] 2017 respectively), and if the United Kingdom will have started its Brexit procedure by then. This is perhaps too long term to make any sensible arguments based on the current state of the documents, but we should bear in mind that TTIP will have to be ratified by the national parliaments. A Bundestag under pressure from the rise of the Eurosceptic Alternative für Deutschland, and a European Parliament without its Atlanticist UK-members might not be willing to ratify any TTIP-agreement.

2: The Commission’s vow to not pursue a “TTIP-lite”[iii] is most certainly honoured. The documents show that the EU is a bargaining partner adamant on including many regulations on the safety of food, labelling, animal testing and others. Especially the former chapter on an International State-Investor Dispute Settlement (ISDS, now simply “Dispute Settlement”) is subject of hot debate, with the EU hoping for an independent body of arbitration that will handle any and all disputes on trade in the near future, while the U.S. are unwilling to budge on the principle of a joint bilateral committee.

Any doubts that the EU would pursue a final agreement before the summer will have been laid to rest. There are many concerns regarding TTIP from all sides of the civil spectrum. Indeed, TTIP holds the questionable honour of having been campaigned against by both farmers’ interest organisations and environmentalists. To what extent do the EU demands match the demands of the stakeholders?

Quite a bit as it turns out[iv]. Most areas of concern for environmentalist protesters (labelling of GMOs, animal testing of cosmetics), consumer organisations (product/food safety) and farmers (origin of product labelling, name protection) are addressed by what the EU is demanding. Off course whether those demands will be met by its sparring partner and at what cost, remains to be seen. It is highly unlikely that the United States will roll over on these issues without any major concessions in other areas.

3: The U.S. sees TPP as blueprint, the EU sees CETA[2] as blueprint. It is clear from the chapters on dispute settlement, sanitary and phytosanitary issues, and origin protection that neither the U.S. nor the EU are interested in shaping an altogether novel agreement. And considering the time and effort put by both parties in TPP and CETA (the EU’s agreement with Canada) respectively, this is hardly surprising. In many ways, TTIP will most likely end up as the lovechild of the most important rules in those two agreements. This also explains some of the major stumbling blocks for TTIP, as witnessed in the reluctance to budge on issues like competition regulation and the aforementioned dispute settlement system.

It also makes the negotiation process between the two parties an altogether torrid and drawn out affair. Both parties are aware of what the other one wants in the long run and how it aims to get there, because both parties already went through this very same process. It might seem like this would be a good thing, as it would mean both parties could leave out the haggling part of the negotiations. In reality, it means that both parties are getting frustrated with the other refusing to play ball. The Greenpeace leaks make it clear that this copy-paste approach to TTIP is getting neither party anywhere. The EU and U.S. need to acknowledge that TTIP is unique, and it must be agreed upon in a unique manner if it is to be agreed upon.

4: Basically, we can’t say with certainty what a ratified TTIP will look like. As mentioned above, there is a lot that has yet to be agreed upon before TTIP can even enter the review phase of negotiations. As soon as it released the leaks, Greenpeace announced that what was said in the documents was cause for immediate concern[v], but it is simply too early to say if that is truly the case. Much of what is cause for concern about TTIP still lies on the negotiating table. And in most cases, it looks like the EU and environmentalist action groups share a common goal.

5: Nevertheless, these leaks may be very important for a whole other reason. They may yet serve to reinvigorate the TTIP-debate with a moderated voice. Neither a complete rejection nor acceptation of TTIP in its current form is beneficial for the European Union or the United States. Public debate and civil action forced the EU to rethink the ISDS-mechanism and come with a novel model for the CETA-agreement. It seems like it needs the same kind of push in the back to come with creative, innovative ideas to bring TTIP to an acceptable end for all parties involved.

I believe TTIP needs to happen to aid two ailing economies. I also believe it needs to happen while honouring the agreements of the Paris summit, and maintaining adequate levels of consumer protection. I do not see the two as mutually exclusive. Only in a public debate where both sides are heard by all can we achieve this goal. Too often public debate takes place in an “echo well”, where one’s own arguments are constantly echoed back to reconfirm his or her own points of view. This is not the way forward: a constructive dialogue is.

[1] The exact date for the German elections has not been set yet.