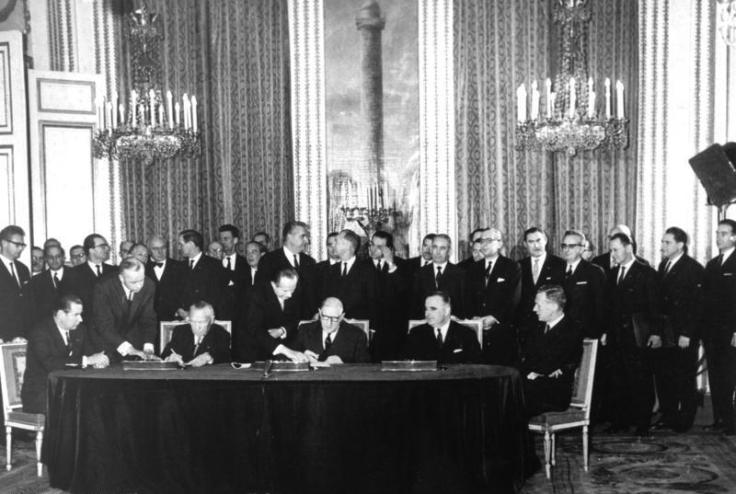 On January 22th 1963, German Chancellor Konrad Adenauer and French President Charles de Gaulle sealed the symbolic beginning of the Franco-German friendship as they signed the Élysée Treaty in Paris. That brief document of just under six pages, seen as a major milestone in the process of reconciliation between the two neighbouring countries, established new mechanisms of permanent cooperation between France and Germany. As stipulated in the treaty, German and French government representatives were to meet at regular intervals in order to discuss important policy matters, particularly those related to foreign affairs, defence, education, youth and culture. Eighteen years after the end of World War II, the two former bitter enemies were ready to eliminate their ‘age-old opposition’ and to take the path of partnership. As a result, they were to become the engine that would drive the process of European integration in the following years.

The Franco-German Motor: Cooperation Through Compromise

Indeed, two Franco-German couples had great influence over the European construction from the 1970s onwards. Chancellor Helmut Schmidt and President Valéry Giscard d’Estaing left their mark on the 1970s with the 1979 European Monetary System, while the next two decades were characterized by the work of the duo Kohl-Mitterrand. It should nonetheless be remembered that such initiatives were not necessary destined to result in achievements.

As a matter of fact, Germany and France had different views over the method of pursuing the European integration all over the second half of the 20th century. Their divergences were particularly strong regarding their economic preferences; France promoted a monetarist doctrine whereas Germany argued for an economist approach. In other words, the French supported the idea that an economic federation with a single currency should be set up before economic policies could be coordinated, insofar as the single currency should act as a catalyst for the achievement of economic harmonization. On the other hand, Germany believed that supranational monetary policies like a single currency could come only after monetary and budgetary policies had been harmonized. Additionally, Germany advocated the opening of markets and free market competition, in contrast to France which had more protectionist preferences and pressed therefore for European interventionism via common policies. These diverging preferences on economic policies might be explained by France’s and Germany’s different economic situations at the time. Germany had a strong economy and a strong currency, which was revaluated several times during the 1970s-1980s economic crisis. On the contrary, France was more subject to inflation, which caused several depreciations of the franc.

In spite of all their divergences, it is therefore worth noting that France and Germany were able to overcome their fundamental differences through a bilateral practice. Bilateral negotiations could succeed partly because the heads of the French state and the German government had good personal relations with each other – Helmut Schmidt and Valéry Giscard d’Estaing even became friends. However, the importance of the professional cooperation mechanisms which had been implemented through the Élysée Treaty should not be undermined since they enabled the institutionalization of the Franco-German bilateral relation. After all, the Élysée Treaty provided the opportunity for government representatives to discuss and find solutions together during regular formal and informal Franco-German meetings.

Moreover, the duos Schmidt-Giscard and Kohl-Mitterrand were characterized by the political will to reach compromises. Chancellor Schmidt and President Giscard d’Estaing shared thus the will to create a zone of monetary stability in Europe and managed to find compromises leading to the establishment of the European Monetary System (EMS) in 1979. The aim of the EMS was to stabilize inflation in Europe and to stop large exchange rate fluctuations between European countries by limiting them to a maximum of 2.25 %. The benchmark currency European Currency Unit (ECU) was created along with the EMS as a means to set central rates.

A decade later, Chancellor Kohl and President Mitterrand worked together and reinforced the bilateral cooperation mechanisms as they established an additional security and defence council as well as an economic and financial council on the 25th anniversary of the Élysée Treaty in 1988. The formation of a Franco-German Brigade one year later was a significant step towards further cooperation. That joint army corps has since been placed under the command of the EU-wide Eurocorps, which was created in 1993 as a result of the 1989 bilateral initiative aimed at strengthening Franco-German military and defence cooperation. Furthermore, the then heads of the German government and the French state collaborated closely during this period in order to complete the single market and to implement the Economic and Monetary Union (EMU). As a consequence, the 1992 Maastricht Treaty foresaw the supranational coordination of European monetary policies while economic and fiscal policies were to become a matter of intergovernmental decision.

It is thus clear that the Franco-German capacity to work out compromises enabled the two countries to play a central and driving role in Europe. In a sense, the Franco-German tandem reflects what Europe as a whole constitutes today: a forum of negotiations meant to find compromises despite the various, different and sometimes opposed preferences of individual member states.

Can France And Germany Still Be Europe’s Driving Force?

The 1963 Élysée Treaty implemented durable mechanisms that were complemented over decades and enabled the two former hereditary enemies consequently to become efficient partners as well as Europe’s engine. However, the idea of a motor essential for the process of European integration seems currently to be losing credibility. As a matter of fact, the Franco-German couple happens to have not accomplished much in recent years. On top of that, new discrepancies regarding the way of managing the current economic crisis, Greece’s debts and the refugee crisis have recently begun to surface between the two partners – without real compromises to be found.

The current dynamic of the Franco-German cooperation might be affected by the 2017 upcoming elections in France and Germany – and the Franco-German dialog might hopefully be given a new impetus depending on the outcome of the elections.

By Moïra Tourneur, student in European Affairs at Paris-Sorbonne University and EST ambassador to France. Feel free to contact Moïra at est.contact.france@gmail.com.