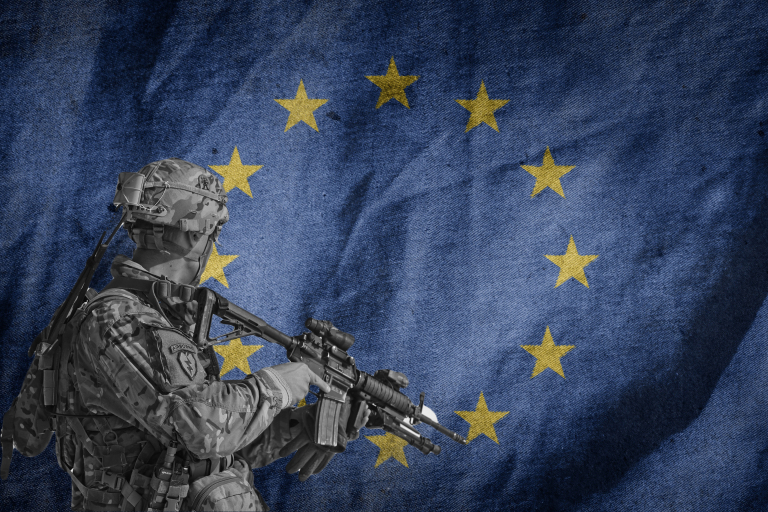 A Twenty-Seven Nation Army? Discussing the Likelihood of a Common Army for the European Union

The EU foreign ministers convened on March 6, 2017 in Brussels to create a legal framework for the EU Military Planning and Conduct Capabilities, a quasi military headquarter and board of expertise for EU missions abroad, which is planned to start its work in June 2017. This step reignites the debate on whether there are plans to create an EU army, a term cautiously avoided by EU bureaucrats in an effort to pave the way for deeper defence cooperation in an age where the EU’s integration efforts are more contentious than ever. The idea of an EU army, however, is as old as the EU itself:

“[W]e should make a gesture of practical and constructive guidance by declaring ourselves in favour of the immediate creation of a European Army under a unified command, and in which we should all bear a worthy and honourable part.“-

In 1950, Winston Churchill spoke before the Council of Europe to make the case for a European army. He deemed its creation of utmost importance in face of the danger of a Soviet attack on Western Europe. The Council adopted his motion to include language calling for the immediate establishment of such a European army, but as time went on, the words were never translated into action.

More than six decades later, the idea is still advocated by prominent figures of the European project, most recently by Jean-Claude Juncker, President of the European Commission, using a rationale that may strike you as surprisingly similar to Churchill’s motive: In 2015, Juncker called for the creation of an EU army in order to promote the EU as an international force and signal to Russia that the EU is serious about defending its political and social principles.

Especially the European People’s Party (EPP) has repeatedly championed the idea. Joseph Daul, the EPP’s chairman, used the EPP’s 2015 party conference to promise that an EU army will be here faster than people may imagine. The EPP then released a statement identifying the objectives of the said EU army laying in the ability to intervene on a larger scale and defend European territory in coordination with the NATO.

Furthermore, the statement calls for the application of the much debated Permanent Structured Cooperation, or PESCO, as a contemporary solution, which ought to mark the starting point of the road towards a Union of European Defence. One could argue that the term PESCO is merely being used as a fig leaf to cover the true intention of its proponents so as not to worry any member states that an EU army could be formed any time soon.

In the past, these proposals were usually brushed away by the British government. It makes sense then that, now that the United Kingdom has voted to leave the EU, the debate about an EU army was reignited. Brexit certainly marks a watershed in the discourse and in a broader perspective. The EU of 2017 finds itself engulfed by sources of uncertainty.

There are on-going conflicts in Iraq and Syria, which have driven away millions of displaced people, filling refugee camps in countries neighbouring the conflict zones. A gradual reduction of European financial aid to those neighbouring countries correlates with the arrival of asylum seekers at the outer borders of the EU, often after having had to perilously cross the Mediterranean Sea.
Europe’s inability to agree upon a common and consistent policy to handle this challenge led to the agreement with Turkey, which now acts as a gatekeeper for the EU – a service for which the EU, in exchange, adopted a line of reserve amid undemocratic tendencies of Turkish President Erdogan following the thwarted coup in July 2016. The Union remains divided as to whether accession talks should be terminated and how to address Turkish threats of opening its gates towards Europe, letting refugees enter the EU.

On its Eastern borders, the EU has seen Ukraine continue to fall apart as tensions between Ukrainian military forces and pro-Russian separatists wreaked havoc.
Finally, the election of Donald Trump as President of the United States brings with it the promise to reduce the US’ contributions to NATO and the demand that fellow NATO members pay their fair share to sustain the organization’s security umbrella.

The total of these developments presents a cornucopia of uncertainty, which some members -including France, Germany and Italy – would now like to overcome by concentrating the member states’ military capacities. In September, Italy made its voice heard by proposing a joint military force based on a coalition of member states willing to contribute. It may come as a surprise that even Hungary and the Czech Republic, two of four Visegrád states, probably the most prominent opponents of the ever-closer union ideal, supported the proposal.

While there clearly is momentum for the plans to create an EU army, the current state of the EU’s military forces seems somewhat paradox. It is best described as a patchwork of military units and structures provided by the armed forces of member states. There are multiple EU missions in the Balkans, Middle East and Africa, mostly consisting of national forces of states interested in preserving their historic influence in a certain region.

While EU member states have spent a total of €203.143 billion on defence in 2015 (to put that into perspective: China’s budget amounted to €145.8 billion while Russia’s was €65.6 billion), the usage of these budgets has been largely inefficient as the EU defence policy lacks cooperation and common policy to adequately address the challenges it faces.

One main reason why calls for an EU army were not heard or not heeded was that 22 of the EU’s current 28 member states are also part of the NATO. The NATO, under the aegis of the United States, was traditionally perceived as Europe’s military patron. The Obama administration even estimated funding for the European Reassurance Initiative at €3.1 billion in its fiscal year defence budget request – a fourfold increase compared to the 2015 request. The main priority of the European Reassurance Initiative is the deterrence of Russia. With Obama leaving office in January 2017 and his successor’s prospective de-prioritization of NATO and rapprochement between the United States and Russia, the EU suddenly finds itself under a security umbrella impending to spring a leak.

When it comes to the unification of EU defence policies and structures, the crucial question remains how interests and obligations of NATO member states can be harmonized with those of non-NATO members Austria, Cyprus, Finland, Ireland, Malta and Sweden. Although a numerical minority, they will make themselves heard due to the fact that decisions regarding the Common Foreign and Security Policy require una

nimity in the Council of the EU.

Amid the statements by President of the Commission Juncker calling for an EU army, it seems likely that such plans would be considered an infringement on some states’ neutrality.

However, Article 42 TEU could serve as precedent of how neutral member states could be part of a joint EU military force, while still keep their neutrality, as it intends that EU members carry the obligation of aid and assistance toward another member state who has fallen victim of armed aggression on its territory. While this could mean that a neutral country would have to enter combat to support a fellow EU member as an act of solidarity, the article was amended by a clause clarifying that this obligation of assistance “shall not prejudice the specific character of the security and defence policy of certain Member States”.

In short, while member states are obliged to help other member states that have been attacked, they only have to do so in compliance with their own security policy. Therefore, the article has withstood criticism regarding its compatibility with the neutrality of some EU members.

On the other hand, the fact that Spanish officers could have command over Croatian soldiers is a thought that may seem troubling to some member states who consider the sway over their armed forces their nation state’s sovereign right.

In June 2016, the EU Global Strategy was released in order to set the tone for a more concerted Foreign and Security Policy. With regard to defence policy, it urges to take greater responsibility, and further reads that the EU should be able

“[…] to deter, respond to, and protect ourselves against external threats. While NATO exists to defend its members – most of which are European – from external attack, Europeans must be better equipped, trained and organised to contribute decisively to such collective efforts, as well as to act autonomously if and when necessary.”

The EUGS Implementation Plan on Security and Defence, adopted on Nov 14, 2016 by the Council of the EU, both urges member states “to agree to explore the potential of a single and inclusive PESCO” as well as suggests to deepen cooperation, deliver the required capabilities together, adjust the EU’s structures for situational awareness, planning and conduct, and increase financial solidarity.

It may seem a fitting analysis that given the changing environment of Europe’s security, EU bureaucrats are determined to capitalize on the current insecurity and willingness of the Union’s most influential member states. While the term EU Army is still cautiously avoided in the discourse, plans to establish the foundation for such a joint military force undeniably exist. The EU will have to find a way to emancipate its security policy while maintaining cooperation with NATO. It is yet to be seen how such an endeavour could be reconciled with neutrality obligations of some EU member states. Furthermore, the proposal could be blocked by a change of power introduced by the impending elections, first and foremost in Germany, France and the Netherlands, which could bring populist leaders to the negotiating table. The proposal’s success will not least hinge on whether an even greater centralization of power in the hands of Brussels will be accepted by the people – that is to say: whether national governments will manage to win support for more security in exchange for less political self-determination.

“Stefan Pfalzer is a Viennese student currently spending his exchange semester at Sciences Po in Paris. Previously, he has been working as an intern for the Austrian Institute for International Affairs, a Tanzanian NGO focussing on community development and youth empowerment as well as an Austrian NGO monitoring human rights.”

Barigazzi, J. (2017): EU to Set Up New Military Unit Which Officially is Not an EU Military HQ.  Available at: http://www.atlanticcouncil.org/blogs/natosource/eu-to-set-up-new-military-unit-which-officially-is-not-an-eu-military-hq (Accessed on March 6, 2017)

Politico (2016): The almost-an-EU-army plan. Available at http://www.politico.eu/article/italy-proposes-joint-european-military-force-schengen-of-defense/ (Accessed on November 27, 2016).