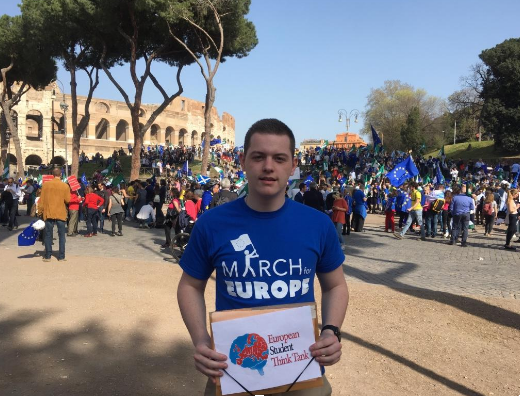 Saturday the 25th of March marked the 60th anniversary of the Treaty of Rome – a time for celebrations around Europe. It seemed that celebrating was a necessity in these time of turmoil and crisis, in opposition to the voices raised against the EU. The so-called “silent majority” stood up. But apart from this celebration, one could find real incentives to not only support the European Union, obviously, but also to accelerate the integration towards more federalisation. That is what the March for Europe was about.

I participated in the main event in Rome myself; the main event in the sense that the “official” March for Europe was held in Rome. However, many other marches took place in many European cities, sometimes gathering more people, especially in London where around 80.000 persons marched for Europe and against the Brexit.

Here in Rome, the atmosphere was very nice. Also, the good weather during the weekend has helped making the demonstration even better. The day of the celebration started with a conference named “Europe fights back: re-building vision, re-gaining trust, re-launching unity” where one had the opportunity to hear speeches from Members of the European Parliament, politicians, several presidents of European associations and movements, professors and philosophers.

During the conference the motto was clear, as recalled by Elmar Brok (EPP MEP and President of the Union of European Federalists): “We are much stronger together”.  All speeches and panel discussions were an appeal to the celebration of the achievements of the European Union – notably the ongoing peace in Europe -, but also a call for further actions.

Following this conference, the participants of March for Europe gathered in the Piazza della Bocca della Verità. I was somewhat amused that this place named “The Mouth of Truth” in English was chosen to talk about a stronger future for Europe. It was with this spirit of enthusiasm with which the march to the Colosseum started. The parade was full of joy, and one could hear slogans and singing in Italian, Spanish, German and French. Finally, it was in the idyllic setting of the Colosseum and the arch of Constantine where the final gathering took place. It was another chance for all participants to show their European pride and express their calls, among which: “Europe unite or perish”, “Fedezazione Europea Subito!” (European federation now) and many others.

Meanwhile in Rome, the Head of States and Governments of the European Union (minus the United Kingdom) met on the Capitoline hill – where the Treaty of Rome was signed 60 years ago – to discuss their future cooperation within the European Union. Donald Tusk, president of the European Council thereby advocated for a united Europe in an emotional statement talking about its own history.

At the end of the afternoon, representatives of those countries signed the Rome Declaration – a document declaring the results of long weeks of informal negotiation. This document, while recalling that “Unity is both a necessity and our free choice”, also declared that “We will act together, at different paces and intensity where necessary, while moving in the same direction”, and then seems to let open the hot topic of Multi-Speed Europe where a group of states will go further in the integration. At the end of the day, however, the declaration felt like a watered-down text, maybe due to the fact that some actors, such as Poland and Greece, threatened not to sign this declaration few days before the celebration, otherwise perhaps because different countries of the European Union have different views for its future.

Then, it looks like the expected breakthrough was lacking. The necessary wake-up call – a message saying that the EU is fundamental, albeit it be a better EU; an EU that is efficient and capable of action when needed – was not sent by EU leaders, but by its people. Maybe it is time for a renewal of the European Union, this time not by an elite approach but a bottom-up one.

In any way, the European Union needs a new impetus to make an end to those difficult times. Strong actions must follow strong words. This being the only answer to the rise of nationalism, as showed by the counter-demonstrations on the very same day in Rome.

I am French. I live in Poland. But after this weekend I feel even more European. Yes, I marched in Rome, and yes, I believe in a strong future for the European Union.

Aurélien Pommier, EST Ambassador to Poland, graduated from the University of Lorraine (France) in Law and in Economics. He is currently studying European Politics at the Jagiellonian University.