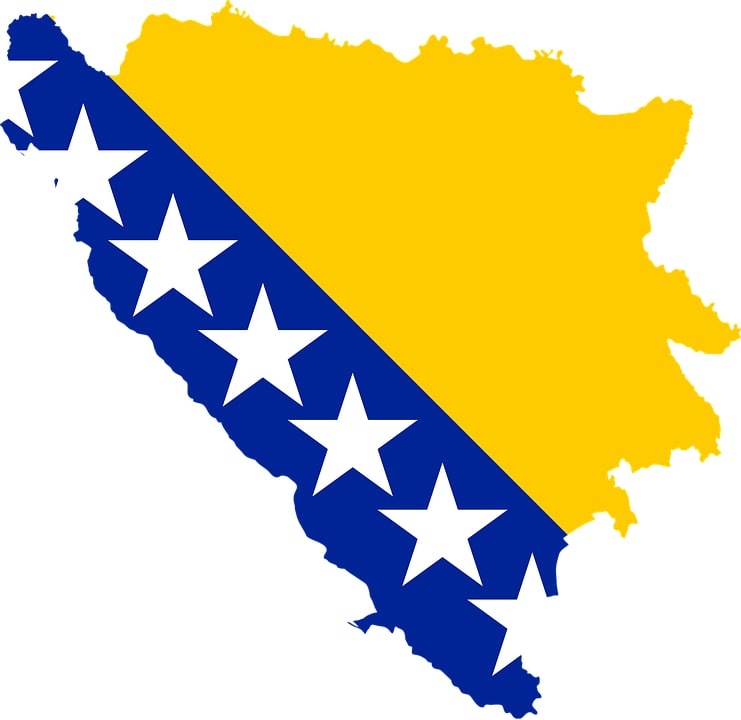 Bosnia and Herzegovina’s political system is quite complex and requires examination from its origins, particularly its constitution. The constitution of Bosnia and Herzegovina is historically important since it is unique in being created as part of a peace deal, it was not drafted and approved through the normal procedure of being proposed and discussed by Parliament, nor were people given a chance to express their opinion in a referendum. The constitution of Bosnia was signed as part of the Dayton Peace Agreement by Alija Izetbegović, President of the Republic of Bosnia and Herzegovina; Dr Franjo Tudžman, the President of Croatia and Slobodan Milošević, and the President of the Federal Republic of Yugoslavia, on November 21, 1995 and ratified on December 14, 1995.

The theoretical background of the constitution is tied to the consociational democratic model, introduced by Arend Lijphart (Lijphart, Consociational Democracy, 1969) .Therefore, the Bosnian political system should be examined through Lijphart´s four characteristics of consociational democracy. Firstly, a government should be led by a grand coalition of the political leaders of all significant segments of its plural society. This means that all relevant groups should be proportionally represented in the government. Eventually this became the case in the Parliamentary Assembly of Bosnia and Herzegovina, which is led by a coalition of representatives of all constitutive peoples in Bosnia. Secondly, the existence of mutual vetoes, whose main purpose is protection of vital national interests. As stated in the constitution of Bosnia and Herzegovina, each member of the Presidency and members of the Parliament´s Upper house have veto powers which can be used to block any decision that is identified as a threat to vital interest of the entity or group they represent. Thirdly, the principle of proportionality, meaning that groups are adequately represented in the executive, the legislative and judiciary branch of the government.In Bosnia, the Presidency, the Upper house of the Parliament, Council of Ministers and Constitutional court all have an equal number of representatives from each of the country’s ethnic groups. Finally, it grants autonomy, the right of self-government, to each group represented in the country. In Bosnian politics this self-governance is evident on the entity level of government, where the Federation of Bosnia and Herzegovina is mainly controlled by Bosniak’s and Bosnian Croats, while Republika Srpska is primarily governed by Bosnian Serbs (Lijphart, Democracy in Plural Societies: A Comparative Exploration, 1977) .

Accordingly, Bosnia and Herzegovina’s system is quite complex and troubled by a weak central state and strong entities. This bureaucratic structure of governance is extremely expensive to maintain, while at the same time leaving the Bosnian government relatively weak and poorly functioning. It could be argued that the Dayton Peace Agreement created a state where the political elites play a dominant factor in the legislative and executive branches of government such as the Presidency, Parliament and the Council of Ministers (Karic, 2016).

The fact that every single group represented in the institutions of Bosnia and Herzegovina has far reaching veto powers is one of the key problems facing Bosnia and Herzegovina today. In order for any decision to be passed in Bosnia, agreement of all three parties is required.  In practice, it has proven hard or in some cases outright impossible to reach an agreement among all three parties which has caused a great deal of instability, and economic stagnation in the country. Political unwillingness to take action, and implement or adopt legislation that should have been high priority innovations, has generally been defended through claims of “protecting the national interest”.

How did we arrive at the current state of affairs? In the Parliamentary Assembly of Bosnia and Herzegovina, and as previously mentioned particularly in the House of Peoples, all constitutionally recognised peoples are equally represented (five delegates from each group of constitutive peoples). This means that any decision or law can be blocked by a mere three delegates who consider it a threat to the vital national interest of the entity they represent. Due to the loose definition of “the vital national interest”, the veto is often misused and prevents both the progress and prosperity of Bosnia and Herzegovina. No Bosnian politician will ever say that his political party or delegates in the legislative branch of government are against the Euro-Atlantic integration or that they are blocking it, hence the situation is quite different. We cannot say that they are directly blocking the Euro-Atlantic integration but their usage of the veto power during the adoption of crucial laws and the establishment of the necessary committees indirectly prevent Bosnia from progressing further. Accordingly, Bosnia needs a clear and strict definition of the vital national interest in its constitution in order to clarify in which situations this veto right may be used, since the eventual problem of this veto power is not its existence, but its effect on the politics, structure and stability of Bosnia.

All Presidential decisions need to be reached through a consensus, although members of the presidency also have veto powers; yet their implementation goes differently. If this veto power is used by the Bosnian Serb´s member of presidency it needs to be confirmed by the majority in the Republika Srpska’s lower house of Parliament, namely the National Assembly. On the other hand, if this veto power is used by the Bosniak or Bosnian Croat member it needs majority approval in the Federation of Bosnia and Herzegovina´s Upper house of Parliament, particularly the House of Peoples.

The right to veto any decision at state and entity levels when the vital national interest of one of the constituent peoples comes into question enables each ethnic group to prevent any state attempts from violating their autonomy. However, the criticism directed towards the system of mutual veto rights is that it creates the possibility of “a minority tyranny”, because there are no minorities in the constitutional sense- all three segments are equally powerful constituencies (Karic, 2016).

This veto power is, in fact, one of the main reasons why Bosnia´s integration into the European Union has been stagnated for such a long period of time. The mechanism of coordination[1] was created in order to enhance the adoption of the Reform Agenda plan. By September 2016, Bosnia had managed to complete 40% of the whole Reform Agenda plan for 2016-2018[2]. Due to its complicated structure not all problems can be solved by the establishment of the Mechanism of coordination. Many issues are still sitting on the table and waiting to be addressed in the proper way, such as the implementation of the European Court of Human Rights’ final judgment on the Sejdić-Finci case (Claridge, 2010). The implementation of this judgment requires changing the Constitution of Bosnia and Herzegovina.

Taking into account that Bosnia and Herzegovina is a democratic country one would assume that changing the constitution would not be such an issue, but it is. When mentioning any reform, especially constitutional, it needs to be understood that individual entities’ veto powers play a significant role. So far, there have been a few attempts to change the Constitution, most notably the so-called April package from the 2006 constitutional reform initiative and 2009 Butmir process. These constitutional reforms included the indirect election of presidency though the Parliament and would eventually solve the Sejdić-Finci case. Even though the presidency was not guaranteed to go to a minority in these reforms, it remained sufficiently in keeping with the ruling of the European Court of Human Rights, as this does not require a guaranteed seat for any minorities, but merely the right to be able to be democratically elected as president; they cannot be excluded. Due to fact that these reforms would give the country’s entities (Federation of Bosnia and Herzegovina and Republika Srpska) a larger sphere of influence by transferring from the Parliamentary Assembly to the entities and by granting veto rights on proposals for presidential candidates in the Upper house of the Parliament – a number of Bosniak and Bosnian Croat representatives voted against these reforms, and they were not adopted.

It is disappointing that this year we have marked the 21st anniversary of Dayton Peace Agreement, and consequently also the 21st anniversary of the Constitution, with only a single amendment to Constitution concerning the Brčko District. In the past 21 years, the Constitution of Bosnia and Herzegovina has not experience any meaningful change, even though its creators expected it to be changed within just a few years after the war. Since Bosnia did not have a strong commitment from its politicians – they have not made as much effort as they could to help Bosnia and Herzegovina become stable and prosperous. For years Bosnia has been stagnating in the Euro-Atlantic process, far behind its neighbours in economic strength and overall prosperity. The Dayton constitution does not stop Bosnia´s politicians from adopting new laws and forming the committees that could help Bosnia. It is their prerogative, and they are misusing the power given to them by people and the Dayton Peace Agreement.

It is true that the Dayton Peace Agreement served its purpose; it ended the war and rebuilt the state, albeit in its current dysfunctional form. The international community has presented Bosnia with numerous proposals for change. Considering the fact that all of the international community’s proposals have failed to be implemented, they now first want to see some initiative from Bosnia and Herzegovina, upon which they will help them implement these proposals most effectively. There is a solution for the situation in which Bosnia and Herzegovina finds itself. However, there are certain preconditions that Bosnia will need to meet in order to move forward. First, there is an urgent demand for Bosnia to show political willingness, unity and commitment to change; secondly it is necessary for Bosnia to accept the importance of abolishing the nationalistic rhetoric that is widely spread among the political elites in Bosnia, and finally the commitment to a stable, prosperous, multi-ethnic and democratic Bosnia and Herzegovina must be reaffirmed. Hence, not all of the blame for the stagnation of Bosnia can be put on it’s politicians; there is a huge amount of responsibility on the shoulders of the citizens of Bosnia. Citizens are the ones who choose their representatives, apparently they chose according to their ideological preferences and views on the future of their country. Bosnian citizens need to stop thinking just locally; they need to recognise the importance of thinking about the state as a whole and must vote for those who will commit to working towards a prosperous, stable and united Bosnia and Herzegovina.

To all appearances, Bosnian citizens, as well as their politicians need to recognise the fact that change does not come overnight and must acknowledge that creating the foundation for the Mechanism of coordination, together with the quick adoption of the Reform Agenda, are the first steps towards creating a better Bosnia and Herzegovina.

[2] Reform Agenda set plan for socio-economic reforms of all levels of government, and is expressed in six areas of importance as follows: Public Finance, Taxation and Fiscal Sustainability; The Business Climate and Competitiveness; The Labour Market; Social Welfare and Pension Reform; Rule of Law and Good Governance; Public Administration Reform. Available at: http://europa.ba/wp-content/uploads/2015/09/Reform-Agenda-BiH.pdf.

Enna Zone Đonlić is a former EST Ambassador to Bosnia and Herzegovina and is a 2017-18 Senior Ambassador to the European Student Think Tank.