Changes in the European security environment stemming from Russia’s hybrid aggression against Ukraine and illegal annexation of Crimea (February-March 2014) forced the North Atlantic Treaty Organization (NATO) to face the return of power politics to the European continent for the first time since the end of the Cold War. Facing a disruptive actor aiming to undermine European stability, NATO reacted first by establishing the Assurance and Adaptation measures of the Readiness Action Plan (RAP), thus guaranteeing the utmost commitment to the alliance members’ security. If this first instinctive reaction is characteristic of NATO, satisfying the need for an increased military deterrence, three peculiar features of the hybrid threat pushed NATO to consider how a purely military reaction was unfit. First, the complex set of tools and strategic flexibility needed to face hybrid threats. Second, the increasingly blurred lines not only between continental and domestic defence and security but more importantly between military and civilian. Third, the ability of these threats to elude the Article 5 threshold and to be untraceable. To effectively counter hybrid threats, significant (military) retaliation cannot be the sole answer. How did NATO then answer this dilemma? What progress has been made since the 2014 NATO Wales Summit that followed Russia’s actions in Crimea and Ukraine?

As per NATO definition, hybrid warfare currently presents itself as:

“the use of asymmetrical tactics to probe for and exploit weaknesses via non-military means (such as political, informational, and economic intimidation and manipulation) and are backed by the threat of conventional and unconventional military means” (NATO, 2015).

With the main goal being to polarize and destabilize a society, multi-layered and clandestine efforts are implemented to avoid attribution or retribution (Pindják, 2015). Whether these types of threats can be successfully countered with traditional military means is NATO’s main challenge. A larger set of tools is needed to counter the irregularity of these threats. Therefore “the Alliance will need to strengthen its cooperation with international organizations, particularly with the EU” (NATO, 2017). Threats such as disinformation campaigns and cyber-attacks make the separation of duties between the EU and NATO no longer viable, with the former focusing on civilian and internal security and the latter on military and international issues. Cyber-attacks could, for example, target critical civilian and military infrastructure, thus leading to the disruption of systems of communication and defence, leaving a country unable to defend itself. The measures to face such a scenario need to be multi-layered as well.

The 2015 NATO report on hybrid warfare underlined how through “the successful use of modern technologies” and spread of “propaganda and distorting facts Russia is able to construct alternative narratives and realities in cyberspace and on the ground” (NATO, 2015). The new tactics used by Russia, coupled with the more traditional military means, multiplied the force of the conflict. Post-Crimea NATO’s first step was to implement the RAP, which was defined by NATO Secretary General Jens Stoltenberg as the “biggest reinforcement of our collective defence since the end of the Cold War” in a joint press point with Estonian Prime Minister Taavi Rõivas (NATO, 2014b). The “All for one and one for all” message implied NATO’s willingness to stand by its members with full force in case of an attack (NATO, 2014b). The message was strong and delivered on NATO military defence and deterrence capabilities. Importantly, these measures were associated, in the Wales Summit Communiqué, with a recommendation to develop tactics and reviewing theories to face hybrid warfare.

From Wales to Brussels

In Warsaw, two years after the Wales summit, NATO strongly underlined again its rejection of the “ongoing illegal and illegitimate annexation of Crimea… [and] the deliberate destabilisation of eastern Ukraine”, labeling Russia as a “a source of regional instability” (NATO, 2016a). This premise was followed by further hard-power steps. Alongside the RAP measures, NATO established the Enhanced Forward Presence (EFP) in order to increase NATO’s deterrence and defence posture. Four battalion-sized battlegroups (about 4,500 personnel and a total of sixteen members participating in the effort) were thus deployed in Estonia, Latvia, Lithuania, and Poland, with the United Kingdom, Canada, Germany, and United States respectively responsible for leading a battalion (Kühn, 2018). The slight change in focus on deterrence and defence was coupled with invitations to Russia for a fair dialogue, in part due to the risk of escalation felt deeply in the Baltics states and Eastern Europe. At Warsaw though, next to these hard-power measures, with a joint declaration, NATO and the EU defined their complementary relationship and thus began to back up military capabilities with a more nuanced approach. Both organizations pledged to “boost our ability to counter hybrid threats, including by bolstering resilience, working together on analysis, prevention, and early detection, through timely information sharing and, to the extent possible, intelligence sharing between staffs; and cooperating on strategic communication and response. The development of coordinated procedures through our respective playbooks will substantially contribute to implementing our efforts” (EU-NATO, 2016a). This pledge took into account hybrid warfare’s multitude of faces and the utmost need to outline a nuanced approach that exploits both hard and soft power capabilities.

As the hybrid challenge unfolded, calls for greater EU self-reliance in such a volatile environment resulted in the 2016 EU Global Strategy (EUGS). This strategic document introduced an EU fully confident of its ability to act independently on the international stage and capability to guarantee security for its member-states (EEAS, 2016). The “strategic autonomy” envisioned by the EUGS though does not translate into a ‘one-man job’ approach. Cooperation with NATO is deemed fundamental, as it is considered the “the strongest and most effective military alliance in the world” (EEAS, 2016). The combination of soft power and ability to connect with civilian entities makes the EU the complimentary partner to NATO’s hard power and Atlantic reach. As the strategy underlines, the keyword is complementarity between a different set of capabilities and approaches fit to understand and face the hybrid challenge. Indeed, the new cooperation between the two organizations builds upon a similar threat perception: Russia’s aggressiveness and the recognition of the importance of their mixed and complementary set of skills in providing comprehensive security for the continent.

The cooperative trend that started between the two organizations at the Wales summit in 2014 as an undefined idea due to the recentness of the events that led to its inception, progressed up through the 2016 Warsaw and 2018 Brussels summit. The areas of cooperation outlined at Warsaw were actualized in a set of 42 proposals in a joint EU-NATO statement in December 2016 (NATO, 2016b) and expanded upon by a new set of common proposals the following year (NATO, 2017). The first point of order is countering hybrid threats. Currently, 20 out of the 74 proposals address the hybrid challenge, receiving greater focus than any other threat (NATO, 2017). The exchange of information on NATO’s requirements for domestic resilience, integration into NATO’s Defence Planning Processes, consultation on strategic communication, resilience workshops on protecting critical infrastructure, and the establishment of the European Centre of Excellence for Countering Hybrid Threats in Helsinki all aimed to address the hybrid challenge. The new 2017 measures also centered on situational awareness, strategic communication, and the bolstering of resilience (NATO,2017). In this regard, if cooperation is to develop and the proposed measures positively implemented, intensification of engagement between staff and examining opportunities to share more information will be a top priority. Planned exercises for the synchronisation of the two organizations’ crisis response activities, in particular in a hybrid context and the development of a mutual understanding around hybrid crisis management are central in guaranteeing as speedy of a response as possible. As the 2018 Brussel’s Summit Communique underlined, these proposals are now due for concrete implementation.

While the political tensions over defence spending overshadowed the 2018 Brussels Summit, it was nonetheless significant in underlining the importance of NATO-EU cooperation. The joint EU-NATO declaration set the next goal: focusing on the actual implementation of proposals, not on their extension. With regards to the hybrid scenario, they underlined that “we have increased our ability to respond to hybrid threats: we reinforce our preparedness for crises, we exchange timely information including on cyber-attacks, we confront disinformation, we build the resilience of our members and partners and we test our respective procedures through parallel and coordinated exercises” (NATO, 2018b).

These joint efforts with the EU, combined with NATO’s pledge to invoke Article 5 of the Washington Treaty in case of hybrid attacks and to establish Counter Hybrid Support Teams to “provide tailored, targeted assistance to Allies, upon their request, in preparing for and responding to hybrid activities” (NATO, 2018a) need to be followed up by the establishment of institutional frameworks of coordination, which remain the main challenge. Their development would indeed avoid time-consuming procedures of consultation if a playbook was ready to follow. More concrete coordination between the two organizations would speed up the reaction to a potential hybrid threat, which is now understood as to be timely difficult when it comes to the protection of the member states and challenging in the approaches needed to counter it. The main challenge still remains working together and finding a unique strategy able to deliver a united strategic message. Joint institutional frameworks to face hybrid threats coming from Russia and other actors would not only reinforce the implementation of proposals but also depict a united European front whose shortcomings adversaries would find harder to exploit.

Angelica Puntel holds a bachelor’s degree in International and Diplomatic Sciences from the University of Trieste, (ITA). Within the programme she focused on International Relations theory and  history and delved into the reality of these theories when she participated in a winter school in Morocco, with the IAPSS, that addressed the political future of the MENA region after the uprisings.

Later, she got her Master of Science in International Relations from the University of Glasgow where she could deepen the application of IR theory on diverse political issues: her main interest lies in EU’s foreign policy, in its security and defense strategies, and in the evolution of its role as a security provider. Indeed, she wrote her dissertation on the development of the EU’s strategic culture and on the influence that such a concept has on the relationship between EU and NATO.

Within the EST Working Group Security and Defense, she is focusing on the relationship between EU and NATO and on the theoretical debate around the existence and power of strategic culture. Currently, she is a Junior Research Fellow at the Centre for Geopolitics and Security in Realism Studies (UK) where she focuses on security and defense issues regarding the EU and the Brexit agenda.

Kühn, U., (2018) Preventing Escalation in the Baltics: A NATO Playbook. Carnegie Endowment for International Peace.

NATO, (2014a), Wales Summit Declaration Issued by the Heads of State and Government participating in the meeting of the North Atlantic Council in Wales, https://www.nato.int/cps/ic/natohq/official_texts_112964.htm, last accessed 1/11/2018

NATO, (2016a), Warsaw Summit Communiqué Issued by the Heads of State and Government participating in the meeting of the North Atlantic Council in Warsaw 8-9 July 2016, https://www.nato.int/cps/en/natohq/official_texts_133169.htm, last accessed 1/11/2018 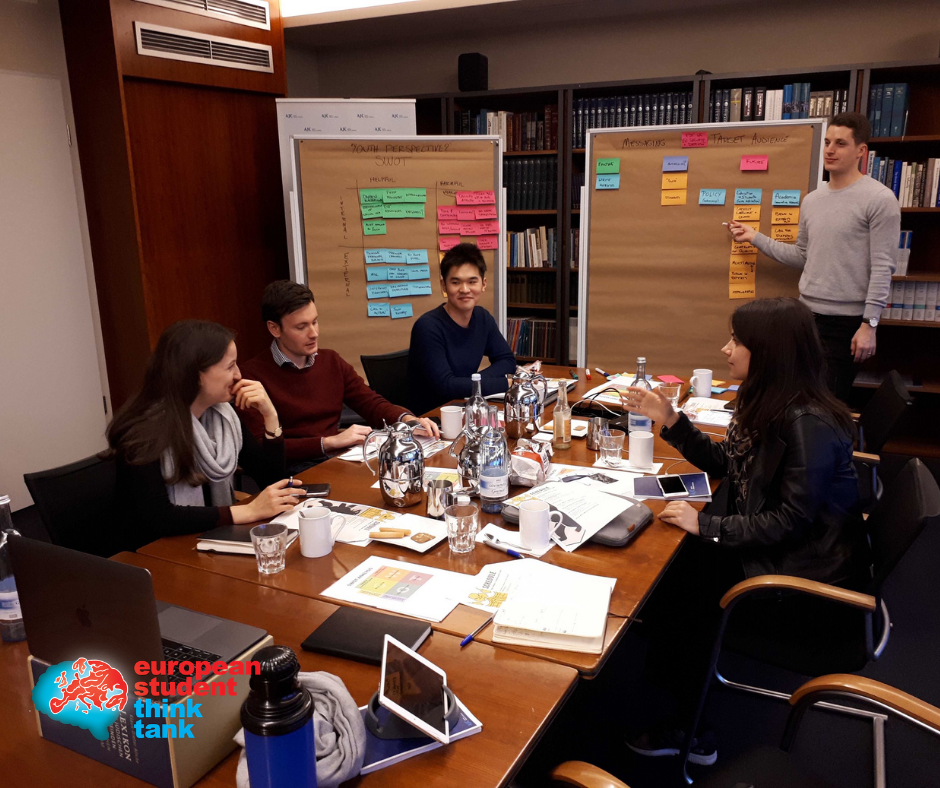 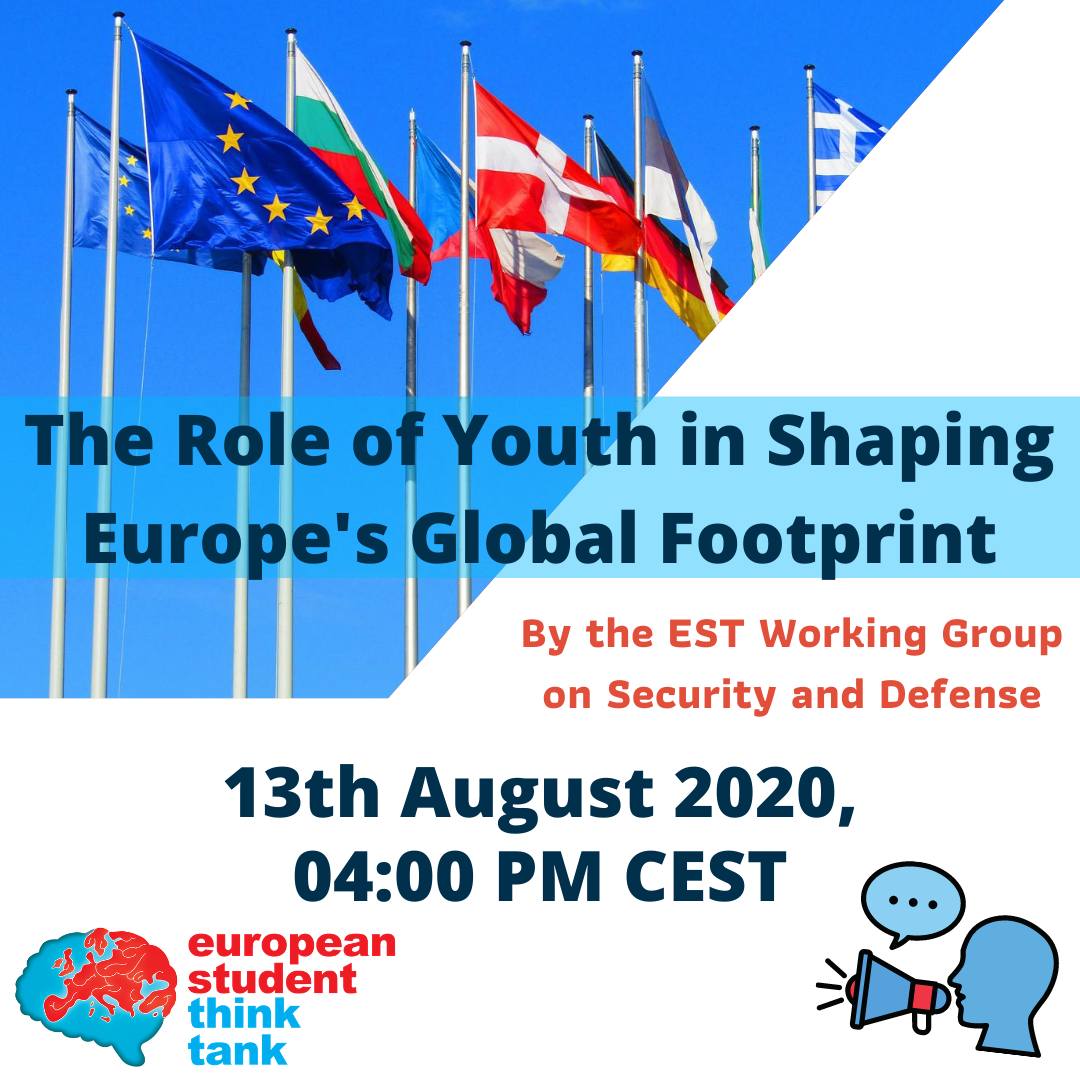 Webinar: The Role of Youth in Shaping Europe’s Global Footprint 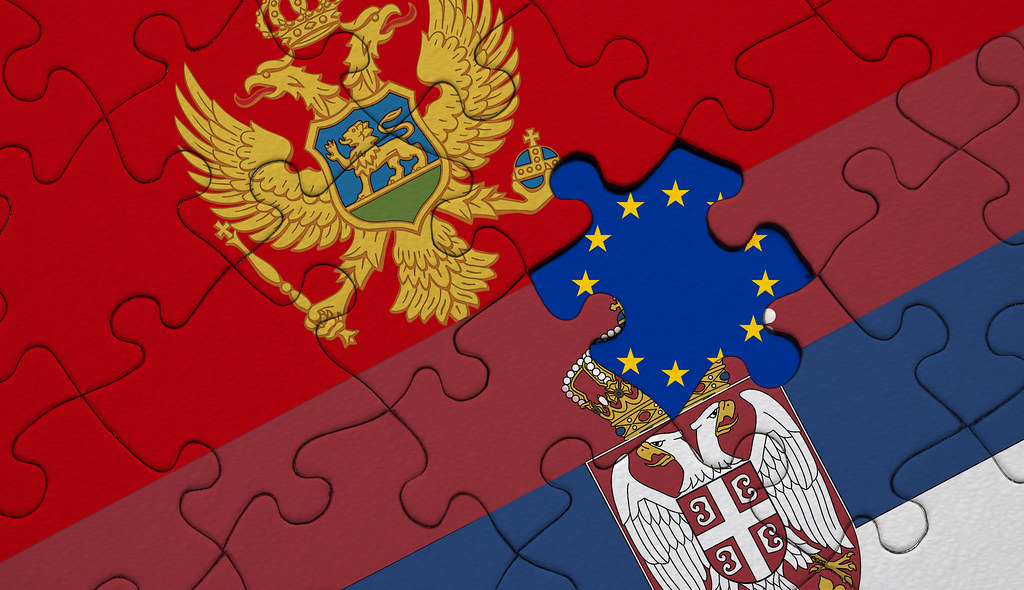 Written by the Angelica Puntel (Working Group on Security and...