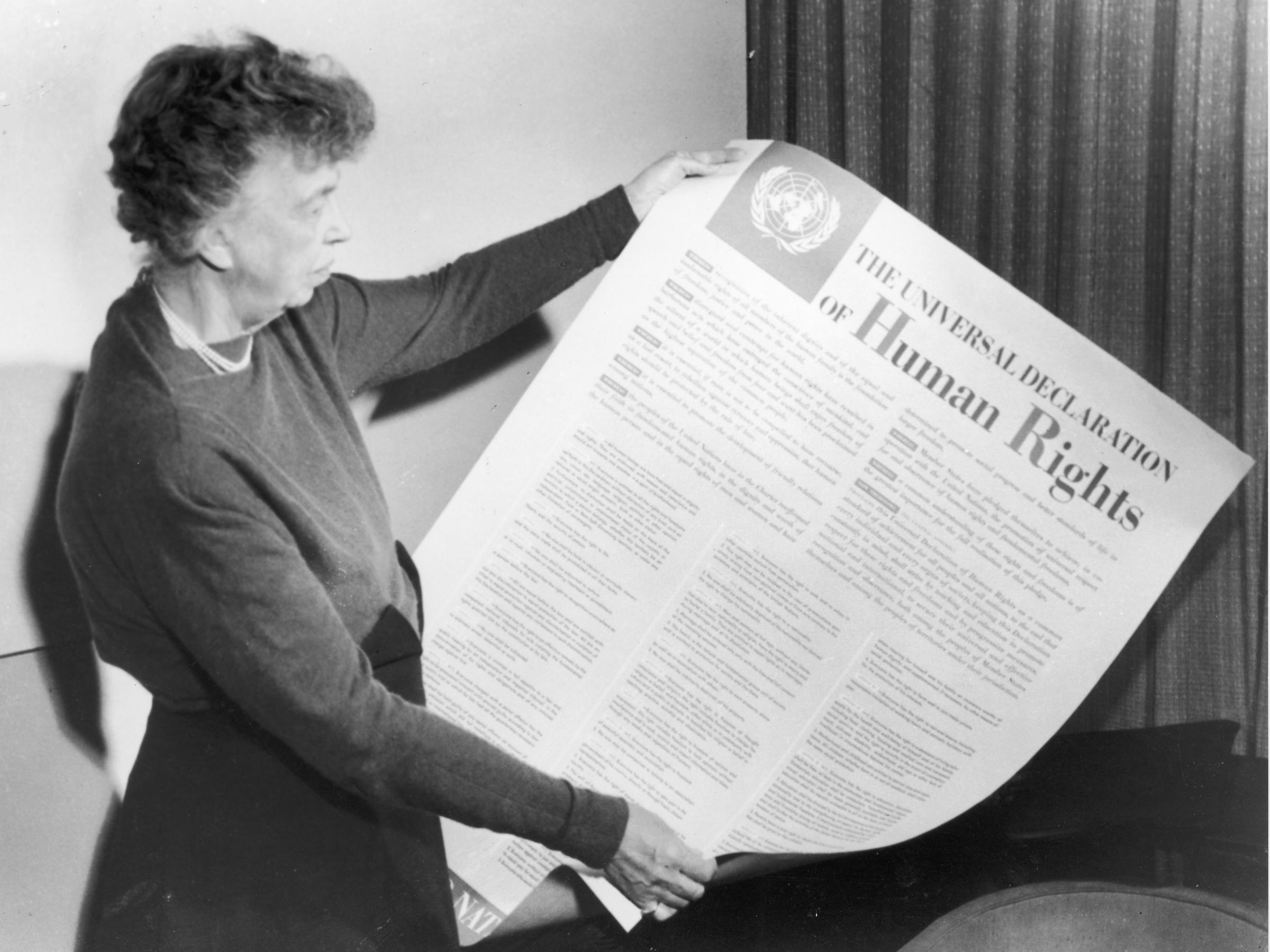 “You are destined for a Great Monday!

The long-awaited triumph versus the burden of history: the first sentence of Kafka’s aphorism captures the utopian hope of many modern human rights visionaries, envisioning “an ideal world,” where “rights would remain both out of sight and out of mind […] a world of saints,” where “rights would be widely respected, rarely asserted, and almost never enforced.” (Donnelly, 2013, pp. 9-10). It expresses a conviction that their cause will ultimately, inevitably, prevail. A conviction that: “The arc of the moral universe […] bends towards justice.” (King, 1958).

The second sentence of the aphorism acknowledges the value of this moral vision, but it also questions the accuracy of its whiggish interpretation of the trajectory of human rights in history. It retorts that the Great Monday will never arrive since the everlasting Sunday will continue asserting itself perpetually. Yesterday lasts forever; there is no final absolution, no end to history. This vision sees the past as “little more than the register of the crimes, follies, and misfortunes of mankind” (Gibbon, 1776), and asserts that we will never be able to transcend this endless accumulation of atrocities. Hence, human rights will remain indispensable. To paraphrase Dag Hammarskjöld’s observation on the purpose of the UN: human rights were in this perspective not created in order to bring us to heaven but in order to save us from hell (Hammarskjöld, 1954).

These are troubling times for human rights: the quality of democracy and the rule of law has deteriorated in many recently democratized states in the Americas, South Asia, Africa, and Eastern-Central Europe. China and Russia remain authoritarian and have developed new mechanisms for surveillance and repression that they also export abroad (Mozur, Kessel & Chan, 2019). International human rights norms and institutions are challenged from both within and outside the movement: by legal scholars, nationalists, realists, critical-school theorists, feminists, and post-colonialists alike (Brysk, 2018, pp. 2). In their systematic review of more than 250 of the most cited books, articles and blog posts published in academic journals like Human Rights Quarterly, as well as journals popular among practitioners like the Journal of Human Rights Practice, and openGlobalRights, Rodriguez-Garavito & McAdams (2016) identifies 6 categories of criticism leveled at human rights as a doctrine, movement, and set of institutions:

Even some supporters advocate for moderation and restraint, arguing that the “unrealistic expansion” of human rights as a universal solution to an ever-increasing set of social problems undermines the legitimacy and efficacy of human rights law (Hannum, 2019, pp. 3-5), while others assert than an expansive issue-agenda and inclusion of new groups is precisely the correct path forward (Brysk, 2018, pp. 8-9). This onslaught of criticism has caused a widespread sense of uncertainty in the human rights movement according to Rodriguez-Garavito and McAdams (2016). In times of uncertainty and crisis, a preoccupation with, and recourse to, history often becomes popular. But can the past really provide us with the answers we need to address the challenges facing the human rights movement today?

Since the discipline of human rights historiography emerged in the 1990s, scholars have been concerned with the normative foundations of universality proclaimed by the Universal Declaration of Human Rights (UDHR); the contributions of delegates from the Global South in drafting the declaration (Waltz, 2001; Glendon, 2003); to what degree Great Power politics has shaped the doctrine and institutions of the human rights movement in the post-WWII era (Mazower, 2004); the origins of a human rights doctrine based on internationalism, individual rights and universal jurisdiction (Weitz, 2008; Burgers, 1992); the status of the Holocaust as a catalyzing force behind the UDHR and the ECHR (Duranti, 2012), and much more. Received wisdom traces the breakthrough of the modern human rights regime to a series of statements, declarations, conferences and conventions in the 1940s: FDR’s 1941 State of the Union Address; the Atlantic Charter issued later the same year; the 1942 Declaration by the United Nations; the Dumbarton Oaks Conferences 1944, The San Francisco Conference 1945; and the UN Human Rights Commission drafting the Universal Declaration between 1947-1948 (Moyn, 2010, pp. 44-48). But this is, of course, only a schematic account, and it involves various qualifications and reservations.

Some scholars, like Mazower and Moyn, assert that the post-war human rights regime was deliberately designed to curtail effective enforcement and implementation mechanisms and keep national sovereignty intact (Mazower, 2004, pp. 395-396). This perspective emphasises the role of Western Great Powers – especially the US and colonial powers like GB – in forging post-war institutions and drafting the UDHR and subsequent conventions under UN auspices, also resulting in a strong bias toward individual physical integrity-and-civil and political rights (Moyn, 2010, pp. 70-71). Others, like Waltz, Burgers, and Glendon, either emphasize the contributions of minor powers and states from the Global South (Waltz, 2001, pp. 49; Glendon, 2003, pp. 27-28) or subnational entities like NGO’s and specific individuals (Burgers, 1992, pp. 450-452; 475-476). These scholars argue that the foundational role played by the US is overstated and that the contributions of delegates from Latin America – like Hernán Santa Cruz from Chile and Minerva Bernardino from Dominican Republic – religious civil society organisations, and European lawyer-diplomats in the interwar era – like Andrei Mandelstam and Antoine Frangulis – was far more consequential in building the foundations for the post-war human rights regime.

By highlighting the diversity of actors involved in the process, and their contributions – inclusion of communitarian provisions (Glendon, 2003, pp. 32-33); emphasis on gender-neutrality, nondiscrimination and equality (Waltz, 2002, pp. 444); economic and social rights (Ibid, pp. 444-446): insistence on legal rather than merely declaratory rights, enforceable by courts with international jurisdiction (Burgers, 1992, pp. 452-453); and the right to individual and collective petition (Ibid, pp. 473) – these scholars retort that the post-war human rights regime is not – and has never been – some sort of western neo-imperialist scheme. The UDHR is, according to them, a highly collaborative and negotiated document: between 1946-1948, a drafting committee of eight states, and then the 18-member UN Human Rights Commission composed of delegates from Chile, Uruguay, Panama, Australia, Belgium, China, Egypt, France, India, Iran, Lebanon, the Philippines, the UK, the US, Belarus, the Soviet Union, Ukraine, and Yugoslavia, discussed, debated and amended the text. In 1948, the final draft was referred to UNGA’s Third Committee where it was reviewed for 2 months by delegates, and where “some 168 amendments were proposed and debated. Finally, the text was referred to the General Assembly for another round of oratory and debate, and amendment, before a final vote. On 10 December 1948 it was adopted without a single dissenting vote” (Waltz, 2002, pp.441-442).

The concern with the history of human rights can serve positive causes: it might be used to highlight neglected or overlooked contributions; to dispel myths about e.g auteurship (i.e “ownership” of the HR idea); to examine the foundations of the post-war human rights regime and ascertain the intentions of its founders. But historical accounts can also use selective contributions to justify idiosyncratic interpretations. As the historiographic field of human rights has advanced, surprising connections have been uncovered, and the actors involved in the birth of the modern human rights project have multiplied: everybody now wants a retrospective seat at the drafting table. The past can be used to justify present or future changes: take Glendon, for example, who in her historical scholarship on the history of human rights adopts a subtle, but distinct activist position. She “reclaims” the historical contributions of Latin American states in drafting the UDHR (and the HR-idea in general) and wishes to recover the communitarian-catholic spirit of these contributions with the express purpose of “course correcting” the human rights movement – which in her view has become too narrowly individualistic and libertarian – by returning to “the forgotten crucible” of the human rights idea and infusing the movement with the spirit of its founders (Glendon, 2003, pp. 39). Recourse to history in the hope of recovering the “true” meaning, purpose, or scope of human rights will unlikely yield helpful answers. As banal as it is: the conflation of minimalist and maximalist conceptions of human rights; “human rights as catastrophe prevention and human rights as utopian politics” (Moyn, 2010, pp. 226) might be less a result of inflated ambitions distorting an originally modest idea, and more of confusing the aims and ambitions of governments vs. civil society actors.

Weitz, E D. (2008). “From the Vienna to the Paris System: International Politics and the Entangled Histories of Human Rights, Forced Deportations, and Civilizing Missions.” The American Historical Review, 113(5). pp. 1313-1343.