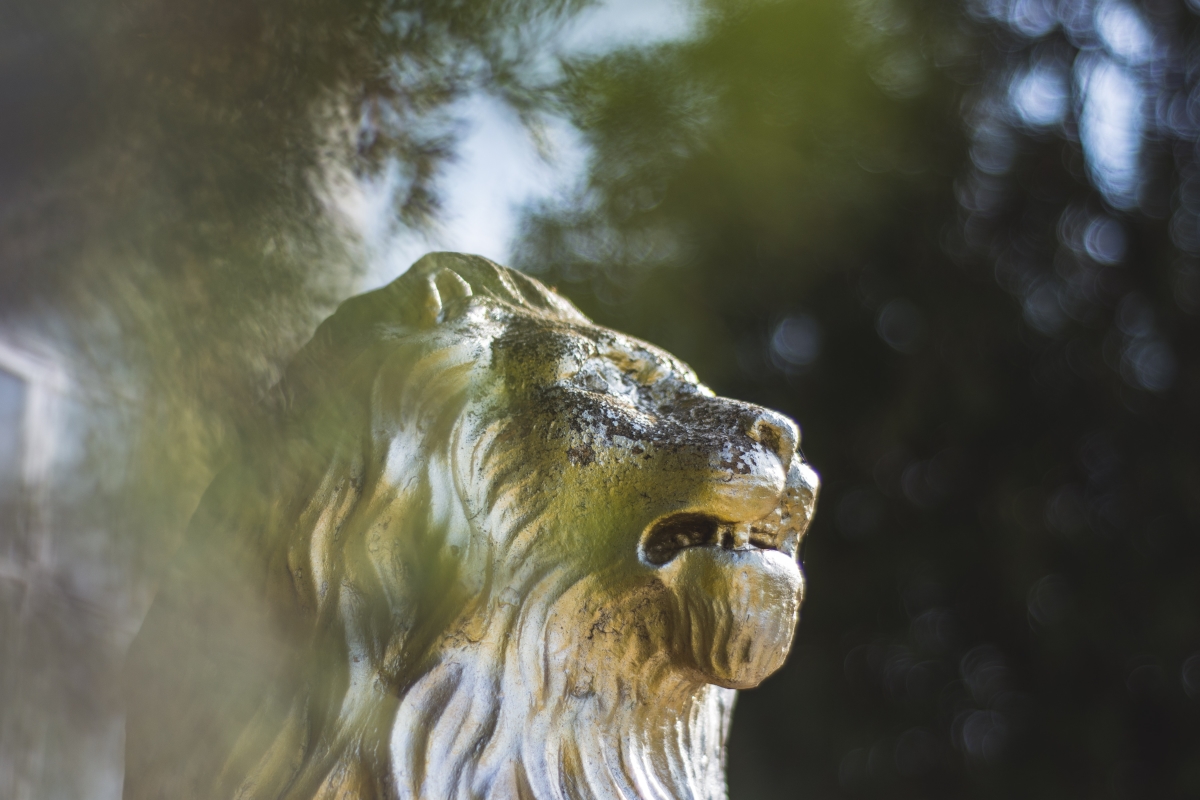 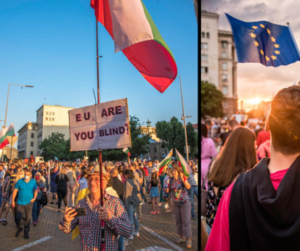 A protester holding a sign ‘EU are you blind?’ during an anti-governmental protest in Sofia –   Copyright/ Photo by Sketches of Sofia

Overview of the recent protests

For weeks Bulgaria has been engulfed in fierce protests fuelled by the accumulated frustration and hopelessness over the government’s inability to bring an end to widespread corruption. “Corruption and the justice deficit is a terminal issue,” says Dimitar Bechev, a senior fellow at the Atlantic Council. The dissent began in early June when photos of the Bulgarian Prime Minister Boyko Borissov were leaked online, showing him asleep in his bed next to a drawer filled with 500 euro bills and a handgun. The photos sparked controversy that stirred  political arena but they were not enough to cause civic unrest. At the time this was seen simply as another political scandal, which Bulgarian people are already used to. The leaked photos were coupled with anonymously posted audio recordings of Borissov allegedly talking about ‘burning’ a MEP and covering up misappropriation of European Union (EU) funds. Thus far, there has been no state investigation in any of the materials, despite independent media confirming their authenticity.

The accusations led to a fierce political standoff between the institution of the Parliament, in the face of Boyko Borissov, and the President of the Republic of Bulgaria – Rumen Radev. Borissov diverted the attention by stating that these materials were being used by his political rivals (primarily the President) to discredit him and to stop crucial policy initiatives.

On the 7th of July commotion at a publicly owned stretch on the coast of Black Sea triggered more outrage. The beach hosts a large property owned by Ahmed Dogan, the Honorary Chairman of the Movement for Rights and Freedom (DPS). According to investigations by the independent media outlet ‘Bivol’, between 2016 and 2018, a two hundred meter pier was built illegally as part of the property of Dogan, but later legalized on the false grounds that it existed since the 1980s. In July this year, Hristo Ivanov, former Minister of Justice and current leader of the party ‘Yes, Bulgaria’, stormed the public beach, demanding access, but was violently pushed away by state security agents. As a result, the Bulgarian people saw the blatant attack against him as another example of corruption and  primacy in interest of political and business elites over justice.

Later, tensions were exacerbated by a raid on the institution of the President, where two members of his office were accused by the Chief Public Prosecutor Ivan Geshev – one for disseminating state secrets and the latter for criminal complicity with an influential businessman. Political analysts in Bulgaria suspect that the State Prosecutor is a figure close the Prime Minister, especially considering that the raid occurred the day after the President voiced his condemnation of Borissov’s cabinet due to the leaked materials and the legality of the raid itself. The arrests intensified people’s demands for a permanent end to corruption. Demands that eventually led people taking to the streets to protest.

The Prime Minister refused to resign and instead announced the substitution of five of his Ministers as an attempt to appease critics and opposition. Despite this, protests continued and in critical times, Borissov has been largely absent from Parliament debates, which has been met with criticism and understood as ignorance towards the state of the country. Currently, protesters have set up tents, blocking a major road in the centre of the capital, and have stated that they will not leave until they receive the resignations of the Prime Minister and the State Prosecutor. At this time, it is unlikely that the dissent will subside. According to a Gallup poll, 59 % of Bulgarians support the protesters and their demands, but 58 % are sceptical that the political elites will meet any of their requests. On the other hand, 54 % state that they do not want new elections, mainly because they believe that there is no viable political alternative to the current government. This comes to prove how deeply distrustful Bulgarians are that the current, or any other government, will be able to put their interests first.

When a state is completely entrapped by private interests

The protests highlighted Bulgaria’s longstanding problem not only with corruption, but also state capture. State capture is considered a severe form of corruption where the aim is to secure long-term privileges by exploiting the power of the government for private interests. Examples of state capture include laws or regulations which ensure market advantage to individuals; political corruption influencing the legislative or judiciary branches; judiciary corruption to ensure exemption from prosecution; buying civil servants and many more. This proves state capture to be a corroding form of corruption. It slowly undermines the neutrality and legitimacy of democratic institutions and creates favourable circumstances for the flourishing of more corruption.

‘State capture is virtual privatization of the state or rather privatisation of certain state functions.’

Many expert research centres have created roadmaps and methods for identifying state capture practices, which can be extremely useful in battling this issue. One example is the State capture assessment diagnostics (SCAD) instrument developed by the Center for the Study of Democracy (CSD) in Bulgaria. The instrument shows that certain institutional enablers (ex. dysfunctional institutions), together with environmental enablers (lack of media freedom or administrative and judiciary corruption) can serve to amplify the process of state capture by allowing actors to more easily gain access to power and receive benefits. As a result, a corrupt judiciary, biased institutions, and manipulated branches of government cannot lead an effective battle against corruption.

According to an analysis by the CSD, ‘Bulgaria must deal with the ineffectiveness of anticorruption policies, judiciary capture (which is a serious barrier to the former) and media capture (which also further facilitates other forms of capture).’ Moreover, the country scores dangerously high (above 50 of 100) on these three elements, which, according to the CSD, requires immediate policy interventions. However, Bulgaria hasn’t been able to seriously deal with corruption and remains the most corrupt in the EU, even dropping one point since last year, according to Transparency International.

This proves that the current protests are based on deeper set problems than a simple disfavour with the current political elite, but rather a complete intolerance of the corrupt system, to which Bulgarian citizens have borne witness over the past 30 years.

In June 2020, Eurostat published a special Eurobarometer on Corruption, this showed that 80 % of Bulgarians believe corruption is widespread and 51 % believe it increased in the past three years. Similarly, more than 80% believe that: bribery is the easiest way to receive public services and the only way to succeed in business is to have political ties. In terms of fighting corruption, only 17 % of Bulgarians (lowest in the EU) agree that effective measures against corruption exist in the country and refrain from reporting corrupt practices because they believe that the person responsible will not be punished.

Eurobarometer shows a devastating trend. Not only is corruption in Bulgaria normalised and the government completely unsuccessful in diminishing it, but people see themselves as both victims of corruption and incapable of changing anything.

In light of what we unearthed about corruption in Bulgaria, this sentence becomes more than just a protest slogan. Bulgarians sincerely hoped that joining the European Community would liberate them form their communist past and bring society closer to the prosperity and welfare levels of Western European states. Despite being part of the EU since 2007, this hasn’t happened yet. To show their dissatisfaction with the role of the EU, on the 19th day of the demonstrations, people took the protests to the European Commission building and demanded awareness and resolution of their social concerns.

However, the reaction of the EU was disproportionate and insensitive to the severity of the protests and the hardship of the people. The leader of the European People’s Party (EPP), Manfred Weber, stated that ‘the EPP Group fully supports the Bulgarian government of Boyko Borisov and its efforts to protect the economy against the negative effects of the Coronacrisis, fight against corruption and the progress that is being made to join the Eurozone’.

This approach is also consistent in the EU’s formal actions. When Bulgaria and Romania joined the EU in 2007, one of the conditions of accession was the ‘Cooperation and Verification Mechanisms’ (CVM), which was supposed to assist the states in their progress towards judicial reform, the fight against corruption and, (for Bulgaria only) organised crime This was done by setting up ‘benchmarks’, which Bulgaria was required to implement and then assessed based on that. Recently, the EU Commission stated that Bulgaria has made sufficient progress on implementing the benchmarks and that there will soon be a debate for terminating the CVM. This provoked serious controversy in Bulgaria, having in mind that the reality is much different. This concern was echoed by a letter from the MEDEL, a European association of judges and prosecutors, sent to Jean-Claude Juncker and Vera Jourová, in which they express their firm belief that the conclusions of the CVM do not match the reality of the countries at all.

When EU policy is being implemented, a key criterion to judge the extent to which it leads to actual change in society. This means that the widespread corruption and state capture represent serious evidence of failure to meet expectations. Moreover, a recent academic article on the topic, shows that most experts and researchers consider the CVM ineffective. The analysis made several conclusions. Firstly, Romania was much more successful than Bulgaria in implementation, this is because they were able to build independent anti-corruption institutions. Something that would be extremely difficult in Bulgaria considering the conditions of state capture. Secondly, the mechanism has sufficient shortcomings not just in design, but also in the fact that it can’t apply sanctions, thus a barrier to implementing the recommendations. Lastly, a main reasons for the failure of the CVM in Bulgaria is the lack of unbiased and independent institutions and the rule of law. This means that the CVM is not a powerful enough policy tool to fight the severe corruption and pervasive governance flaws in Bulgaria.

I believe that the current protests will not subside, and even if they do, they will not eliminate the other issues. Every few years, Bulgarians rush to the streets in hope of change but, so far, we have seen the same corrupt political and business system take over. This is an issue requiring bold domestic reforms and much stronger engagement and support from the EU Institutions. We are in dire need of stricter implementation of EU legislation and principles, but more importantly, greater attention on protecting the interest of the citizens of the Union.