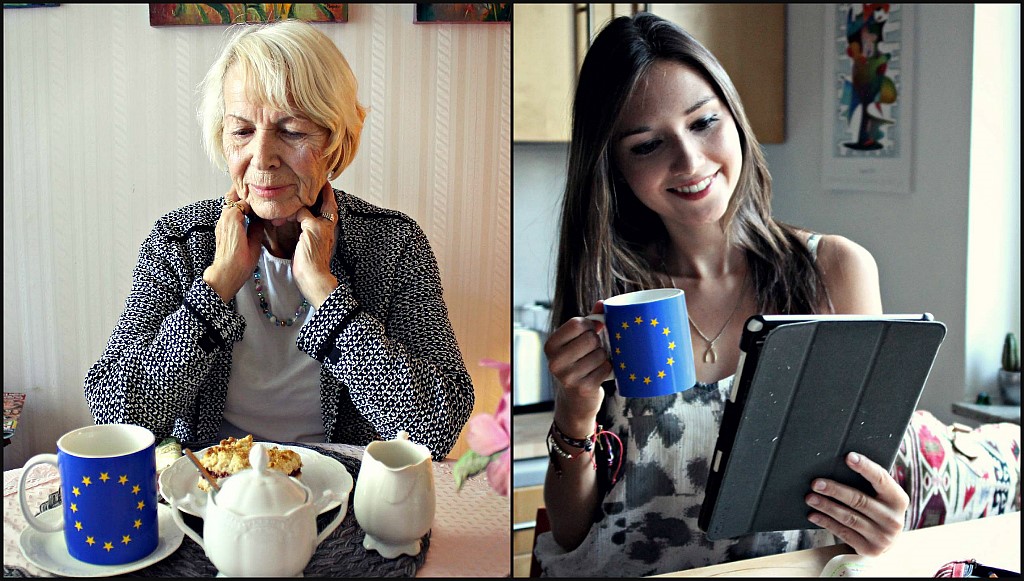 The result of the Brexit referendum made it crystal clear: Whilst the majority of young people voted for Britain to remain in the EU, the majority of older people decided to withdrawal. Many young Brits expressed their outrage on social media. Among others, the hashtag #NotInOurName had great popularity. In the UK the notion “the younger, the more pro-European” seems to apply. But is this also the case in other EU-member states?

To recognize if someone is open towards the EU, an obviously revealing indicator is the voting behaviour. Therefore, the voters of Eurosceptic parties are analysed by age group to determine if a generation gap exists between young and old. Germany, France and Italy are selected as representative examples, as those three countries have a great impact on the future of the EU due to their geographical- and population size, and their economic strength. They are also now seen as the new “Big Three” after the decision of the UK to leave the EU. The age group 18-24 was considered as the “young generation”, while the age group of 60+ was taken as “old generation.” In the case of Italy – due to a different measurement scale – the age group of 18-29 were ranked as “young generation” while the group of 55+ was classified as “old generation.”

In Germany the AfD is synonymous with Euroscepticism. Although the AFD does not promote an exit of Germany from the EU, the party wants less EU influence and more state sovereignty. In the most recent elections in Germany, the state elections 2016, the AFD gained votes. However, the older portion of the electorate did not make up the largest electorate of the AfD. Amongst the old generation, only 14% gave their vote to the Eurosceptic party. Among the young generation a higher share voted for the AfD (17%). The formula “the younger, the more pro-European” does not seem to work here. Rather, it appears to be a conflict in voting patterns by gender and education. An average of 21% of men and 14% of women voted for the AFD. Likewise, the level of education made a difference: Voters with a low level of education were more likely to vote for the AFD than voters with a higher educational level.

The President of the National Front, Marine Le Pen, promised in the case that she would be elected as the next French President that she would arrange a referendum regarding French withdrawal of the EU. Thus, one can consider the FN as currently the most EU-sceptical party. The regional elections in 2015 were the last important elections. The National Front attained a 27 % share of the vote, more than the AfD in Germany. But even in France the formula of the young pro-Europeans does not apply – the opposite seems to be the case. In the first round of the regional elections, 35% of the young generation gave the FN their votes, among the old generation 20% did so. As in the state elections in Germany, more men than women voted for the Eurosceptic party in question. Furthermore, the type of education plays an important role in France as well: among the voters with a low level of education (a maximum of a High School degree) 68% voted for the FN while among citizens with higher education only 37% did.

In Italy there is also a Eurosceptic party that is currently gaining votes: the Five Star Movement led by Beppe Grillo. In the party, however, there are conflicting opinions on the EU. On the one hand, the party program aims to adapt the Italian standards to the European ones. On the other hand, the party promotes an exit of Italy from the Monetary Union. At the local and regional elections in 2016, the EU-sceptic party could achieve great success. In Rome, Five Star’s Virgina Raggi was elected as the first female mayor in the city’s history. A survey from the second half of 2015 by the Centro Italiano di Studi elettorali (CISE) provides information on the socio-political characteristics of the electorate of the M5S. As in France and Germany, it is not the old generation that votes with the highest share for the Eurosceptic party in the county. Rather, the interest to vote for the party of Beppe Grillo decreases by age: among the young generation 33% voted for the M5S, in the old generation only 19% did. As in Germany and France gender and education are an important factor in Italy to explain the electorate of M5S. Concerning gender, more men (39%) than women (23%) voted for the party. Looking at the level of education one can detect an prominent  difference to the other two countries:  instead of being popular among voters with a low level of education (20%), the EU-sceptical party in Italy has a high share under voters with a high level of education (33%).

Despite the common assumption, that the young generation is more pro-European than the old one, the opposite appears to ring true: In Germany 3% more young voters voted for the AfD than elderly did, in France as many as 15% and in Italy 14%. But why is that? And what is the reason that particularly in France and Italy the young generation voted for Eurosceptic parties?

Certainly one could say that the situation in each country is different and that the parties follow dissimilar programs, and that therefore a generalization is impossible. For example, the AfD and the FN can be assigned to the right spectrum, while the Five Star Movement is considered as a left-wing party. However, it is not that simple. It is essential to look at the problems that the voters see in Europe because these influence the voting behaviour. According to a Euro barometer survey these are common in all three countries: immigration, terrorism and the economic situation.

From these facts, the following can be deduced: Many young voters are sceptical about the work of the European Union as the EU seems not able to solve the biggest current problems such as the refugee crisis and terrorism. However, the old generation probably has a similar point of view concerning these issues. But what makes the difference between young and old is the third problem seen in the EU, namely the economic situation: While most elderly have their working life already behind them and their pension secured, the young generation has a greater fear of both the financial and social decline. Youth unemployment is very high – especially in France (24%) and Italy (39%). This also explains why the Euro-sceptic parties are more successful in these countries than in Germany, where youth unemployment is around a steady 7%. For the economic problems young people view, among other things, the European financial policy as responsible. The proposal of the Five Star Movement to quit the euro zone shows that the Euro is blamed for the economic problems in Italy. In France, thinking seems similar: If we do not pay more contribution funds for the EU, more remains for us and the economic situation will improve – the example of Great Britain will tell if this argument is realistic.

These are examples of the impossible search for simple solutions to complex issues. In addition, we must not forget that not only the age, but also other factors such as gender and the level of education affect voting behaviour. In all three countries more men than women vote for Eurosceptic parties. In Germany and France voters with a low education were more likely to vote for the AFD and the FN than those with a high level of education. One reason for this voting behaviour could be that voters with a low level of education perceive the influx of refugees and immigrants as a threat to the labour market, because they often compete for similar jobs. In Italy, however, the opposite is true, here especially voters with a high level of education vote for the M5S. This might be explained by the fact that even people with higher education have difficulties in finding a permanent job in Italy.

Nevertheless, a general formula for the prototype voter of a Eurosceptic party does not exist, therefore one can only come to general conclusions. Moreover, in the elections national problems often stand in the foreground and a survey on the opinion of different age groups on the EU does not yet exist.

In fact, especially the young would have good reasons for being pro-European. But the first impression can be deceiving: The young generation votes more anti-European than the old generation does. Frustration and hopelessness of the youth could lead to an even greater electoral success of the AfD, FN and M5S in the future which would weaken the EU. Therefore, it must be in the EU’s interest to perceive the reasons for Euroscepticism and to act on them. To change the voting behaviour, the labour market must be improved. An EU social policy could be developed to help those which are without labour. However, it should be kept in mind that the responsibility for many problems such as youth unemployment lays on the national levels. In this respect, the EU could assist individual countries to lower youth unemployment and to guarantee equal opportunities. The young generation needs to see the advantages of the EU, only then the European project can continue.

Inga is currently pursuing a Double Master´s Degree in International Relations at the University of Kent, after studying European Studies at the University of Maastricht, with a semester in Spain as an Erasmus student. Beyond her studies, she is interested in European politics and policies, particularly in the EU’s relation with Russia, that is why learning Russian and the Russian culture is her new goal to achieve.  Next to her studies, she is has worked for the European Parliament as an intern and participated in several MUNs around Europe.