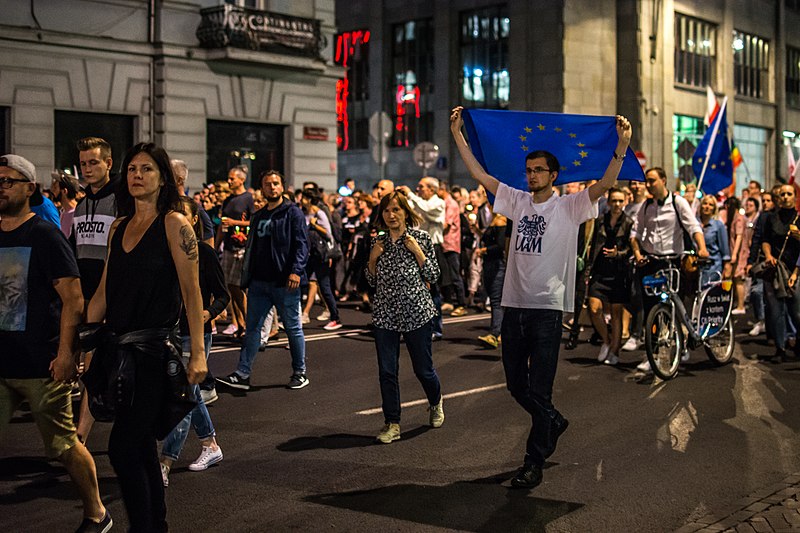 For a very long time Poland has been seen as the epitome of a successful political and economic transformation from socialism to a capitalist regime. This sweet picture started collapsing two years ago. In fact, the ultra conservative party Law and Justice (PiS), since its parliamentary victory in 2015, has controversially attempted to reform the whole judicial system in Poland, partly proving a scarce respect for the legal and democratic values on which current European order is built. In particular the PiS government put at risk the fundamental principle of the rule of the law.

This term indicates the superiority of the law over a nation, thus implying that everybody, lawmakers or judges included, are subjected to the law if they are on the area where it is in force.

Under the leadership of Jarosław Kaczyński, the PiS executive first tried to disassemble the power of the constitutional court, by electing few of its judges in an unconstitutional way, and by refusing to respect the definitive and generally binding nature of the its judgments.

Successively, the executive sought to empower the Polish Minister of Justice with the ability to remove the presidents of all courts of general jurisdiction, even in the absence of any real justification, and to replace them with his own followers. The newly appointed presidents would thus be grateful to the government for being nominated, and could easily return this favour by punishing judges in case of disobedience to politicians, sending them to unpopular court’s departments.

Considering how easily judges can be intimidated, the rule of law in Poland seems under attack. Moreover, the law becomes a very dangerous tool in the hands of political authorities. Indeed, criminal law enables them to remove any opposing politician from public life, as a criminal conviction is followed by a disqualification from being Member of Parliament. Consequently, if both the prosecutors’ offices and the courts, including the Supreme one, finish under the control of the executive, the political pluralism of the State may be in danger. Political control of the courts can also vex businesses. The Minister for Finance is able to question any tax returns filed in the last six years. In any country, if the tax administration questions a return, the tax decision can be appealed to a court which is independent from the administration. In a country in which both the administration and the courts are fully controlled by the same authority (the executive), appeals are deprived of any gist, especially if beforehand a clear directive, that the state requires to find funds in order to finance expensive social programs, is given.

These possible interferences of the executive power in the proper administration of justice caused the spread of social protests and manifestations across the country, that forced the president of Poland, Andrzej Duda, member of the PiS, to veto on the most questionable laws of his same party. Although, President Duda unlikely will continue to stand up against his party’s leaders as already testified by the negligible content of the substitute draft laws which have been just presented by him.

As a consequence, strong criticism has also come from western democracies, often comparing Poland, under the rule of its ultra-conservative government, to the Hungary under the presidency of Viktor Orbán. Unfortunately the Polish situation may even be considered worse. The Hungarian government has constitutional majority and thus act in a weak legal framework. Instead, the Polish ruling party, despite having won the elections in 2015, has not gained the majority needed to legitimately change the basic law, so that it has often decided to violate the Constitution without hesitation. In this context it doesn’t seem a coincidence the recently renewed friendship between Poland and Turkey where in the aftermath of last year’s failed coup, hundreds of judges were imprisoned.

Article 7, the EU infringement procedure to be used by the European Commission against member countries that have committed fundamental rights violations, may be the best possible solution for Poland to reestablish the super-partes character of the law, but also for EU to prove to be more than a common market. The lesson history has taught to Europe is in fact that the defense of democratic values, peace and order on our continent should not only be up to a single nation but requires a European responsibility and actions from every member state of the European Union.

Bartłomiej Kupiec is the 2017-18 EST Ambassador to Poland. Feel free to contact him at poland@esthinktank.com.