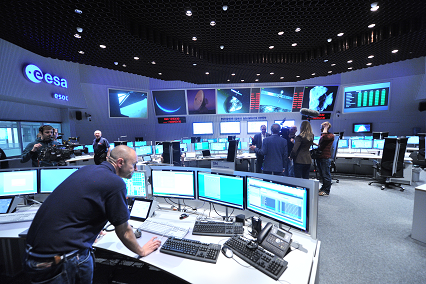 The EU has shown interest in furthering its space competencies since the ratification of the Treaty of Rome. In the 1960s, nonetheless, space-related activities fell exclusively under the competences of national governments (Mazurelle, 2009). The establishment of the European Space Research Organisation (‘ESRO’) and the European Launcher Development Organisation (‘ELDO’) as a model of governance of European space capabilities marked a turning point within the European-level space competencies. Although both organisations were enacted separately from the then-European Economic Community dimension, the need to create and shape a space capacity at the European level became evident.

The European Space Conference (‘ESC’) was created in 1966 with the aim of filling the policy gaps left by ESRO and ELDO in the previous years. Until 1975, ESRO, ELDO and the ESC acted as a troika in the European space scope. The signatory states decided to combine the mandates of the three organisations and created a separate entity – ESA. The newly established institution was conceived as parallel to the now-EU (ibid.).  As the EU developed a rising interest towards space policy, with the ESA affirming itself as the leading European actor in such a field, the two institutions began to work towards fostering stronger relationships with one another. The relationship would entail cooperation on scientific projects, whereby the ESA would provide technological resources and the EU would offer political guidance and funding (IFRI, 2011).

On a practical level, the Lisbon legal order introduced an important provision – Art. 189 TFEU – aimed at the long-term goal of achieving a European space policy. Art. 189(1) holds that, in order to encourage scientific progress, the EU may ‘promote joint initiatives, support research and technological development and coordinate the efforts needed for the exploration and exploitation of space’. This provision evokes the concept of space policy as a means through which the European policymaking dimension can be enhanced (Wouters and Hansen, 2013). To this end, the European Parliament and the Council are entrusted with the role of providing the necessary measures for the creation of a European space programme – with the exception of the harmonisation of the laws of the Member States. Most importantly, however, Art. 189(3) TFEU confers upon the Union the task of fostering ‘any appropriate relations with the European Space Agency’, but the means and scope through which to achieve this goal are not provided.

Against this background, the Commission produced a series of policy documents with the purpose of furthering the capacity of Art. 189 TFEU. Most importantly, the Communication of November 2012 represents an attempt to clarify the terms of the relationship between the EU and the ESA, but still did not quite manage to accomplish such goal. Firstly, it sets a somewhat elusive term goal for the 2020-2025 five-year period to fulfil the ambition of strengthening EU-ESA relations. More interestingly, it defines some of the structural pitfalls of the current space governance model, focusing on the absence of policy coordination and the asymmetry in both its membership and mandate. Lastly, it sketches out some future prospects for the EU-ESA relations and it alludes to the possibility of eventually bringing ESA within EU legal order without, however, providing further details (Wouters and Hansen, 2013).

Additionally, it is important to pinpoint that the role of Member States within this framework cannot be disregarded. This is not only due to the ESA’s status as an intergovernmental organisation, but also because Art. 4(3) TFEU states that, in the areas of scientific progress such as space, the Union can exercise its competence providing that it does not limit Member States from exercising theirs.

The legal framework of the EU-ESA relationship

The legal relationship between the EU and the ESA is sealed by a Framework Agreement that entered into force in May 2004. The agreement provides that the two parties shall meet periodically to coordinate their activities to the fullest extent (Art. 6 thereof). It also establishes three different bodies responsible for shaping the institutional mechanisms for cooperation between the two organisations. The first is the Space Council – a series of concomitant meetings of the Council of the EU and the Council of the ESA at the ministerial level, whose competencies and objectives revolve around ensuring a smooth implementation of the Framework Agreement and cooperation between the two parties. The second is the Joint Secretariat, which is in charge of facilitating the Space Council’s meetings by implementing the guidelines and enforcing the rules of procedures; the Joint Secretariat is composed of EU officials and members of the ESA Executive. Lastly, the third body established by the Framework Agreement is the High Level Space Policy Group (‘HSPG’). The HSPG is envisioned as an intermediary between the representatives of the EU Member States and of ESA, with the aim of reaching a deal on the implementation of the Framework Agreement (Mazurelle, 2009).

Other than renewing the Framework Agreement, not much has been accomplished in order to enrich and further clarify the relationship between the EU and ESA. Moreover, both the EU and ESA Council have increasingly shown signs of institutional fatigue, as evidenced by the decreased rate of Space Council meetings (Wouters and Hansen, 2013). Whereas the Space Council gathered three times between 2004 and 2005, it convened only once in the following six years (ibid.). However, in 2016, the European Commission and ESA made an attempt to deepen their coordination with the objectives of securing the role of Europe within the most prominent space industries in the world and of guaranteeing the integration of future space-related scientific progress into European societies (ESA, 2017). Subsequently, the Joint Statement on Shared Vision and Goals for the Future of Europe in Space was established in December 2016. The Statement, articulated in five main points, provides a list of goals that are to be achieved in order to foster a more decisive role for Europe in the space sector, both from a scientific and political point of view.

The EU-ESA relations have also led to the achievement of landmark scientific progress in the last few years. The European Commission has, for instance, participated in ESA-led programmes Galileo and its Ground Mission Segment (‘GMS’). Originally developed in the 1990s, Galileo is a European navigation satellite system and was launched in 2011, but its services only became available from 2016 (ESA: Galileo Navigation, 2016). The GMS, on the other hand, is the system responsible for generating navigation data messages (ESA, 2009). These projects, and their related funding, were initially framed in the scope of the then-Community’s transport policy under the TEC (Mazurelle, 2009). The most recent flagship joint programme of the EU and ESA is Copernicus, namely an Earth observation scheme. In this case, again, ESA retains the technical role of managing the data delivered from the satellites, whereas the Commission is in charge of the general leadership (ESA: Copernicus Observing Earth, 2016).

It is argued in the scholarship that the EU-ESA cooperation on scientific projects is underdeveloped and rather unclear. Particularly, the lack of a thorough structure in which to frame such cooperation emphasises the legal stalemate of the EU-ESA relationship dimension and it alludes to the fact that the funding and managing tools of the EU are unsuitable to the space project overseen by ESA (Mazurelle, 2009). The provisions offered in the Lisbon Treaty are not very specific, and the Communication of 2012 did not quite manage to clarify them. Even when cooperation was actually achieved to pursue scientific projects, the framework established was somewhat scarce. Thus, in order to foster a more stable cooperation, the legal basis upon which the EU-ESA relations lie should be revised and made more thorough. Perhaps the Framework Agreement should be further developed rather than merely renewed, and more documents clarifying the EU space capacity and its relationship with the various stakeholders should be issued. Lastly, the project of integrating ESA within the EU authority should be explored in more depth at the policy level.

Communication from the Commission to the Council and European Parliament, ‘Establishing appropriate relations between the EU and the European Space Agency’, 14.11.2012, COM(2012)67

ESA: Galileo Navigation. (2017) What is Galileo?. Retrieved 30.04.2020 from: https://www.esa.int/Our_Activities/Navigation/Galileo/What_is_Galileo